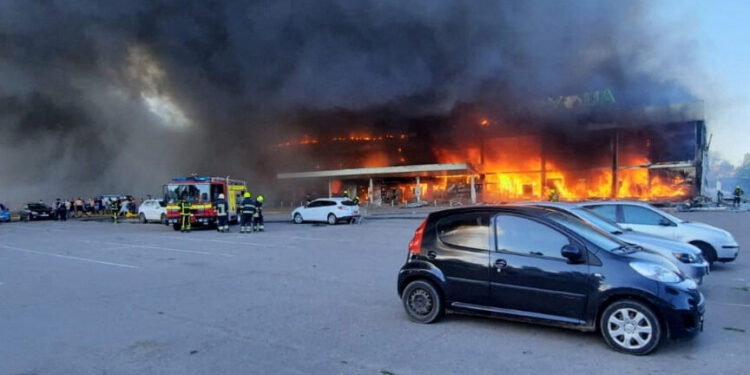 The president of Ukraine said an estimated 1,000 people were in the building at the time of the strike, which struck near a train station in the industrial city of Kremenchuk.

Post-strike videos posted online show fire raging as aid workers frantically tried to extinguish the flame and civilians loaded the wounded into ambulances. In footage that appeared to have been taken by people running for the exits, they showed themselves navigating through a thick cloud of debris and dust as they clambered over broken windows, doors and crumbling walls.

On Monday evening, Ukrainian media reported that 115 firefighters had extinguished the massive blaze and rescuers continued to search for survivors in the rubble.

Located along the Dnieper River, Kremenchuk is an important Ukrainian industrial center with factories producing railcars and trucks. It is also home to Ukraine’s largest oil refinery, which has been repeatedly attacked by Russian missiles, according to local news media, as part of Moscow’s strategy to destroy the country’s fuel production and storage infrastructure.

The Ukrainian Air Force said in a statement to Telegram that the shopping center in Kremenchuk had been hit by missiles fired by long-range bombers from the Kursk region of Russia.

President Volodymyr Zelensky said the mall posed “no danger to the Russian military,” in comments to Telegram. “No strategic value. Just people’s attempt to live normal lives, which is what makes the occupiers so angry.”

The attack on Kremenchuk came after Russia fired more than 65 rockets at Ukraine in a sudden escalation this weekend. A strike in the northeastern city of Kharkiv on Monday killed four people and injured 19, according to local authorities.

Anton Gerashchenko, an adviser to Ukraine’s interior minister, visited the site of the attack. He posted videos to Telegram of himself standing in front of a smoking mess as rescuers combed the scene.

“Look what the Amstor shopping center has become,” he wrote in a caption, “which thousands in Kremenchuk loved to visit.”

Pro-Kremlin journalists were quick to deny Russian involvement and came up with alternative theories about the cause of the fire.

Andrei Rudenko, a reporter for Russia’s state television network Rossiya, called the fire “a provocation” and questioned the claim that there were 1,000 people in the mall by citing images of the empty parking lot in front of it.

“There’s a sense that they set it all on fire and shot it to make the picture look good,” he said in his channel on Telegram, a social messaging app.

Other pro-Russian commentators suggested a major engineering factory behind the mall had been targeted, saying the mall itself suffered collateral damage.

Kremenchuk had a population of nearly 220,000 people before the Russian invasion of Ukraine began in late February.