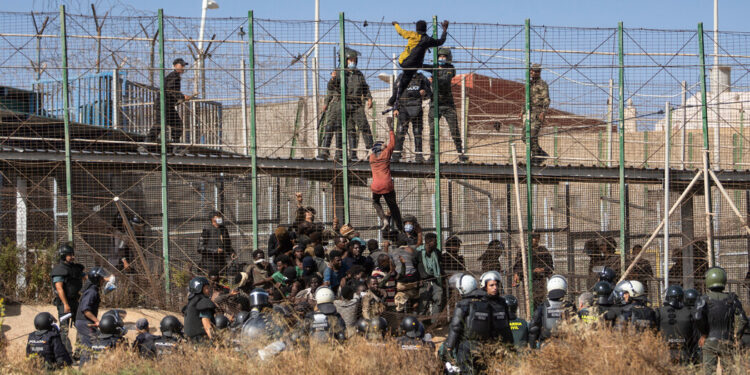 Moroccan officials on Saturday said 18 migrants had been killed and many more injured after what authorities described as a stampede during an attempted mass crossing into the Spanish enclave of Melilla, in North Africa. But human rights groups have accused security forces of indiscriminate violence at the border crossing and have called for an investigation into the deaths.

A spokesman for the Spanish government office in Melilla said about 2,000 migrants approached the enclave at dawn on Friday. He said 500 people managed to enter a border control area after cutting a fence, leading to violent clashes that also injured security officers on both sides of the border.

According to Moroccan authorities, many migrants died after trying to climb over the border fence, while 76 others, as well as 140 Moroccan security agents, were injured. At least 130 people were able to successfully cross Melilla, where they are now being held in a temporary immigration shelter, according to Spanish officials in the enclave.

In a video of the episode shared by the Moroccan Human Rights Association and confirmed by geolocation, dozens of bodies and injured men can be seen piled up along the border fence, surrounded by Moroccan security agents in riot gear. Other footage shows a Moroccan security officer visibly beating wounded migrants with a baton as they squirm on the ground before a colleague tosses another man’s limp body onto the pile.

Melilla and Ceuta, another Spanish enclave, have the European Union’s only land borders with Africa, making them a frequent target for mass crossings. Friday’s episode was the first since the border reopened in May, two months after diplomatic relations between Spain and Morocco were restored. That relaxation followed a decision by Madrid to support the North African country’s autonomy plan for Western Sahara, a former Spanish colony on the northwest coast of Africa.

Prime Minister Pedro Sánchez of Spain condemned the attempted mass crossing, describing it as an attack on his country’s “territorial integrity” and adding that Spanish security forces had worked with their Moroccan counterparts to carry out “a well-organized, violent attack”. to ward off.

At least six human rights organizations in both Morocco and Spain have called for an investigation. Amnesty International expressed “deep concern” at the events, and the Spanish Commission for Refugees on Saturday criticized what it called “the indiscriminate use of force to manage migration and control borders”.

Rights groups on the ground also indicated that the death toll was likely to rise. The Moroccan Human Rights Association reported that 27 migrants had died, according to the group’s most recent census, but that figure could not be immediately verified.

“This is a catastrophe,” said Omar Naji, vice president of the rights organization, one of the largest non-governmental organizations in Morocco. “No medical assistance was provided in the hours following the clashes. They were left on the ground for hours,” he said, referring to the migrants, adding his voice to those asking for an investigation.

A spokesman for the United Nations Refugee Agency told DailyExpertNews that its officials are currently unable to access the injured, who were being treated in Moroccan hospitals. He added that the agency is very concerned about the number of victims.

The agency “calls on the international community, in accordance with the principle of shared responsibility, to strengthen access to legal avenues in order to reduce the risk of such tragic events in the future,” the spokesman said.

In March, in the days before Morocco and Spain ended their diplomatic dispute, there were a number of attempted mass crossings to Melilla, including one involving 2,500 people – the largest attempt on record.