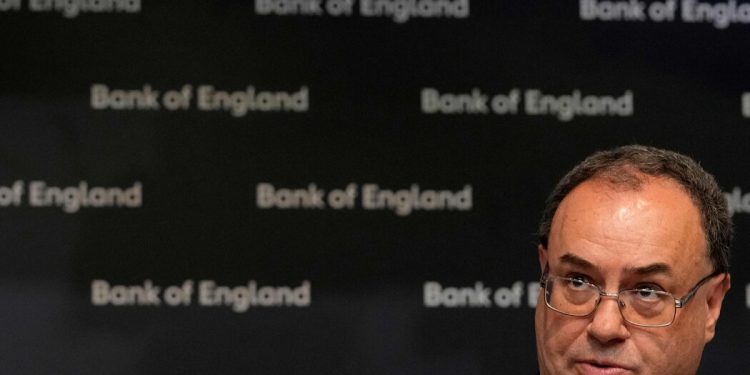 With energy, food and commodity prices soaring after the Russian invasion of Ukraine, the impact is being felt strongly around the world. In Britain, the central bank pushed interest rates to their highest level in 13 years on Thursday in a bid to halt rapidly rising prices, even as the risk of a recession mounts.

The bank forecast that inflation would rise to its highest level in four decades in the last quarter of this year and that the UK economy would contract by nearly 1 percent.

“Global inflationary pressures have risen sharply in the run-up to and after the invasion,” Bank of England governor Andrew Bailey said on Thursday. “This has led to a material deterioration in the outlook,” he added, for both the global economy and the UK economy. On an annual basis, the economy is also expected to contract next year.

Prices in the UK rose 7 percent in March from a year earlier, the fastest pace since 1992. The central bank predicts inflation will top 10 percent in the final quarter of the year, when energy bills rise. of households will rise again when the government’s energy bill price cap is reset in October. Ten percent would be the highest percentage since 1982.

The rapidly changing landscape was reflected in the outlook for economic growth. By 2023, the bank now predicts, the economy will shrink by 0.25 percent, instead of growing by 1.25 percent, as it predicted three months ago.

On Wednesday, policymakers at the US Federal Reserve raised interest rates by half a percentage point, the biggest jump in 22 years, in a bid to quickly cool the economy as inflation hits its fastest pace in four decades. The US central bank also said it would reduce the size of its balance sheet, saying it would let bond holdings mature without reinvestment.

On Thursday, the Bank of England said its staff would have plans to sell the government bonds it bought, but a decision on whether or not to start the sale has not yet been taken. The bank stopped making new net purchases late last year after buying £875 billion ($1.1 trillion) worth of bonds. The bank said it will provide an update in August.

The outlook for the global economy has been distorted by the war in Ukraine, which is pushing up the price of energy, food and other commodities such as metals and fertilizers. The Covid pandemic continues to disrupt trade and supply chains, particularly with closures due to China’s zero-COVID policy. Last month, the International Monetary Fund cut its forecast for global economic growth this year to 3.6 percent, from 4.4 percent forecast in January.

The challenge for policy makers in Britain is great. The Bank of England has a mandate to hit 2 percent inflation. At the same time, there are indications that the economy is already slowing, consumer confidence is falling and companies are concerned that price increases will weigh on consumer spending, a key driver of economic growth. With inflation at its highest in three decades and wage growth unable to keep up, UK households face painful budget pressures.

Household disposable income, adjusted for inflation, is expected to fall 1.75 percent this year, the second-largest decline since the record began in 1964, the bank said. The central bank’s challenge is to slow inflation to ease the pressure on households and businesses without cooling the economy too much and plunging into recession.

Monetary policy must therefore tread a narrow path between the heightened risks of high inflation and a tight labor market on the one hand, and the further blow to activity from the decline in real incomes on the other. Bailey Thursday. †

When considering that alternative, votes to raise rates showed that policymakers believed cost pressures to businesses and consumer prices would continue unless they acted. Companies expect to see a sharp increase in selling prices for their goods and services in the near term, as a result of the sharp increase in spending, the bank said. At the same time, inflation may become more entrenched as unemployment is low, forcing companies to raise wages to meet their workforce needs.