Battered by Russian shells, a monastery remains loyal to Moscow 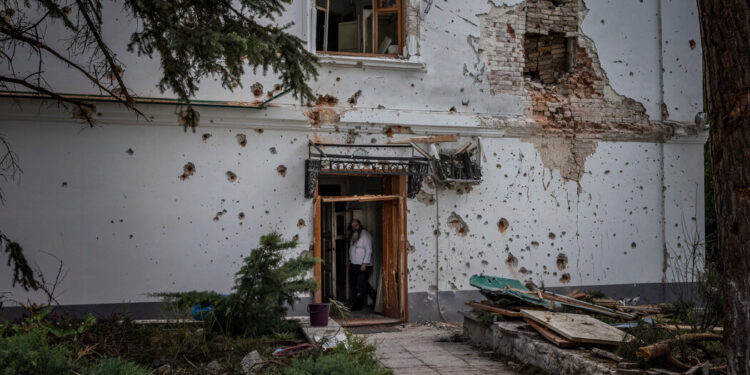 The monks and nuns, imprisoned in a monastic complex in eastern Ukraine, deal with daily bombardments from Russian artillery. And yet they remain faithful to the Russian Orthodox Church.

SVIATOHIRSK, Ukraine — Of the hundreds of battlefields across Ukraine, the caves’ Sviatohirsk Monastery is certainly one of the most absurd.

The sprawling complex of onion-domed churches built into a high bank of the Siversky Donets River is considered one of the five holiest sites in the Russian Orthodox Church. Yet it lies directly in the firing line of the Russian army as it advances into eastern Ukraine.

Russian shells aimed at Ukrainian troop positions regularly go astray and hit the monastery, with terrifying screams and metal thumps echoing through the graveyards. They tear through building walls, leaving gaping holes in the terrain; At least four monks, priests or nuns have been killed, Ukrainian police say.

The shelling is yet another example of the collateral damage the Russians inflict with wandering or random artillery attacks. And it has forced the monks and nuns trapped here into some form of wartime rationalization.

Along with many of the hundreds of displaced persons who sought safety in the complex, they are loyal to the Russian Church and loyal to its Moscow leader, Patriarch Kirill, who blessed the Russian invasion. But the constant bombardment by the Russian army is a contradiction that they must reconcile.

“Yes, they are shelling the monastery, but they are probably just following orders,” one nun, Sister Ioanna, said of the Russian soldiers. “We also pray for them and ask that they realize what they are doing.”

Sister Ioanna was praying in the hallway of a convent building last Tuesday morning—reciting the Psalms from the Sixth Catechism, she recalled—when a shell hit and a wall exploded. Bricks and shrapnel flew around.

A brick injured her on the head, she later said in a hospital interview. A monk next to her was hit by shrapnel in his stomach and died before he could be evacuated, Sister Ioanna said.

On a recent visit to the monastery, grenades hitting the grounds threw up columns of dirt and smoke, followed a few seconds later by the clatter of debris that fell on the church domes. Monks took cover, their black robes fluttering.

Those who did not survive previous weirs are now buried in freshly cut graves in a courtyard.

All around the site, the whitewashed walls are popped by shrapnel, windows have been blown out. Holes blown into walls and craters in graveyards testify to direct hits.

Inside the buildings, the cellar walls are decorated with Orthodox icons. The people crammed in there crossed with each horrifying thud outside. Many had gone to seek shelter from shelling in their own villages.

“I have a feeling that God will protect me here,” said Volodymyr Slipuchenko.

But as the booms resounded, Mr. Slipuchenko hesitantly said, “I don’t know if it’s really safe.”

A woman crossed herself and muttered, “God save us.”

On Saturday, Ukraine’s President Volodymyr Zelensky said about 300 civilians, including about 60 children, were hiding in the monastery. The regional police say they cannot evacuate the children because the access road is regularly shot at.

The destruction at the site is likely to reverberate in Orthodox Christian politics.

The post-Soviet schism between the Russian and Ukrainian churches was a religious backdrop to the war. The Ukrainian Church has declared independence, but thousands of parishes in Ukraine remain loyal to Kirill, the Patriarch in Moscow. If Ukraine wins, the Russian Church will almost certainly be driven out for good.

But not the monks in the Sviatohirsk Monastery; they remain aligned with Russia. Indeed, this has been considered the most Russian-oriented of the most important religious sites in Ukraine for years.

“They justify themselves and try not to face the reality that Russia has invaded Ukraine” and attacked their monastery, said Ihor Kozlovsky, a theologian and authority on Orthodox churches in Ukraine.

Over the past week or so, the front line around the city of Sviatohirsk has advanced to within about a mile of the monastery gates. Russian artillery appears to be aimed at a bridge over the Siversky Donets River – just 15 to 20 meters from the monastery wall – and Ukrainian positions nearby. But predictably with unguided projectiles, there are wayward shots hitting the cloister instead.

Ukrainian officials accuse Russian troops of being reckless and careless in their shelling.

“Nothing is sacred to them,” Anton Gerashchenko, a deputy interior minister, said of the monastery’s destruction. “They could go around, but they decided to shoot through instead.”

On Saturday, fighting started a fire that set fire to the wooden All Saints Hermitage church, the largest wooden church in Ukraine, Ukrainian officials said. Russia blamed Ukrainian troops for the fire.

Dating back to the 16th century, the monastery is a historically, culturally and religiously important place for both Russians and Ukrainians.

“It is a jewel of Orthodoxy,” said the theologian, Mr. Kozlovsky.

It has also been a difficult issue for the Ukrainian government to weigh religious freedom against loyalty in wartime.

The monks of the monastery, considered traitors by Ukrainian nationalists, have been staunchly pro-Russian for years, claiming they have the right to follow the religious path of their choice, even when their country is at war.

For example, the monastery’s leadership has subordinated itself to a high-ranking cleric in Donetsk, the capital of one of two Russian-backed breakaway regions in eastern Ukraine. They “declare war by saying it is God’s plan, but not the plan of the Russian army,” Kozlovsky said.

On Monday, the day before Sister Ionna was injured, Ukrainian police said artillery killed a priest, monk and nun. The monks buried the dead in graves in the cemeteries.

Authorities say it would now be dangerous to evacuate those hiding at the site. A perilous, winding road leads to the monastery, which passes through the Holy Mountain Wilderness, a national park of dense deciduous trees, and then onto a high grassy plateau. There, smoke from fresh artillery charges rises in many individual columns, as if someone had lit campfires on the plain.

The sidewalk on this road is full of shell craters in places. Closer to the monastery, the route is lined with boarded-up stands that once sold icons and holy water to the pilgrims who arrived in peacetime.

After Russia invaded in February, believers expected security. The monastery has hosted internally displaced persons for years, dating back to Ukraine’s conflict with Russia-backed separatists that began in 2014. “This is what they thought,” said Colonel Svyatoslav Zagorsky, a regional police chief. “But look, as we see, experience teaches us just the opposite.”

The Russian army first fired artillery hitting the monastery in March. But the most intensive bombing started two weeks ago.

One of the buildings damaged is the Church of the Intercession of the Blessed Virgin, according to a list of strikes on the site provided by the Ukrainian government.

During Friday’s visit by a reporter and photographer, artillery shells slammed into a park on the edge of the monastery, landscaped with yellow roses near the riverbank.

A horrible feeling of pressure waves from the explosions rippled through the churches.

A few monks gathered on the stairs to a cellar, sweating and wide-eyed, seeking safety. But while they wanted hostilities to end, they refused to condemn the Russian army.

A monk, Brother Prokhor, said, “We pray for peace in all the world, so that no one shoots anywhere.”

But when asked what he thought of the Russians shelling the monastery, he hesitated to answer. “I don’t know who’s shooting,” he said. “They shoot from far away – I can’t see them.”