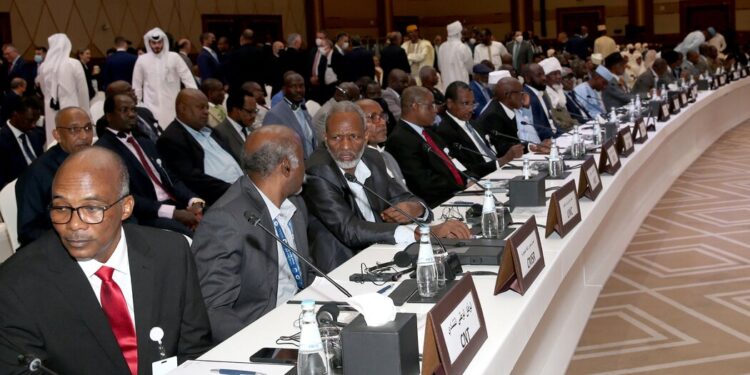 DAKAR, Senegal – Chad’s military government and more than 40 rebel groups signed a ceasefire agreement in Qatar on Monday, paving the way for reconciliation talks later this month as the Central African nation seeks a way out of a troubled political transition.

But the signing of the agreement, after five months of negotiations, was overshadowed by the absence of Chad’s most powerful armed group, which refused to join the accord, making the prospects for a return to stability all the more precarious.

With less than two months to go into that transition period, Mr Déby’s military government and rebel groups in Doha, Qatar, are negotiating what comes next. After nearly five months of negotiations, they agreed on Monday to hold national reconciliation talks in Chad’s capital, N’Djamena, later this month, which would pave the way for democratic elections.

But the absence among the signatories of one of Chad’s main rebel groups, the Front for Change and Concord in Chad (FACT, with its French acronym), cast doubt on the outcome of the forthcoming talks. According to Chadian military authorities, Mr Déby was killed last year while visiting troops fighting the FACT.

On Sunday, the group’s spokesperson said said the accord did not take into account key requests such as the immediate release of prisoners and equality between the government and opposition groups during the upcoming reconciliation talks.

So the agreement may bring some temporary stability, but lasting peace is unlikely, said Remadji Hoinathy, a Chadian political analyst in N’Djamena.

“Some key players have long understood that the only way to have a frank discussion in Chad is through armed insurgency,” said Mr Hoinathy, an analyst at the Institute for Security Studies.

Even as a wide mix of political parties, rebel groups and the military government are meeting in N’Djamena this month, Mr Hoinathy said: “Those who have not signed the accord may as well invite themselves to the conversation – but by arms. ”

Mamadou Djimtebaye, a Chadian political journalist, said that scenario could have been true years ago, but not anymore. “That’s an old framework — people won’t let it happen,” he said. “They want elections, and both the government and FACT have understood that.”

Issa Ahmat, the spokesman for FACT, said any resolutions from the reconciliation talks would likely be biased in favor of the government. But he said violence was not on the table. “We have not closed the door to dialogue,” said Mr. Ahmat in a telephone interview.

The presence of numerous groups in Doha – more than 50, nearly 10 of whom rejected the accord – highlighted the key role they have played in Chad since the country’s independence from France in 1960. The country’s history has been marked by military dictatorship and repeated attempts to seize power by such groups, often operating from neighboring Libya or Sudan.

In addition to the ceasefire, the agreement signed on Monday includes a disarmament program; amnesty and safe return of rebels outside Chad; the end of recruitment by rebel groups; and the release of prisoners on both sides.

The Union of Resistance Forces, which attempted to oust the elderly Mr Déby in 2019 by sending a column of fighters in 50 pickup trucks from Libya — only to be beaten back by French airstrikes — signed the agreement. But another powerful group, the Military Command Council for the Salvation of the Republic, rejected the promise.

With the transition period likely to exceed the 18-month deadline, Chadians are growing increasingly frustrated with the junta.

In May, supporters of the country’s main opposition political group, Wakit Tama, were arrested after protests against the military government. They also denounced France’s presence in the country and its support for the military leaders, echoing rising anti-French sentiment in former French colonies.

France has long regarded Chad, a country of 17 million inhabitants, as a strategic partner in the Sahel region. The French counter-terrorism operation, Operation Barkhane, has been headquartered in N’Djamena since its launch in 2014.

But critics have pointed to France’s double standard. In Mali, it was unwavering with military leaders taking power in a coup last year, but it was more lenient with Chad’s government, although Mr Déby’s takeover after his father’s death was also unconstitutional.

Human rights groups have also criticized Mr Déby for his widespread crackdown on peaceful protests and the arrests of hundreds of opposition members and supporters.

Jérôme Tubiana, an independent expert on Chad, said: “Key groups are missing, but the government’s plan may not have been to have all those groups as signatories.” He continued: “Instead, it may have tried to avoid negotiations between the government on the one hand and all groups together on the other.”

“If the government had a divide-and-rule strategy, it would have won.”