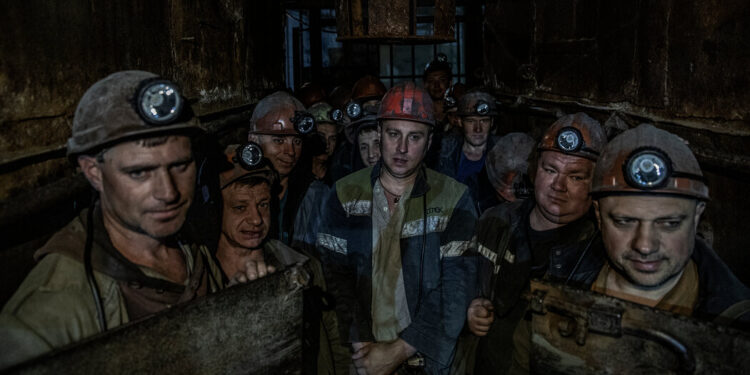 DOBROPILLIA, Ukraine – When Aleksander Maryinych enters a metal cage and descends into the darkness with dozens of other miners for his six-hour shifts, the horrifying thumps of artillery warfare are replaced by the clatter of railcars and the screeching of machines buried deep in the earth. .

Plumes of dust and smoke from Russian bombing are exchanged for clouds of fine coal dust, which seep into the crevices of the miners’ skins, giving their eyebrows a distinctive black color.

“When I’m in the mine, I forget about the war because I have to focus on other things,” said Maryinych, 33, a drilling operator at a private coal mine run by the DTEK energy company in the Dobrapil district, along the front lines of the war in the Donetsk region of eastern Ukraine. “Everything is black and white and there are risks.”

Accidents are common in Ukraine’s aging coal mines. Methane gas, a byproduct of mining, is highly explosive. In 2007, a methane explosion killed more than 100 miners, the deadliest mining accident in the country’s post-Soviet history. Last year, nine miners were killed when a steel elevator rope broke at a mine in an area of ​​Donbas controlled by pro-Russian separatists.

The war has disrupted global energy markets and pushed the cost of oil and coal to record levels. A brutally cold Russian winter, the economic rebound from the coronavirus pandemic and the Russian invasion of Ukraine – as well as the ensuing sanctions – came as the world generated more electricity than ever from coal, despite calls to fight climate change.

Global coal consumption is expected to reach a record high of more than eight billion tons by 2022, and is likely to remain so until at least 2024, according to the International Energy Agency. The price of coal hit an all-time high of more than $400 per tonne in March. This month, Germany said it would restart coal-fired power stations to conserve natural gas after Russia cut gas supplies to Europe.

Despite having the sixth largest coal reserve in the world, 90 percent of which is in the Donbas region, Ukraine is at risk of power cuts due to shortages. President Volodymyr Zelensky recently announced that Ukraine will halt exports of oil, coal and gas this winter to meet its needs.

“If a missile hits the elevator shaft, it would be very difficult to get the miners out,” said Vitaly, 51, the manager of the DTEK mine, who asked for his last name not to be published for security reasons. “And if Russia destroys the power station, we can’t operate.”

If the power supply to the ventilation system goes out, methane can build up in the tunnels, he said. If the water pumps are disconnected, mines can flood and collapse. A Russian bombing attack cut electricity at the state-owned mine near the town of Seidove in April, leaving miners trapped for hours. This month, 77 miners were temporarily trapped in a mine in a Russian-controlled part of Donbas after Ukrainian shelling disrupted power.

Despite the risks, miners in Ukraine have little choice but to keep working.

Ukraine relies on coal for its industrial iron and steel sectors. Coal-fired thermal plants generate about a third of the country’s electricity. Even with deep reserves, a decades-long decline in coal production accelerated by corruption and neglect, and more recently, by pledges to the Paris climate accord, demand has long outstripped supply.

Ukraine relied on imports, mostly from Russia, but those supplies have been reduced by the war, worsening an economy already suppressed by Russian-backed separatists fighting in the Donbas region since 2014.

Ukraine’s economy was liberalized after the collapse of the Soviet Union, and many unprofitable state mines were closed. More profitable ones were privatized. Coal production fell to 31 million tons in 2019, from 164 million tons in 1990. Nearly 90 percent of production comes from private mines, the vast majority of DTEK, the dominant energy company in Ukraine, owned by Rinat Akhmetov, an oligarch who man from Ukraine.

The Donbas region used to have 82 operational mines in Russian-occupied areas, according to Mr Pavlov, who said only five were still in operation. Since the Russian invasion began on February 24, he said, at least six mines have fallen under Russian control and are no longer operating.

In the heavily shelled mining town of Vuhledar, three kilometers from Russian positions, the few remaining residents have been without water, gas or electricity for months. The nearby mines would not be able to operate even if there were workers working them.

Even the DTEK mine near the town of Dobropillia, which according to Vitaly produced more than all the state-run mines combined, was shut down in April after a mass evacuation as Russian attacks increased. Operations have since resumed, but at a slower pace.

“We never know what could happen at any moment,” said Vitaly, the mine manager, explaining that some workers had not returned after they left in April and that many services – shops, hospitals, rail and fuel supplies – have been disrupted, eliminating the challenges of running the mine. “We’re worried – we’re close to the front lines – but we’re doing the best we can. We now plan from day to day instead of month to month.”

The DTEK mine has well-maintained equipment, individual emergency oxygen masks and fire-resistant clothing. Bags of water hang from the tunnel ceilings and white fire-retardant dust sprinkles the corridors like a fine layer of snow.

More than 2,000 feet underground, tunnel temperatures can exceed 100 degrees. On a recent shift, a bare-chested worker had taken off his jacket (violating security measures) while a giant saw cut chunks of coal on a conveyor belt. A dozen miners crouched in the air so thick with coal dust that their headlights glowed like Jedi lightsabers.

“This is hard work. No one will tell, but everyone is waiting for the end of their shift to come out and call their family to see if everything is okay,” Vitaly said. “We smile and laugh, but this is a difficult time for us.”

After a recent night shift, Mr. Maryinych out into the morning sun, showered and went home to his wife, Olena, 34, and his two daughters, all of whom had returned the previous week after spending a month further west for safety.

On land near their home, the towering slag heaps are scattered across the region’s fertile plains. “Donbas Mountains”, they are called.

“Everyone here is either a miner or a farmer,” said Mr Maryinych.

He is both. His family has two plots where they grow fruit and vegetables and keep chickens. With his daughter Veronika, 7, he picked cherries and dropped them into a white plastic bucket before sitting down to enjoy their reward.

“For the people here, coal is warmth and light,” says Mr Maryinych, who has been working in the same mine near Dobropillia since he was 18. “Coal is also a reliable and regular paycheck, twice a month.”