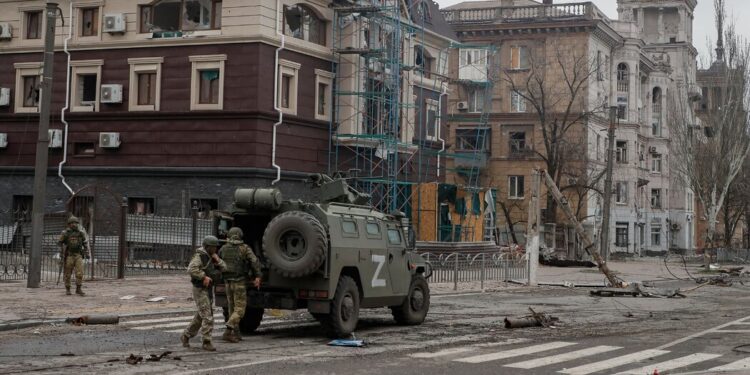 Natalia Abiyeva is a real estate agent specializing in rental apartments in the city of Nizhny Novgorod, east of Moscow. But lately, she’s learned a lot about battlefield medicine.

She found that packets of hemostatic granules can stop catastrophic bleeding; decompression needles can relieve pressure in a punctured chest. At a military hospital, a wounded commander told her a comrade died in his arms because there were no airway tubes available to allow him to breathe.

Ms Abiyeva, 37, has decided to take matters into her own hands. On Wednesday, she and two friends set out for the Ukrainian border for the seventh time since the war started in February in a van, carrying onions, potatoes, walkie-talkies, binoculars, first aid equipment and even a mobile dental kit. Since the start of the war, she said, she has raised more than $60,000 to buy food, clothing and equipment for Russian soldiers serving in Ukraine.

“It seems to me that the whole world is supporting our great enemies,” Ms Abiyeva said in a telephone interview. “We also want to offer our support by saying, ‘Guys, we’re with you.'”

Grassroots movements, led largely by women, have sprung up across Russia to crowdsource aid for Russian soldiers. They are evidence of some public support for President Vladimir V. Putin’s war efforts — as well as growing recognition among Russians that their military, which had been hailed as a world-class force before the invasion, proved woefully under-prepared for a major conflict.

The aid often includes sweets and inspiring messages, but goes much further than the care packages that Americans know from the war in Iraq. The most sought-after items are imported drones and night vision goggles, a sign that Russia’s $66 billion defense budget has failed to produce essential equipment for modern warfare.

“No one expected such a war to come,” Tatyana Plotnikova, a business owner in the city of Novokuybyshevsk on the Volga, said in a telephone interview. “I don’t think anyone was ready for this.”

Ms Plotnikova, 47, has already made the 1,000-mile drive to the Ukrainian border twice and has transported a total of three tons of relief supplies, she says. Last week, she posted on her page on VKontakte, the Russian social network, a new list of urgently needed items: bandages, anesthetics, antibiotics, crutches and wheelchairs.

Medical equipment is in high demand, in part because of the Ukrainian military’s growing firepower as the West increasingly bolsters it with powerful weapons. Aleksandr Borodai, a separatist commander and member of the Russian parliament, said in a telephone interview that the Russian side of the front needed “great quantities” of equipment to treat shrapnel and burns. More than 90 percent of Russian injuries in some areas, he said, have been caused recently by artillery fire.

Borodai said his units had noticed the use of 155-millimeter shells fired by US howitzers, and that the Russian leadership may have underestimated the West’s determination to support Ukraine.

“It doesn’t make the military operation any faster from our point of view — it makes our situation more difficult, I’m not denying that,” Borodai said, referring to Western arms transfers. “It is possible that our military leaders were not ready for such massive support from the West.”

The Ukrainian military, which is leveraging Western support for its cause, is benefiting from a much more extensive crowdfunding campaign that brings in millions of dollars in donations in items such as drones, night vision goggles, rifles and consumer technology.

Most groups that collect donations for Russian soldiers seem to operate independently of the Russian government. They usually rely on the personal contacts of volunteers in individual units and military hospitals to relay lists of what they need most urgently.

These groups are rarely mentioned in Russian state media, perhaps because they undermine the message that the Kremlin is firmly in control of the war. But sometimes the message gets through to the Russian public.

“Our service workers keep saying they have everything they need,” explained an April television clip about such volunteers, “but a mother’s heart has a mind of its own.”

Outside the state media, however, supporters of the war point to private donations as the key to victory. Pro-Russian military bloggers, some of them embedded in Russian troops, are urging their followers to donate money to buy night vision equipment and basic drones.

“Our guys are dying because they don’t have this equipment,” wrote one blogger, while “the whole West is supplying the Ukrainian side.”

The necessary equipment, largely imported, can be purchased at Russian sports stores or ordered online. Starshe Eddy, a popular military blogger, wrote that consumer drones made by the giant Chinese company DJI “have become so entrenched in combat operations that it has become difficult to imagine war without them.”

Ms. Abiyeva, the real estate agent, showed on her Telegram account a Nikon Prostaff 1000 laser-equipped rangefinder that she had bought for $400. Nikon says the item “makes seeing — and reaching — deer up to 600 meters a reality.”

“With this kind of technology, everything goes better and faster, wouldn’t you say?” Ms. Abiyeva wrote and added a wink emoji and a heart emoji.

Ms Abiyeva says she started crowdsourcing after her husband, a captain, was deployed to Ukraine and felt “powerless” to influence the course of events. She visited the hospital of her husband’s local military base and got the contact details of surgeons who had been deployed in the war. Since then, they have been sending her direct requests and passing her contacts on to colleagues.

When a surgeon at a field hospital asked for arterial embolectomy catheters to treat blockages in arteries, Ms. Abiyeva found another volunteer in St. Petersburg to make the 700-mile journey to deliver 10 of them immediately. Ms Abiyeva said that when she met the surgeon a week later on her own trip to the region, he told her that six of the catheters had already been used.

“We may have saved six lives,” she said.

The Russian military’s seemingly urgent need for essential medical equipment and basic foreign-made consumer equipment has led some Russians to question how the Kremlin managed its massive military budget, more than 3 percent of the country’s total economic output. issued. On the VKontakte page of Zhanna Slobozhan, a coordinator of donations in the border town of Belgorod, a woman wrote that talking about raising money for drones and rifle sights “makes me think the military is completely left at the mercy of fate.”

“Let’s make sure we don’t at least not let our boys down,” Ms Slobozhan wrote back. She did not respond to requests for comment.

Mr Putin visited a military hospital for the first time since the start of the war on Wednesday. He later told officials that although the doctors he met had assured him that “they have everything they need,” the government must “respond quickly, quickly and effectively to all needs” in military medicine.

Yet the idea that Russian soldiers are under-equipped in Ukraine is increasingly permeating Russian public discourse — both among opponents and supporters of the war. In a documentary about the mothers of soldiers released last weekend by Russian journalist Katerina Gordeyeva, which has been viewed about three million times on YouTube, a woman describes how her son uses a thread to reattach soles to his boots.

An association of retired Russian officers published an open letter on May 19 noting that the public was raising money for equipment the military was sorely lacking “even though the government has a lot of money.” The letter denounced Mr Putin’s war effort as half-hearted and urged him to declare a state of war, with the aim of taking all of Ukraine.

But on the ground, the concerns are more prosaic. With summer approaching, the Lyme disease ticks have disappeared and volunteers in Belgorod have made homemade repellents, put them in spray bottles and put them out.

A group of women collecting donations in the area found that some of the Russian-backed separatist forces were so ill-equipped that they used shopping bags to carry their belongings. In their Telegram account with about 1,000 followers, the group made an urgent appeal for backpacks, along with shoes, Q-tips, socks, headlights, lighters, hats, sugar and batteries.

“This is so that they understand that they are not alone,” says one of the Belgorod group coordinators, Vera Kusenko, 26, who works in a beauty salon as an eyelash extension specialist. “We hope this will be over soon.”