Families of civilian soldiers are worried and waiting in Ukraine. 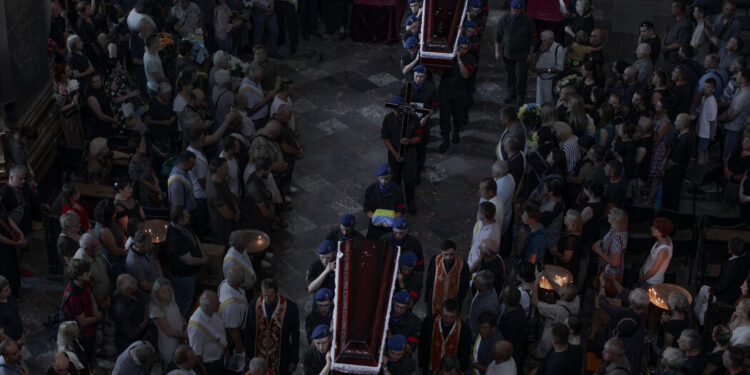 LVIV, Ukraine — As thousands of young men and women are sent to the front lines in Ukraine, they all leave behind relatives and friends who are holding their collective breath.

Because many of these fighters have no previous military experience, families across Ukraine are learning to deal with the new and unexpected realities of sons and daughters, husbands and parents, headed for war.

Liubov and Victor Polishchuk’s son Oleksii, 39, volunteered for the territorial defense early in the war. For the past few weeks he was sent east to the front lines and now they rarely speak to him on the phone.

“This situation is very frightening for us,” Ms Polishchuk said, adding that it was time for everyone in Ukraine to defend it with “everything we have: even with our lives.”

Still, she said, watching their child go to war is a challenge for anyone. And she knows that her son is only telling them part of what he sees, trying to protect them from the worst of battles.

“We rarely speak to him as his phone is usually off,” Ms Polishchuk said. “So when they go from one position to another, he calls us, and just for a few moments to say everything is okay.”

Before the war, her son had repaired windows and doors to support his wife and 3-year-old son. When the war broke out, the company closed down. So was the place where his wife worked.

He decided to join the Lviv Territorial Forces, a regional reserve force mainly responsible for low-risk tasks in the relatively safe region. But these troops have increasingly been sent to the east of the country, where the fighting is fiercest, and Oleksii was deployed there in the spring.

His parents worry that he hasn’t had enough training and equipment, but they also say his role is necessary. They continue to hope that the Ukrainian army will be victorious and that their son will return home safely.

“Someone has to go there,” said Mr. Polischuk. “Of course we would like him to be here, but it does not depend on us. We can only hope that everything will be fine.”

Most soldiers in combat roles in the East are young men, many who leave behind wives, partners and parents who bear a heavy psychological burden.

Mariia Stetsiuk, 35, has a counseling degree, lost a close friend in 2015 fighting pro-Russian separatists in eastern Ukraine. She remembers the painful waiting for news from him while he was at the front. When the large-scale invasion of Ukraine began in February, she knew others would likely need the support she’d found so hard to get.

Last month, she started an online support group for women whose loved ones are sent to war. Groups of women from all over Ukraine meet weekly via video to talk and offer mutual support.

“Unfortunately, these numbers will only grow,” Ms Stetsiuk said, “so we want to help people now.”