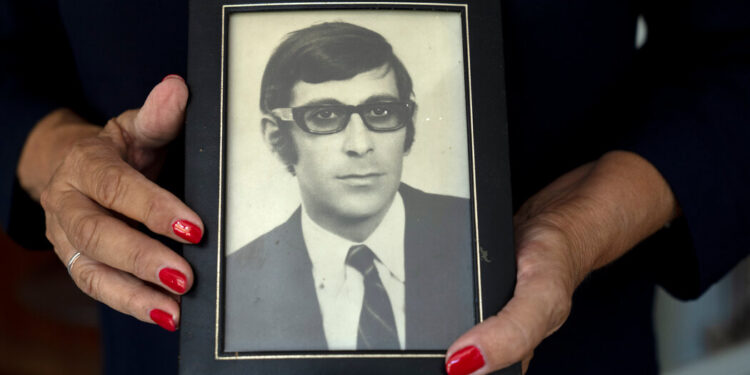 TEL AVIV – The families of 11 Israeli athletes killed by Palestinian militants during the 1972 Munich Olympics said on Wednesday they plan to boycott a commemoration ceremony planned in September in Germany to mark the 50th anniversary of the attack because of a dispute with the Germans. authorities on compensation.

The decision will put pressure on Israel’s President Yitzhak Herzog, who will attend the ceremony in Munich on September 5, to also stay away and threaten an event aimed at healing the wounds of an attack by the terrorist. group Black September. that shocked Israel and the world.

Germany’s handling of the terrorist attack, and its aftermath, remains one of the most divisive issues between the two countries after establishing full diplomatic relations between them in 1965 — a relationship already fraught with the Holocaust.

The families have long fought for more compensation for the killings of the athletes, and Israel has maintained that Germany failed to adequately protect the athletes and cover up its shortcomings before and after the attack.

The attack took place on September 5, 1972, when eight Palestinian militants jumped the fence of the Munich Olympic Village, which was guarded by only a few German police officers, according to an official report from the Israeli State Archives. Only two of the officers were armed. The militants broke into the Israeli residence and killed two team members before demanding the release of comrades held captive in Israel. Later, nine other athletes were killed, along with a German police officer, in a chaotic rescue attempt.

Ankie Spitzer, the families’ representative in meetings with Mr Herzog, said the families considered the compensation offered by Germany “a joke” and that all but one of the members planned to hold the ceremony where the payment would be announced. boycott.

The German government said in an internal memo from DailyExpertNews that the families have received a total of €4.6 million or about $4.8 million from various German agencies so far. In a statement Wednesday, the German Interior Ministry said “confidential talks are underway with representatives of the victims’ families”, but did not name the boycott.

“We also expect President Herzog to immediately announce that he is not coming,” said Ms. Spitzer, the widow of Andrei Spitzer, who was the coach of the Israeli fencing team. “If the families don’t travel, then he shouldn’t travel either, because if he is there, even to lay a wreath, it will legitimize this cruel German behavior.”

Mr Herzog and President Frank-Walter Steinmeier of Germany had a series of phone calls with the families and the German Interior Ministry, which was responsible for coming up with the compensation offer, in a failed attempt to resolve the dispute, according to the families. and their lawyers, an account supported by Israeli and German officials.

Germany is offering a total of 5.4 million euros in additional compensation to 23 remaining family members, according to the German government memo. But lawyers for the families say they search about 20 times more than that.

“Germany’s degree of state responsibility, as we know it today, is much more extensive compared to the facts known in 1972-2020,” said Alexander Knoops, a lawyer for the families. “Sufficient evidence has recently been found to show that the government has not only failed to protect the athletes, but has also helped to cover up its failures.”

The dispute over compensation is a rare conflict between Germany and Israel. Germany has worked hard to be transparent in its atonement for its Nazi past and to have a special relationship with Israel. Israel, for example, is traditionally one of the first foreign trips of new German presidents.

The decision of the family members to boycott the event casts doubt on the participation in the ceremony of the entire Israeli delegation of about 200 people, including members of the Israeli Olympic Committee and Olympic medal-winning athletes, who have said they will not go to Munich. without the families.

Herzog has not yet made a decision on the matter and is continuing his efforts, together with the President of Germany, to resolve the matter, Israeli officials said. A spokesman for the Israeli president declined to comment on the matter.

Ms Spitzer, the family’s representative, also said Israel has not helped her or others in the past decade.

“The ties with Germany are very important and probably surpass everything else,” she said. But, she added, it was time for Israel to “say publicly what everyone else is saying quietly for fear of offending the Germans — it’s time to finally compensate the victims’ families for the horrific failures that led to the death of Andrei and the other 10 athletes, and for all the lies and cover-ups over the past 50 years.”

Israel’s Prime Minister at the time of the attack, Golda Meir, refused to negotiate with the militants but asked for a special commando unit to be sent to free the athletes, but Germany refused, a message received by German officials confirmed in a 2012 documentary. Israel demanded that the Games be halted, but this request was also rejected.

The head of Israel’s intelligence service, Mossad, said he was only allowed to observe the rescue operation and that all his proposals had been rejected by the Germans.

“They have made no minimal effort to save lives, they have not taken minimal risk to try and save people, neither theirs nor ours,” Mossad head Zvi Zamir told the ministers of the government when he returned to Israel. a transcript of the meeting obtained by DailyExpertNews.

The families of the victims have long accused the German authorities of hiding documents from them and creating bureaucratic problems so that they would not be able to access the archives and receive financial compensation.

Recently declassified documents published in the German media show that German intelligence warned of imminent action against the Olympics, but did nothing.

In mid-August 1972, the German embassy in Beirut sent an urgent telegram to the Foreign Ministry in Bonn to warn it of an attack. The telegram was first published in July by the Süddeutsche Zeitung.

According to an internal German government memorandum obtained by DailyExpertNews, the purpose of the September 5 ceremony was to address the “questions of historical reckoning that remain unresolved.” According to the statement from the Interior Ministry, Germany saw the ceremony as “an opportunity for a clear political analysis of the events of 1972”.

As part of that effort, Germany plans to establish a German-Israeli history commission, with full access to all data, “to scrutinize all available sources” and come up with a “scientific account and assessment of the events”. President Steinmeier also planned to acknowledge Germany’s responsibility for handling the terror attack and announce additional compensation for the victim’s families.

“Through these actions, the Federal Republic of Germany is fulfilling its moral and historical obligation towards the victims and their next of kin,” the memo concludes.