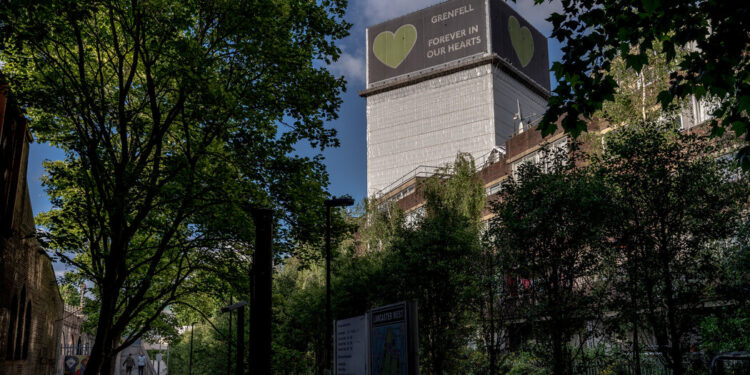 LONDON — The Grenfell Tower grenade, the scene of Britain’s deadliest residential fire since World War II, still looms over the north-west London borough where it burned on June 14, 2017. Now, wrapped in white plastic, it stands as a visible reminder of the 72 lives lost.

Five years later, those who escaped the fire can still hear the sirens, smell the smoke and still see the flames engulfing their homes. The bereaved still mourn the relatives they have lost.

The fire exposed lax building codes that allowed the use of combustible cladding material on the building’s facade, speeding the spread of the flames. The fire also shed light on the neglect in Britain’s social housing system, which included most units in the Grenfell Tower, and drew attention to unsafe building practices at a national level.

But a public inquiry into the causes of the fire is still ongoing and hundreds of lawsuits have been filed against local authorities, material manufacturers – including US company Arconic, which sold the cladding – and those involved in its construction.

For the survivors and the relatives of those who died in the fire, five years has done little to ease the pain.

Mr Gomes and his partner, Andreia Perestrelo, who was seven months pregnant, lived on the 21st floor of Grenfell Tower with their two daughters, ages 9 and 11.

In calls to emergency services, later played into the investigation, Mr. Gomes pleaded for help. By the fifth call, the flames had reached his apartment. He saw the fire consume the cradle prepared for the expected birth of their baby.

They had no choice but to try the stairs. It took them almost 30 minutes to get to ground level.

“I think it was maybe one or two floors, when it kind of dawned on me that there were bodies on the stairwell,” he said.

His family made it out alive, but all were hospitalized with serious injuries. The couple’s unborn son did not survive and was delivered stillborn by Caesarean section while Mrs. Perestrelo was in a coma.

Mr Gomes said the pain of that night had deeply scarred him and his partner. They have both been diagnosed with post-traumatic stress disorder and are struggling with their mental health. They broke up last year.

“We tried to protect each other and in doing that we became our own silos,” he said. “We drifted further and further apart.”

The first four decades of Natasha Elcock’s life were lived in the Lancaster West residential area. For half that time, she lived in Grenfell Tower, the centerpiece of the 24-story estate.

That part of her life ended when she was awakened by sirens five years ago. Firefighters initially told her family to stay in their 11th-floor apartment. But the fire quickly spread and smoke seeped into her home.

For hours, Mrs. Elcock cried frantically for help, using water from the bathtub to extinguish the flames. It would be hours before they were helped.

“There’s been a lot of failure, but there were two firefighters who risked their lives to come get us,” she said, adding, “I owe that forever.”

After the fire, her house had disappeared and the neighborhood looked like “a war zone,” Ms Elcock said she had to fend for herself, without much help from authorities. Many residents in the public inquiry voiced similar complaints about the lack or quality of temporary housing and bureaucratic delays.

Survivors organized themselves, first to account for the missing and then to seek answers to how the disaster had occurred. That evolved into Grenfell United, which Ms. Elcock now chairs, an organization of survivors and bereaved families who have fought for accountability, justice and change for the past five years.

There is still so much unsolved, Ms Elcock said, pointing to the ongoing investigation that will last until September and awaiting possible criminal charges.

“We’re a long way from where we need to be,” she said.

Even before the fire, Edward Daffern was an activist.

“It was an entire community that was unjust and discriminated against,” said Daffern, who has lived in Grenfell for 17 years. He said the building and the wider neighborhood, with its largely working-class makeup and sizable immigrant community, had been neglected by local authorities.

He started the Grenfell Action Group with another resident and wrote a blog in which he outlined unsafe conditions, warned of a potential catastrophe, mentioned a lack of sprinklers and working fire alarms, and the building’s single, narrow staircase.

Then their worst fears became reality. mr. Daffern recalls looking up at the tower after narrowly escaping the fire and seeing charred pieces of the building falling down.

“It was so hard to watch,” he said. But just as difficult were the days of uncertainty that followed, when local authorities provided few resources to the homeless.

“Sometimes when I think about it, it’s not right that this has to happen.”

With Grenfell United, he spent many years pushing for broader social housing reform in England and better tenant protection.

More needs to be done to hold the companies involved in the building’s construction, local authorities and management accountable, he said.

“We have to make big strides, and they just haven’t happened,” added Daffern.

Bellal El Guenuni and his wife raised three children and had another in 2017.

As busy parents, it was easy to see past the problems at Grenfell Tower, such as the broken elevators, delayed repairs and the disarray caused by a four-year renovation that included the cladding.

“In social housing I think there is an element of ‘Be thankful for what you have’,” said Mr El Guenuni. “You get the feeling, to a certain extent, that you can’t rock the boat.”

Like other survivors, Mr. El Guenuni plunged into activism after the fire.

“The only way change will come is if you stand up and confront it,” he said.

On the night of the fire, Mr. El Guenuni was not at home and received a panicked call from his pregnant wife who was in their apartment on the 18th floor with their three children.

“I literally banged my head against a wall,” he said as the situation became dire.

The family eventually ran for the stairs and narrowly escaped with their lives. Mr El Guenuni said two of his children and his wife had been hospitalized for weeks, and he spent his time rushing between different hospitals to be close to them.

But he faced the added burden of not having a home to return to and said he received little support from local authorities.

“You were let down by the people who had a duty of care for you, who should have done something,” he said.

But he said community members stepped in to fill that void. “I wouldn’t underestimate the power of a community or the power of people coming together.”

Karim Mussilhy recalls how his uncle, Hesham Rahman, was a “big part” of every stage of his life. “And then, you know, Grenfell took him from us.”

The morning after the fire started, Mr. Mussilhy was taking a shower at home before work a few miles away when he heard his wife screaming. She ran in and handed him her phone.

“And it was Grenfell, just all in flames,” he said. He called his uncle, who lived on the top floor of the tower, and the phone rang and rang.

Mr. Mussilhy ran to the tower.

“It was just chaos everywhere,” he said. “I remember one of the first things I saw was a group of firefighters crying.”

Without any answer to Mr. Rahman’s fate, the family plastered the neighborhoods with posters of him. It took days for police to contact them to get details about his uncle, he said. Months passed with few words.

Finally, the body of Mr. Rahman returned to his family in September after being identified and a series of other delays.

Mr Mussilhy said he was shown a CCTV footage of his uncle’s building entering his apartment the night of the fire, carrying a shopping bag containing an aubergine with which he was likely planning to complete his Ramadan fast. break. Moussaka was one of his favorite dishes, he said.

“It was actually quite sad to see that,” he said. “That was all we got.”