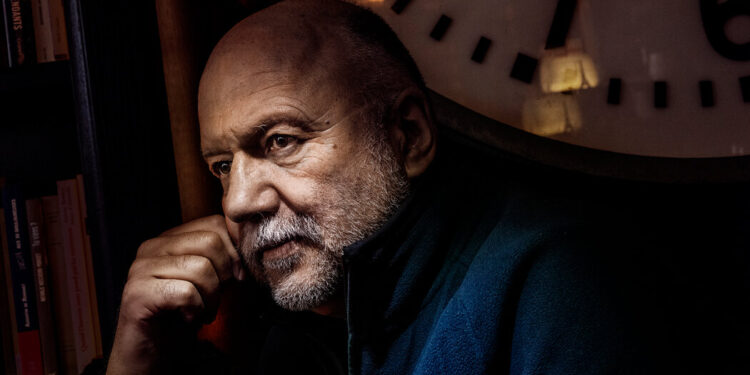 Kurkov continued to write his article on the plane and by the time we reached Charles de Gaulle it was finished. He was staying in a hotel near the Luxembourg Gardens. When we got there, in the pouring rain, a little after 11:30 a.m., someone from his French publisher, Liana Levi, was waiting at the front desk to escort him to their nearby offices, where the afternoon’s series of interviews was scheduled. By the time I caught up with him again, for an event at the Ukrainian Cultural Center that night, he’d been awake, I calculated, for the past 48 hours, except for seven. You wouldn’t have known. Standing before a packed audience on the second floor, Kurkov made his plea for the people of Ukraine in French with his usual dynamism. Sorrowful sighs and bitter laughter rippled through the room, the walls of which were decorated with scathing anti-war cartoons by French and Ukrainian artists: Putin at the head of an empty conference table under a slogan inviting him to eat feces; an insecure-looking Putin exposing his genitals, accompanied by the words Moi j’ai des couilles (“I have balls”).

Kurkov was there to discuss the war, but because “Grey Bees” had recently appeared in French, the event also became a book review. Four years ago, when the novel first appeared in Ukraine, it was extremely timely; today it is already historic. The story is set in 2017, three years after Putin sent his troops to the Donbas region, where, unlike the central and western parts of the country, Soviet nostalgia is rampant. The Russian calculation was simple, Kurkov says in a foreword to the book’s English translation: “A Ukraine with a permanent war in its eastern region will never be fully welcomed by Europe or the rest of the world.”

Sergeyich, the protagonist of the novel, is literally in the middle of this lingering conflict. The 280-mile front between Ukrainian and pro-Russian forces is separated by a narrow strip of territory known as the “grey zone.” Most of the inhabitants fled at the beginning of the war. Sergeyich, a retired mine safety inspector, has stayed and is now one of only two remaining residents of the village of Little Starhorodivka. “If every last person left, no one would return,” he reasons. As shells whistle above us and provisions run out, Sergeyich seems to be thinking about only one thing: beekeeping. This was once a hobby, but has now grown into something more. In the absence of family and community, his hives give him a sense of purpose. “He had to maintain his health, not only for himself, but also for the bees,” Kurkov writes. “If anything should happen to him, they would perish in all their multitudes – and he simply could not allow himself to become, either by his own will or otherwise, the destroyer of hundreds of thousands of bee souls.”

Sergeyich doesn’t just care about his creatures; he admires them. The order and coherence of the beehive remind him of Soviet times. For all its hardships, life made sense back then. Today there is only chaos and confusion. Sergeyich, a Russian speaker, resents the fact that his passport is written in Ukrainian (as “Serhiy Serhiyovych”) and dismisses the Revolution of Dignity as “all that nonsense in Kiev.” He also admires Yanukovych, the deposed president (who enriched himself and his family at considerable public expense), as someone you could “understand and trust, like an old abacus.” In other words, Sergeyich seems to be a well-known contemporary figure, the kind of jaundiced middle-aged man who whines about free speech when told he can’t call women “broad” anymore. Under other circumstances, he might have been a Trump voter or a Brexiteer. As it is, he seems a likely candidate for reinstatement in the Russian hive.

Kurkov, however, wants to tell a different story. Sergeyich finally decides it’s time to leave the village when he notices that his bees are producing bitter honey – burnt gunpowder has contaminated the pollen they collect. He stuffs the hives in his worn-out Lada and drives first to the neighboring region of Zaporizhzhya and then to Crimea, where he plans to visit an old friend, Akhtem, whom he met at a beekeeping convention years earlier. Akhtem is a Crimean Tatar member of the indigenous Muslim minority that has persecuted Russia since it annexed the peninsula in 2014. When Sergeyich arrives at his house, he learns from Akhtem’s wife that he has been taken into custody: she has not heard from him for almost two years. Sergeyich is temperamentally apolitical, but while asking the authorities for information about his friend, he slowly wakes up to the horrors of Russian state violence. Kurkov follows the development of his rustic hero with great subtlety and care, resisting the urge to scold or edit. It’s hard to imagine an American novelist from the cosmopolitan centers who did the same with a rusty MAGA follower.

In the question-and-answer session that followed his speech, a young compatriot asked Kurkov if he had plans to write a novel in Ukrainian. He didn’t, he said, politely but firmly. Later that evening, at the obligatory four-hour dinner, where Kurkov showed no sign of slackening, he told me how much the question irritated him. The subtext was clear: if you didn’t use the Ukrainian language, you weren’t really Ukrainian. Plus, it seemed to lack the spirit of “Grey Bees” itself. While the book reveals a country divided by language, region and ethnicity, it also suggests that these divisions are less entrenched than they appear. Despite his Russian roots, Sergeyich befriends a Ukrainian soldier who regularly visits his home. In Zaporizhzhia, a grenade-shocked veteran of the Donbas War takes an ax to his Lada, thinking he is a separatist, and yet this doesn’t stop Sergeyich from entering into a romantic relationship with one of the locals. As an Orthodox Christian, he must overcome an instinctive wariness of the observant Muslim family of Akhtem, though he eventually becomes devoted to them.