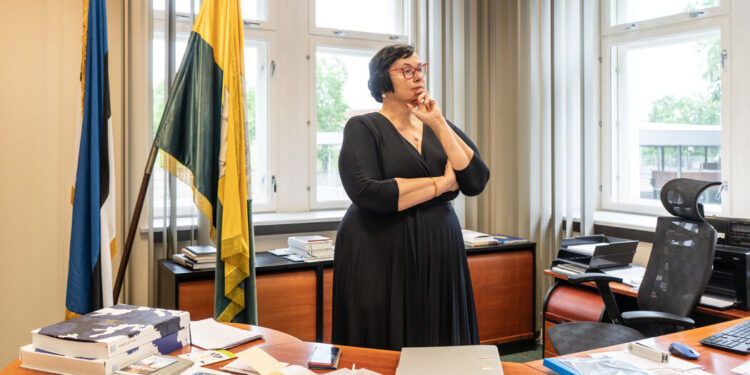 NARVA, Estonia — Like many of the ethnic Russians living along Estonia’s eastern border with Russia, Stansislava Larchenko couldn’t believe that President Vladimir V. Putin had committed a massacre in Ukraine.

Ms Larchenko, 51, became angry with her son when he said in February, after Mr Putin invaded Ukraine, that Russian soldiers were killing civilians. She insisted the massacre was the work of Ukrainians dressed in Russian uniforms, a trope of state television broadcast from Russia that she watched.

“For me, Russia has always been a liberator, a country that has been attacked but never attacked others,” said Ms Larchenko in the Estonian border town of Narva, NATO’s easternmost outpost and the most ethnically Russian city in the European Union.

But after four months of war, Ms Larchenko said she had “taken off my rose-colored glasses” — and stopped arguing with her son, Denis, 29, after taking his advice to stop watching Russian state television.

“Psychologically,” she said, “I passed over to the other side.”

In a city where almost everyone speaks Russian instead of Estonian and where social pressure is exerted to stick with their ethnic group, Ms Larchenko is unusual in her willingness to openly state that she no longer sees Russia as a force for good, but as an aggressor.

The fact that so few Russians in Estonia’s free and democratic society are willing to do this may indicate how difficult it will be for people to change their minds in Russia, where open criticism of the war is a criminal offence.

Beneath the surface, however, the mood in Narva is changing, especially among younger ethnic Russians. For some, this shift carries a troubling message to the Kremlin: Private doubts are eroding public support for what Mr Putin calls his “special military operation.”

Others only see loyalty in the offing: Russians, said Raivo Raala, a dyspeptic ethnic Estonian retiree in Narva, “are not people, but slaves.”

The son of Ms Larchenko, a member of the city council, said that most ethnic Russians in Narva “now know that Russia was wrong to attack Ukraine”, but still struggled to reconcile this with a foundation of their identity – deep pride in Russia’s role in the defeat of Nazi Germany.

Sergey Tsvetkov, a Russian Kremlin critic who fled Saint Petersburg to Narva in 2014 and is now helping refugees from Ukraine, said he was disappointed that so few ethnic Russians in Estonia had spoken out against the war.

But, he added, “people are starting to think a bit more now – most have not changed their mind, but they have doubts” about Russia’s rationale for invading Ukraine, mainly its claim that Ukraine has been overrun by fascists. and must be addressed. “liberated.”

Mr Putin last month helped stir those doubts by reframing the invasion as part of a mission to “return and fortify” territory that he said had belonged to Russia “from time immemorial”. “This,” said Mr. Putin, “applies to Narva,” conquered by Peter the Great in 1704.

Narva’s mayor, Katri Raik, an ethnic Estonian historian, mocked Mr Putin’s lecture that history was not true. No one in Narva, including native Russian, more than 95 percent of the city’s population, she said, wants to be part of Russia.

About 36 percent of the city’s 60,000 residents have Russian rather than Estonian passports, but, the mayor said, “no one leaves to live in Russia,” where salaries are much lower, corruption is rampant and health care is rampant. and other services are much poorer.

“Everyone here knows what life is like there,” Mrs. Raik said.

However, despite this knowledge, many ethnic Russians in Estonia were favorable to Putin when the war started.

A March poll by Globsec, a Slovak research group, found that 22 percent of Estonians — a figure roughly equivalent to the ethnic Russian population — had a positive view of Mr Putin, down from 30 percent last year.

The mayor said he thinks Mr Putin’s support has waned since then, mainly because people can no longer easily watch Russian state television following an Estonian ban on cable services.

Even ethnic Russian politicians tilted to Moscow admitted that no one wanted Russia’s despotic system installed in Narva.

“We live in a democratic society – those who don’t want this have already left,” said Tatyana Stolfart, a member of the city council of the Center Party, a formerly pro-Russian political force. Shortly after the Russian invasion, the party abruptly canceled its cooperation agreement with Mr Putin’s United Russia party.

In an interview, Ms Stolfart was initially cautious about saying who was to blame for the murder in Ukraine, but then she acknowledged, “Yes, Russia is the aggressor.”

The tarnishing of Russia’s image has helped to rally support even among some ethnic Russians for the Estonian Defense League, a voluntary militia under the Ministry of Defence. Roger Vinni, an ethnic Estonian organizer of the competition in Narva, said half of the city’s 300 members were ethnic Russians. “They are Estonian patriots, just like us,” said Mr Vinni.

Many older Russians, he added, still harbor nostalgia for the Soviet Union, but their children and grandchildren are more integrated, speak Estonian and “see themselves as part of Estonia and Europe, not the Soviet Union or Russia.”

Younger Russians in Narva have also made an effort to help Ukrainians, many from Mariupol and other occupied cities, who had fled to Estonia to escape Russian forces.

Kristina Korneitsuk, a 23-year-old volunteer who washes bedding for a refugee shelter, said that while she blamed Russia and Ukraine for the conflict, Putin “may have gone a little crazy”.

His comments about Narva belonging to Russia, she added, should be taken seriously. “If he can attack Ukraine, there is reason to think that the next step could be the Baltic states,” she said.

While Russia has not issued any specific threats against Estonia, Moscow on Monday threatened Lithuania, another Baltic state, with retaliation if it did not lift its ban on the transport of some goods to Kaliningrad, a Russian enclave between Lithuania and Poland.

Some elderly ethnic Russians, despite their strong emotional ties to Russia, express dismay at the aggression and paranoia that grips Russian society. Gennady Suslov, a mechanic, complained that when he cycled across the bridge connecting Narva to the neighboring dilapidated Russian city of Ivangorod on his Ukrainian bicycle, he had to put tape over the “Ukraine” brand name on the crossbar to avoid the risk of detention.

Russia, he said, “has gone a little crazy.”

That perception has fueled a long, often faltering campaign by the Estonian state to get more ethnic Russians to embrace the country they live in.

“With Putin’s help, the Estonization process has been catalyzed,” said Artemy Troitsky, an accomplished Russian journalist and Putin critic who moved to Estonia in 2014. Mr Putin, he added, has made his country “totally uncool” and so toxic that hardly anyone is willing to publicly defend his actions.

Estonia has also banned four Russian cable television channels, which were previously the main source of news for many ethnic Russians, who make up nearly a quarter of Estonia’s population.

With the purchase of a small antenna, it is still possible to watch Russian television in Narva, but Moscow has nevertheless lost its propaganda stranglehold. Ms Larchenko, the mother who shook off her illusions about Russia, said she hadn’t watched Russian television for three months and now gets all her news from the Internet, including from critical sites about the Kremlin.

Alyona Boyarchuk, a Ukrainian single mother who took refuge in Narva shortly after Russia invaded her country, said she was met with hostility from ethnic Russians upon her arrival. She is now largely treated with respect and is questioned whether what Moscow is saying about the war is true.

To counter Russian propaganda, the Estonian state broadcaster has its own Russian-language service, ETV+, which reflects the government’s view that Ukraine is the victim of an illegal and brutal attack by the Kremlin.

Sergei Stepanov, a news editor for ETV+ in Narva, said the “Soviet mentality” of an older generation pining for the days when Estonia was part of the Soviet Union still made it difficult for many to view Russia as an aggressor. to see.

His mother-in-law, he added, considered him and his wife “fascists” because they support Ukraine. “There is a mental war going on between the generations,” he said.