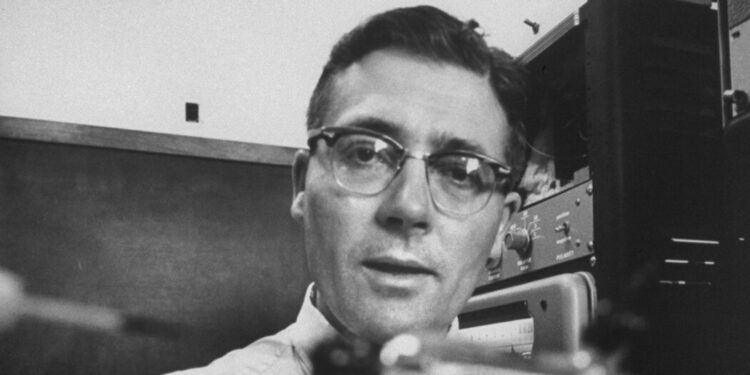 James Lovelock, the maverick British ecologist whose work was essential to the current understanding of man-made pollutants and their effect on the climate and who captured the imagination of the scientific world with his Gaia theory, which sees the Earth as portraying a living being, died on Tuesday, his 103rd birthday, at his home in Dorset, southwest England.

His family confirmed the death in a statement on Twitter, saying that up to six months ago, he was “still able to walk along the coast near his Dorset home and participate in interviews, but his health deteriorated after a serious fall earlier this year.”

dr. Lovelock’s broad knowledge stretched from astronomy to zoology. In his later years, he became an eminent proponent of nuclear power as a means of solving global climate change and a pessimist about humanity’s ability to survive a rapidly warming planet.

But his worldwide fame rested on three major contributions that he developed during a particularly bountiful decade of scientific research and curiosity, stretching from the late 1950s to the latter half of the 1960s.

One of these was his invention of the Electron Capture Detector, an inexpensive, portable, extremely sensitive device used to measure the spread of toxic man-made compounds in the environment. The device formed the scientific basis of Rachel Carson’s 1962 book Silent Spring, a catalyst of the environmental movement.

The detector also helped lay the groundwork for regulations in the United States and in other countries that banned harmful chemicals such as DDT and PCBs, and greatly reduced the use of hundreds of other compounds and the public’s exposure to them.

Later, his finding that chlorofluorocarbons — the compounds that power aerosol cans and used to cool refrigerators and air conditioners — were present in the atmosphere in measurable concentrations led to the discovery of the ozone hole.

But he is perhaps best known for his Gaia theory – that the Earth functioned, as he put it, as a “living organism” capable of “regulating its temperature and chemistry in a comfortable steady state.”

The seed of the idea was planted in 1965, when Dr. Lovelock was a member of the space exploration team recruited by the National Aeronautics and Space Administration and stationed at NASA’s Jet Propulsion Laboratory in Pasadena, California.

An expert on the chemical composition of Earth’s and Mars’ atmospheres, he wondered why Earth’s atmosphere was so stable. He theorized that something must regulate heat, oxygen, nitrogen and other components.

“Life on the surface has to do the regulation,” wrote Dr. Lovelock later.

He presented the theory in 1967 at a meeting of the American Astronautical Society in Lansing, Michigan, and in 1968 at a scientific meeting at Princeton University.

That summer, the writer William Golding, a friend, suggested the name Gaia, after the Greek goddess of the earth. Mr Golding, the author of “Lord of the Flies” and other books, lived near Mr Lovelock in Wiltshire, South West England.

A few scientists hailed the hypothesis as a thoughtful way to explain how living systems affected the planet. However, many others called it New Age pablum.

Without the contributions of Lynn Margulis, an eminent American microbiologist, the hypothesis may never have gained credibility and reached the scientific mainstream. In the early 1970s and in the decades since, she collaborated with Dr. Lovelock to specific research to support the idea.

Since then, a number of scientific meetings on the Gaia theory have been held, including one at George Mason University in 2006, and hundreds of papers have been published on aspects of it. Lovelock’s theory of a self-regulating Earth is considered essential to understanding the causes and effects of global warming.

His Electron Capture Detector was created in 1957, when he was a staff scientist at the National Institute for Medical Research in Mill Hill, north London. It was announced in 1958 in the Journal of Chromotography.

In combination with a gas chromatograph, which separates chemical mixtures, the detector was able to measure minute concentrations of chlorine-based compounds in the air. It ushered in a new era of scientific understanding of the distribution of the compounds and helped scientists identify the presence of minuscule levels of toxic chemicals in soil, food, water, human and animal tissue and the atmosphere.

In 1969, Dr. Lovelock with his electron capture device that man-made pollutants were the cause of smog. He also found that the family of persistent man-made compounds known as chlorofluorocarbons was measurably present even in the clean air over the Atlantic Ocean. He confirmed the worldwide spread of CFCs during an expedition to Antarctica in the early 1970s and published an article about his findings in the journal Nature in 1973.

dr. Lovelock prided himself on his independence from universities, governments, and corporations, although he made a living from all of these. He loved to be candid, blunt, deliberately provocative and careless. And perhaps not coincidentally, he was less successful in using his work for financial gain and prestige within the scientific community. The electron capture detector, arguably one of the most important analytical tools developed in the 20th century, was redesigned and marketed by Hewlett-Packard without any royalty or license agreement with Dr. lovelock.

And although Dr. Lovelock identified the presence of CFCs in the atmosphere, he also reasoned that at parts-per-billion concentrations, they posed “no imaginable danger” to the planet. He later called that conclusion “a needless blunder.”

A year after his Nature article, Mario Molina of the Massachusetts Institute of Technology and F. Sherwood Rowland of the University of California at Irvine published an article in the same journal describing how sensitive the Earth’s ozone layer is to CFCs. In 1995, she and Dr. Paul Crutzen of the Max Planck Institute in Germany won the Nobel Prize in Chemistry for their work warning the world about the thinning ozone layer.

“He had a great mind and a will to be independent,” said Bill McKibben, the author of “The End of Nature” and a scholar-in-residence at Middlebury College in Vermont. “He credibly played an important role in literally saving the Earth by helping to find out that the ozone layer was disappearing. The Gaia Theory is his most interesting contribution. When global warming became our biggest problem, Over time, the Gaia theory has helped us understand that small changes can shift a system as large as Earth’s atmosphere.”

James Ephraim Lovelock was born on July 26, 1919 at his maternal grandmother’s home in Letchworth Garden City, about 30 miles north of London. His parents, Tom and Nell Lovelock, were shopkeepers in Brixton Hill, South London. James lived with grandparents in his earliest years, but joined his parents in Brixton Hill after his grandfather died in 1925.

In London he was an underperforming student but an avid reader of Jules Verne and of scientific and historical texts borrowed from the local library.

dr. Lovelock often attributed his determined independence to his mother, an amateur actress, secretary, and entrepreneur whom he considered an early feminist. His interest in the natural world came from his father, an outdoorsman who took his son on long walks in the countryside and taught him the common names of plants, animals and insects.

In 1939 James enrolled at the University of Manchester, was granted conscientious objector status, which allowed him to avoid military service at the start of World War II, and graduated in 1941. He was soon hired as a junior scientist in the Medical Research Council, a government agency, where he specialized in hygiene and transmission of infectious agents.

One of the young people who also joined the research institute was Helen Hyslop, receptionist. The two were married on December 23, 1942, and the first of their four children, Christine, was born in 1944. Later came another girl, Jane, and two boys, Andrew and John. In 1949, Dr. Lovelock a Ph.D. in medicine from the London University School of Hygiene and Tropical Medicine.

Helen Lovelock, who had multiple sclerosis, died in 1989. He later married Sandra Orchard, an American. They met when she asked him to speak at a conference, he told British magazine The New Statesman in 2019.

To the survivors of Dr. Lovelock include his wife; his daughters, Christine Lovelock and Jane Flynn; his sons, Andrew and John; and grandchildren.

dr. Lovelock is the author of, among others, “Gaia: A New Look at Life on Earth” (1979). Another, “The Vanishing Face of Gaia: A Final Warning” (2009), argued that Earth was rushing to a permanent hot state faster than scientists think. His autobiography, “Home to Gaia: The Life of an Independent Scientist”, was published in 2000.

Among his many awards were two of the most prestigious in the environmental community: the Amsterdam Prize for the Environment, awarded by the Royal Netherlands Academy of Arts and Sciences, and the Blue Planet Prize, awarded in 1997 and widely regarded as the environmental equivalent of a Nobel Prize. .

dr. Lovelock caused a sensation in 2004 when he stated that nuclear power is the only realistic alternative to fossil fuels that has the capacity to meet humanity’s large-scale energy needs while reducing greenhouse gas emissions.

In his final years, he expressed a pessimistic view of global climate change and man’s ability to avoid an environmental disaster that would kill billions of people.

“The reason is that we wouldn’t find enough food unless we synthesized it,” he told New Scientist magazine in 2009. “As a result, the slaughter in this century will be huge, up to 90 percent. The number of people left at the end of the century will probably be a billion or less. It has happened before. Between the ice ages there were bottlenecks when there were still only 2,000 people were left. It’s happening again.”