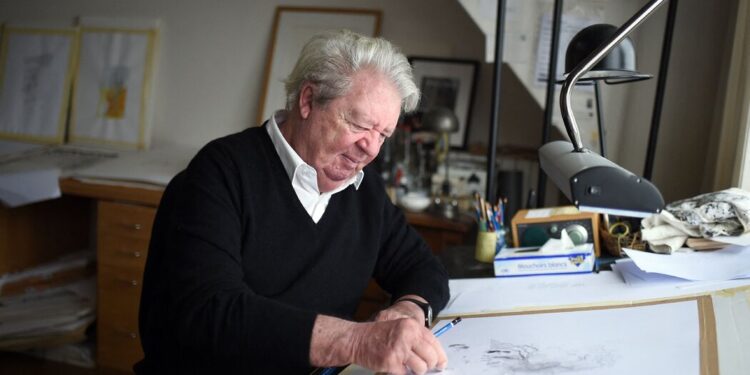 Jean-Jacques Sempé, the French cartoonist known in America for his children’s book illustrations and covers for The New Yorker, which at poignant moments portrayed small, friendly people with big noses, often overshadowed by monumental backdrops, died Thursday. He was 89.

His wife, Martine Gossieaux Sempé, announced the death to Agence France-Presse. His biographer, Marc Lecarpentier, said Sempé — as he signed his work and was widely known — died in a holiday home, but he did not specify where that was, AFP reported. Sempé had a house and studio in Paris.

In a nighttime panorama of sleeping city skyscrapers, Sempé lit up a ballerina in a window. On the towering span of the Brooklyn Bridge, a lone Sempé cyclist churned bravely. And in front of a big blackboard full of Einstein calculations, his scruffy little genius softly boiled an egg.

It was timeless storytelling without words, a kind of pictorial haiku, the whimsical whims of an illustrator who never went to art school, but who spent half a century at the drawing board evading the vile realities of life for a mythical world of naughty schoolboys, daydreamers. , curious neighbors, vacationers and swooning lovers.

Loved in France, popular around the world and one of America’s favorite cartoonists, Sempé drew more than 100 covers for The New Yorker in an association that began in 1978. His cartoons also appeared in other magazines and newspapers and were collected in dozens of anthologies.

And in a collaboration with the writer René Goscinny, started in 1959, he illustrated a series of children’s books based on the escapades of Le Petit Nicolas (Little Nicholas), a nostalgic version of French post-war childhood. Their first installment was an overnight success, followed by four sequels and over time the series became an international classic, reprinted in France, the United States and many other countries.

Sempé, who also composed graphic children’s novels, eventually produced or worked on more than 30 books, which were translated into 37 languages ​​and sold millions of copies worldwide.

Blushing and white-haired, he lived and worked in Saint-Germain-des-Prés in Paris, but he often traveled to New York to consult with editors and publishers and get ideas for his arachnid pen-and-ink drawings, which liberally use vibrant watercolors or white space. His long and wide perspectives include waves of sea and sky, large forests or monumental rooms that dwarf the small dramas he focused on.

His subjects were office workers, housewives, delicate little girls, frustrated commuters, pretentious intellectuals, musicians, roller skaters and cyclists, whom he adored because he was one of them. His men were probably fat and bald, with neat mustaches and sometimes berets; the women were often double-chinned matrons in polka-dot dresses.

“He’s a national institution that has gained near-universal appeal by remaining quintessentially French,” Charles McGrath wrote in DailyExpertNews in 2006. “His precise, elegant drawings are often set in a Paris that even Parisians dream of: a city of mansard roofs, high windows and wrought iron balconies, where all the cars still resemble Deux Chevaux or Citroëns from the 1950s.”

Each New Yorker cover was like a scene from a bigger story, and Sempé’s massive backdrops heightened the effect. On October 24, 2005, it was a little dancer in a tutu, waiting to be called, sitting on a bench under the statue of a great ballerina in a gigantic stage space. On November 14, 2011, it was a little boy with a violin case, looking at a studio with towering bass, huge drums and a menacing maestro pounding a grand piano.

On the softer side were the Sempé cats. One was on a fluffy bedspread by a window overlooking Manhattan; another sat on a banister, the boss of his empty household. A multi-panel Sempé cartoon showed a single autumn leaf coming down from a tree and a hand throwing it to another yard.

He offered a touch of modernity – a cell phone or a computer – but bicycles and roller skates more often kept his drawings stubborn in a retro era, and the worlds of classical music and the performing arts lent timelessness to his work. Any concertgoer could recognize the symptoms.

Sempé performed the usual use of the arm wave of orchestra performers to take credit for others on stage as an appreciative audience roars, portraying an entire orchestra in a chain of arms-waves that began with the conductor and pianist, writhing back by the rows of strings and horns, finally ending far in the back, where a little percussionist beamed and bowed.

With the caption “C’est La Vie!” he drew four couples in separate boats on a fishing holiday – the men in the bow facing the cardinal points with their lines out; the women gossiped in the stern, which were tied together.

To illustrate the pride of the French housewife committed to cleanliness, Sempé drew madame polishing the tracks of a railroad that ran just outside her front door.

Out of sheer joy, he drew a girl skipping rope on the roof of a tenement house, with the big city rising behind her like an audience of the future.

And for sheer luck living, there was Sempé’s man in the dunes, alone on the beach at the end of a perfect September day, tipping his hat to the incoming Atlantic Ocean.

“Vulnerability is la condition humaine, and my vulnerability is reflected in that of the people I draw,” Sempé told The Times in 1980. “You have to look into the people you draw to be a good artist — or a good humorist.”

Jean-Jacques Sempé was born on 17 August 1932 in Pessac, a suburb of Bordeaux, to Ulysse Sempé and Juliette Marsan. As a boy, he loved to scribble, but he was an indifferent student and was expelled from school for being undisciplined. He took exams for jobs at the post office, a bank, and a railroad, but all failed. He sold tooth powder door to door and for a time supplied wine.

When he was 17, he desperately lied about his age and joined the French army.

“That was the only place I would get a job and a bed,” he told The Times.

He was caught drawing while on watch and reprimanded, and was sent to the stockade when his age was discovered. Discharged, he moved to Paris, where he won a prize for young artists in 1952. He started selling illustrations to the magazines Paris Match and L’Express and the comic book Le Moustique, in which he drew a schoolboy named Nicolas.

Mr. Goscinny suggested they collaborate on a book, and the result was ‘Le Petit Nicolas’, told from the boy’s point of view. Sequels were produced. An American edition appeared in 1962, and many volumes were published over the following decades.

Sempé was married three times and divorced twice. His first wife was the painter Christina Courtois. He and his second wife, the artist-illustrator Mette Ivers, had a daughter, Inga Sempé, born in 1968. Since 2017, he was married to Martine Gossieaux, a gallery owner who was also his agent.

Complete information on survivors was not immediately available.

The cartoons of Charles Addams, Saul Steinberg and James Thurber inspired Sempé to sign for The New Yorker. Anthologies of his cartoons include “Nothing Is Simple” (1962), “Everything Is Complicated” (1963), “Sunny Spells” (1999) and “Mixed Messages” (2003).

He also wrote graphic novels: “Monsieur Lambert” (1965), about friends in a bistro; “Martin Pebble” (1969), about a boy who blushes; and “The Musicians” (1980), featuring whimsical glimpses of the music world.

Sempé found his métier in the past. “I like to draw street scenes, which means you have to draw cars, but I hate drawing modern cars,” he told British newspaper The Independent in 2006. “They are very fast and very efficient, but they have no charm.

“To me,” he added, “the modern world has no charm. I’m not saying it used to be always better. They weren’t. But to me it looked better, or at least more interesting.”