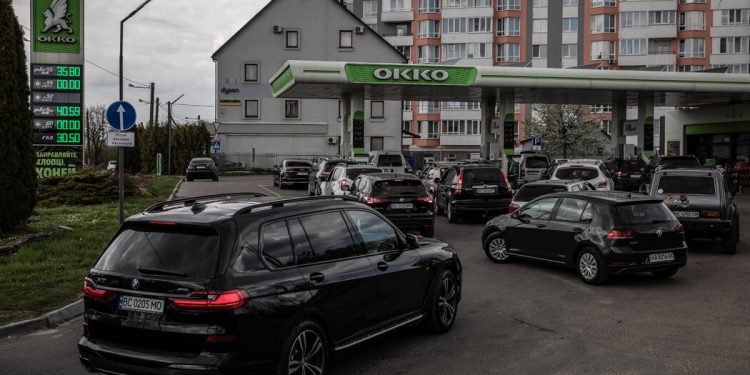 Russia is calling for troops in the Far East to join the battle in Ukraine, Ukraine’s military high command said on Saturday, as Moscow tries to bolster its fighting force amid heavy casualties and signs that its drive to conquer eastern Ukraine has stalled . †

Adding to the sense that both sides appeared to be in a war of attrition, Ukrainians lined up at gas stations across the country on Saturday as the government struggled to cope with a fuel shortage caused by Russian attacks on oil infrastructure.

“In many regions of our country, there are queues and rising prices at gas stations,” Ukraine’s President Volodymyr Zelensky said in his overnight address on Friday. “The occupiers are deliberately destroying the infrastructure for the production, supply and storage of fuel.”

He said a Russian blockade of Ukrainian seaports meant that replacement supplies could not come in by tanker. The war has also paralyzed the grain crop in Ukraine, known as the breadbasket of Europe, disrupted global food supplies and exacerbated a food crisis in East Africa.

While Western allies have poured more heavy weapons into Ukraine, Slovakia and Poland, both NATO countries have reached an agreement that could predict the transfer of MIG-29 fighter jets to Ukraine. Slovakia said Polish F-16 jets would patrol the skies and free a Slovak fleet of Soviet-made MIGs.

After a meeting between the two countries’ defense ministers on Friday, Poland said the air force would begin patrolling over Slovakia as part of their joint effort to help Ukraine.

Slovakia has not explicitly said it would send its MIGs to Ukraine, but it has suggested the possibility of doing so – provided it can find an alternative way to protect its airspace, which the agreement with Poland appears to be achieving.

Poland refused to deliver its own fleet of MIG-29s directly to Ukraine last month, offering instead to fly the planes to a US military base in Germany, where they could then be flown to Ukraine. Washington, concerned about provoking Russia, declined the offer.

Russian Foreign Minister Sergey V. Lavrov claimed that by supplying more powerful weapons to Ukraine, the United States and the European Union were waging a proxy fight against Russia regardless of the cost to civilians’ lives.

The flow of weapons from the West, Mr Lavrov said, had nothing to do with supporting Ukraine’s sovereignty, but rather would enable the United States and the European Union to fight Russia “down to the last Ukrainian” .

Ukraine’s fuel shortages followed Russian attacks this week on Ukraine’s main producer of fuel products and other major refineries. Russia said it had also set up storage facilities for petroleum products used by the Ukrainian military.

A senior Pentagon official said these types of attacks were designed to undermine the Ukrainian military’s ability to “replenish their own supplies and bolster themselves.”

In response, officials in Kiev, Ukraine’s capital, urged residents to use public transportation rather than private vehicles to save fuel. “We must consider the needs of the military and our defenders,” the city council said.

The Kremlin’s deployment of troops from eastern Russia to the combat front in Ukraine suggested Moscow could try to regain momentum in what the Pentagon has described as a “popping” offensive in eastern Ukraine.

The Ukrainian army said the additional Russian troops were sent first to a Russian city near the Ukrainian border and then to the northeastern Ukrainian city of Izium, where the Russians have met fierce resistance. He would not say how many troops are deployed.

Western analysts have said Russia’s offensive in the east has slowed as it struggles to overcome many of the same logistical problems related to shipments of food, fuel, weapons and ammunition that hindered the first phase of its invasion more than two months ago. .

On Saturday, Britain’s Ministry of Defense said Russia was trying to solve problems that had limited its invasion by geographically concentrating combat strength, shortening supply lines and simplifying command and control.

But Russia “still faces significant challenges,” the ministry said in its statement latest intelligence update on the war. “It has been forced to regroup and redeploy exhausted and disparate units from the failed advance in northeastern Ukraine. Many of these units are probably suffering from weakened morale.”

The fighting in eastern Ukraine has taken an increasingly heavy toll on both armies. Russia’s defense ministry said on Saturday its troops had fired at 389 targets across Ukraine, including facilities housing soldiers, killing 120 Ukrainians.

To gauge the rising toll on civilians, Ukrainian authorities said police had received more than 7,000 reports of missing persons since the invasion began on Feb. 24, with half of the cases still unresolved.

Ukrainian officials called the number “unprecedented in modern history,” and they called on allies to send forensic experts and specialists in managing missing persons registers.

In a long-awaited but often frustrated development in Mariupol, the ruined southern Ukrainian port occupied by Russian troops, about 20 women and children were evacuated from the Azovstal steel factory, where the city’s last Ukrainian fighters have been holed up, along with hundreds of increasingly desperate citizens.

The news, coming from Captain Svyatoslav Palamar, the deputy commander of the Azov regiment, came amid United Nations-backed efforts to bring about a ceasefire so the trapped civilians and Ukrainian fighters could escape. escaped the factory.

Captain Palamar said in a video on Telegram that an evacuation column had arrived in the evening to take the civilians to a safe place, adding that he hoped wounded soldiers would also be given safe passage.

He gave no further details, although Russia’s TASS news agency said one of its correspondents on the ground reported that 25 people – including six children – had left the factory. It was not immediately clear whether they were free to seek safety in Ukraine or were being held by Russian forces.

Nearly one million Ukrainians have been transferred from Ukraine to Russia, Mr Lavrov said in an interview published by Chinese state media on Saturday. He described the movements as voluntary “evacuations,” a claim that contradicted witnesses, Ukrainian officials and Western observers who said many Ukrainians were forcibly deported.

Mr. Lavrov’s claim echoed false claims in Russian propaganda that his troops are liberating ethnic Russians and others in Ukraine from what President Vladimir V. Putin of Russia calls the “openly neo-Nazi” Ukrainian government.

Ukraine has argued that Russia is carrying out the forced migration of its citizens, which is a war crime, to be used as leverage for peace talks.

In Mariupol, city officials said Russian troops had taken more than 2,000 items — including icons, medals and works by Russian painters — from the city’s museums to Donetsk, the capital of an eastern region controlled by Moscow-backed separatists.

In the southern Ukrainian city of Melitopol, local officials said a mystery man in a white lab coat had used long tweezers and gloves to extract dozens of gold artifacts more than 2,300 years old from cardboard boxes at a local museum. soldiers stood behind him with rifles and watched eagerly. The items were from the Scythian Empire and date back to the fourth century BC

“The orcs have conquered our Scythian gold,” Melitopol mayor Ivan Fyodorov declared, using a derogatory term many Ukrainians reserve for Russian soldiers. “This is one of the largest and most expensive collections in Ukraine, and today we don’t know where they took it.”

A series of explosions in Russia in recent weeks have also raised concerns about the war breaking out beyond Ukraine’s borders, setting off the first air raid siren on Russian soil since World War II.

The incidents include a Russian fuel depot that burst into flames moments after surveillance video captured bright streaks of missiles fired by low-flying helicopters, and a fire that broke out at a military research institute near Moscow.

Russia has accused Ukraine of carrying out the helicopter strike, while military analysts have suggested Ukrainian sabotage was likely responsible for other fires. Ukraine has responded with deliberate ambiguity.

“We neither confirm nor deny it,” Oleksei Arestovych, an adviser to Mr Zelensky’s chief of staff, said in an interview.

Mr. Arestovych described the policy as a strategic stance, and compared it to Israel’s longstanding policy of ambiguity over nuclear weapons, another topic of extraordinary geopolitical sensitivity.

“After what happened,” he said, “we are not officially saying yes and we are not saying no, just like Israel.”