Little Amal, a refugee doll who traveled through Europe, will visit New York 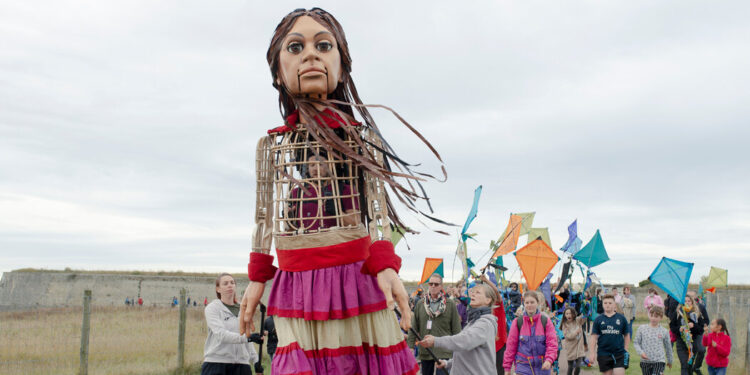 Little Amal, a 40-foot-tall doll depicting a 10-year-old Syrian refugee, has seen about a dozen countries, visited the Royal Opera House in London and other places of interest, and even met the Pope.

But this fall, Amal embarks on an entirely new adventure, crossing the Atlantic for the first time on a trip to New York intended to foster an open embrace of refugees and immigrants.

Amal is scheduled to arrive at John F. Kennedy International Airport on Sept. 14, with plans to travel to all five boroughs, visiting children, artists, politicians and community leaders along the way, according to an announcement Thursday from Walk Productions. who co-produces the visit with St. Ann’s Warehouse.

Her original 5,000-mile journey from Turkey to England last year — including visits to migrant camps — was intended to highlight the plight of millions of Syrian refugees in Europe who have traveled long distances across the continent to flee the country’s civil war. The project would end there, said Artistic Director, Amir Nizar Zuabi, but about two-thirds of the journey, the creative team realized that Amal could have a future outside those particular geopolitical circumstances.

“She became an excuse for communities to come together and be nice to a foreigner,” Zuabi said, “and in doing that, understand something about themselves — understand what there is to celebrate in their communities.”

The towering puppet—operated by three people, including one person on stilts—will visit St. Ann’s, and several other New York cultural institutions will be involved in her journey, including the Brooklyn Academy of Music, Lincoln Center, and the Classical. Theater of Haarlem. The visit, budgeted at over $1 million, will conclude with a trip to the Statue of Liberty in early October.

In 2018, St. Ann’s presented an Off Broadway play, “The Jungle”, which inspired Amal’s character. First performed at the Young Vic Theater before moving to the West End, “The Jungle” is based on what the writers, Joe Murphy and Joe Robertson, noticed when they established an interactive arts center in a migrant camp in Calais, France. The piece returns to St. Ann’s in February.

Susan Feldman, the artistic director of St. Ann’s, said she first saw Amal’s effect on the public last year during a trip to a primary school in a suburb of Paris, where the students started yelling and followed her as soon as they arrived. saw her. hair.

“She became a bit of a Pied Piper,” Feldman said. “It was very magical.”

While Amal’s presence is not overtly political, Feldman said she believed the visit to the United States would send an important message in a country where immigration has become “political football” and migrant children face dangerous living conditions.

For Feldman, Amals’ visits to Europe felt like a parade of innocence and hope. “Having that in a very visible way on the streets could be really nice,” she said.

Designed by the Handspring Puppet Company of South Africa, Amal is quite delicate — her arms and torso are made of bamboo sticks — and has taken a lot of maintenance during her months of travel, Zuabi said. Earlier this year she visited young Ukrainian refugees in Poland.

But New York probably won’t be her last trip: Amal has received requests to visit countries around the world, he said, and plans are in the works for trips elsewhere in the US next year.