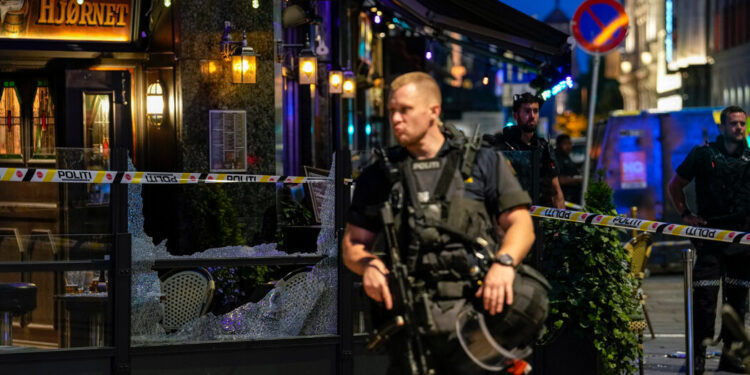 OSLO – Hours after a shooting early Saturday in the Norwegian capital that left two people dead and at least 10 seriously injured, police said they were treating it as a terrorist attack.

The shooting happened near a popular gay club in central Oslo, hours before the city was due to hold its annual Pride parade. The The event organizers later said they had canceled the parade and other events associated with a 10-day Pride festival at the suggestion of the police.

“We will soon be proud and visible again, but for now, for today, we will be holding our Pride events at our home,” Oslo Pride leader Inger Kristin Haugsevje said in a statement.

A male suspect was arrested shortly after the shooting. Oslo police said on Twitter† Christian Hatlo, a police attorney, later on Saturday told reporters that the man in custody was a 42-year-old Norwegian citizen who was originally from Iran and had a criminal record with petty crimes.

The gunman opened fire outside two nightclubs and a restaurant, police said. Mr Hatlo later said authorities had charged him with murder, attempted murder and terrorism. He said they were investigating the shooting as a terrorist attack due to the number of crime scenes and the number of dead and injured.

“He appears to have intended to create fear in the population,” Mr Hatlo said.

Police have reason to believe the attack was a hate crime, as one of the three locations was London Pub, a hub of gay nightlife in Oslo, Hatlo said.

The suspect’s attorney was not immediately available for comment.

In addition to the 10 people who were seriously injured, 11 others suffered minor injuries, some during a panic attack to flee the scene, Mr. hatlo. He added that the police had seized two weapons, including a fully automatic one.

Shootings are extremely rare in Norway. Gun owners must be licensed and take safety classes, and a ban on semi-automatic weapons issued by the Norwegian parliament — a belated response to a 2011 attack by a far-right gunman that killed 77 people — came into effect last year.

Norwegian Prime Minister Jonas Gahr Store described the latest shooting in a statement as a “cruel and deeply shocking attack on innocent people”. The mayor of Oslo, Raymond Johansen, called it “horrific.”

Masud Gharahkhani, the speaker of the Norwegian parliament, also condemned the shooting on his Facebook page.

Mr Gharahkhani, a Norwegian citizen of Iranian descent, said the parliament building had raised the Pride flag for the first time last Saturday to “celebrate diversity and love”.

“I’m proud of that,” he said. “I’ve seen time and time again how hate thrives on social media as we celebrate queer diversity. That is unfortunate and unacceptable.”