Missile attack in Kiev rattles residents after weeks of silence 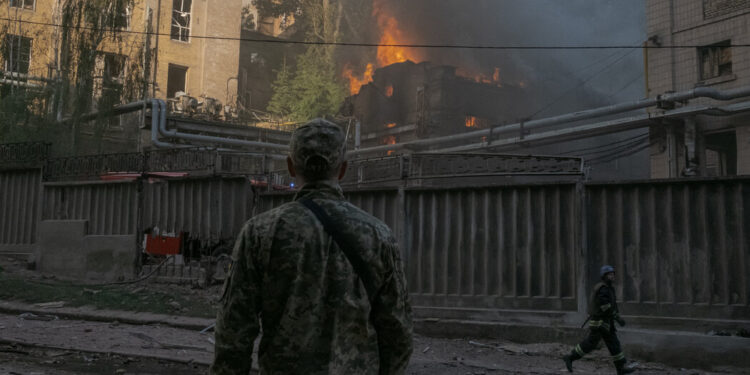 KYIV, Ukraine – Olha and her husband, Roman, stood on a concrete platform, carefully avoiding debris and shards of glass, staring at the smoldering building containing the apartment they moved into a year ago.

A group of firefighters tried to put out a fire that had destroyed part of the structure, while emergency personnel carried a stretcher from the eighth floor down the stairs.

Olha and Roman had chosen Kiev’s Lukianivka neighborhood because it was known as the “quiet center” of the Ukrainian capital, Olha, 32, said.

But on Sunday morning they were awakened by a series of explosions that shook them – and many other residents – out of bed and the relative sense of security that has prevailed in the city since the Russians were evicted from the periphery in early April.

“There is nowhere to feel safe in Ukraine,” said Olha, who was afraid to give her last name.

Her mother, Nataliya, had recently arrived from Kharkiv in northeastern Ukraine, hoping to delay the “constant” explosions that dramatically increased there last week.

At least four Russian missiles hit the neighborhood on Sunday morning, a day after a barrage of rocket attacks on Ukraine. The attacks came as leaders of the Group of 7 of the world’s richest democracies prepared to meet in Germany, and Ukrainian officials said they believed Moscow was trying to send a message to Ukraine and its Western allies.

A 7-year-old girl was rescued from the rubble in Kiev, authorities said. Her father was killed and her mother, a Russian citizen, was injured. The top three floors of the nine-story building in Shevchenkivskyi district have been destroyed, they said.

Vitali Klitschko, the mayor of Kiev, said the attacks were an act of “symbolic aggression” ahead of a NATO summit to be held this week in Madrid.

But for the common people who live in quiet residential areas like Lukianivka, the fear and destruction are not symbolic.

Oleksandra Kvitko, a psychologist who lives nearby, said she was scared when she heard the first explosion. She took her two young children and hid in the bathroom of their apartment.

“We were in the bathroom and another explosion is coming – my walls and doors were shaking,” she said. “I played word games with the kids. I heard the walls shake and realized I can’t do anything, so I kept saying, ‘You start with A. You start with H.’”

When she went back to her room, she screamed into her pillow. “It was really a very nervous situation,” Ms Kvitko said. “But when the mother is calm, the children are calm.”

At the beginning of this month, Russian missiles also hit Kiev, injuring at least one person. Before June, the last rocket attack in Kiev had been on the same apartment complex in late April, hitting a building next to the one where Roman and Olha lived. Both suspected their building was hit this time because it was near a munitions factory.

Ukraine was already on edge after 50 rockets crashed over the country on Saturday. But Sunday’s strikes in Lukianivka, a neighborhood in the heart of Kiev, have sparked new fears in a city that has been coming back to life since April.

More than two million Ukrainians lived in Kiev at the end of May, according to the city government. About half had returned from abroad or from the west of the country. Many restaurants, cafes and shops have reopened and the city’s large Khreshchatyk boulevard is packed on sunny weekends.

The streets were still packed on Sunday, but some Kiev residents expressed their anger on social media — along with intense fear and also defiance.

“Almost every Ukrainian from the war zone knows this lifehack: When you hear the whistle of the missile, you better start counting,” wrote Marina Stepanska, an award-winning film director on Facebook.

“Every second is about a kilometer. When it strikes, you can tell if the explosion is far away or too close. If it’s far away, you’ll still have time for your coffee,’ she continued.

Svitlana Royz, a leading child psychologist, wrote of the need to overcome the pervasive sense of “helplessness, lack of control and utter horror,” saying, “that’s exactly what we can’t give them.”

“We must learn to live in war,” she said. “Because we don’t know exactly how many incidents there will be, after which we have to stabilize.”

But in the Lukianivka apartment complex, Nataliya felt besieged, as if she had lost her house for the second time.

“When will it end?” she asked her daughter.

Nataliya, a doctor who asked not to use her last name, had lived in an apartment in the northern part of the Saltivka region of Kharkiv, which was heavily bombed by Russians.

She fled west, but finally decided to return to Kharkov a few weeks ago after Ukrainian soldiers drove Russian troops out of the city. She decided that she could get used to the sound of regular explosions, but they became “constant” last week, so this time she fled to her daughter’s apartment in Kiev.

Nearby, Dmytro Dzhizhinski was on the phone with his mother, trying to calm her down.

He had woken up Sunday morning to turn off the air conditioning in his apartment. When he turned the knob and looked out the window, his building was hit. He ran down the hall to look for his neighbors and take shelter in case of another strike.

Mr. Dzhizhinski, 26, works as a chief of analysis in a California-based company. Like many in Ukraine’s well-developed IT industry, he fled to the west of the country when the war started before returning to Kiev a few weeks ago. He oversaw the apartment complex, which had been recently built and housed residences, cafes, shops and a playground.

“It would be even more beautiful,” he noted. “They were still finishing everything before the war started.”

He said he planned to stay in the complex for the time being.

“I think I’ll stay; my apartment is fine,’ said Mr. Dzhizhinski. “But we understand it could happen again at any time.”