North of Kiev, the Russians withdrew. But the war never went away. 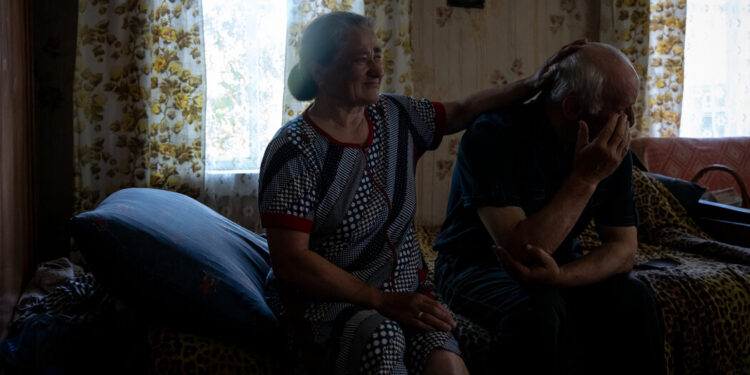 MOSHCHENKA, Ukraine – The tanks are now gone and the thousands of Russian soldiers who poured into northern Ukraine in February have retreated across the border.

But fear still reigns in this quiet village just ten kilometers from Ukraine’s borders with Russia and Belarus.

In the distance, Russian artillery shells shook the neighboring towns every day. Their explosions send a shudder to residents who have endured weeks of Russian occupation and have not forgotten the intimidating presence of the Moscow army that marched by en route to Kiev.

“We are afraid of any noise,” says Kateryna Krasnomirova, who lives temporarily in Moshchenka because her house in Senkivka, even closer to the border, is being shelled daily.

“We live in terror.”

By early April, Ukraine had pushed the invading forces away from Kiev and back across the Russian border, the war’s greatest success and a symbol of the country’s determination. But for the villagers in the region, the retreat did not provide a sense of security – or even a return to normal life.

Apart from the absence of Russian troops, there is little to indicate that this is not a war zone. Ukrainian guards and soldiers regularly patrol the border. There are checkpoints every few miles along all north-south roads. Farmland plots are marked as minefields and mazes of trenches fan out in different directions from each control point. At the entrance to Moshchenka, anti-tank obstacles made of local birch trees and barbed wire guard the checkpoint.

Pensioners from Senkivka, Olena and Mykola Kalivoshko, have also moved to Moshchenka to escape the shelling. They live in the house of a villager who recently passed away.

“We counted 14 explosions yesterday,” said Ms. Kalivoshko, 65. “We want to go home, but we don’t know if we will be able to, so we have already started preparing wood for the winter.”

The couple may very well need that wood.

“Putin has not given up on a plan to destroy Ukraine, and that requires the capture of Kiev,” said Oleksandr Turchynov, who was acting president of Ukraine for several months in 2014 when Russia annexed Crimea and Russian-backed separatists took control of it. most of the Donbas region. “So as long as the war continues, there is a danger of another invasion from the north and a storming of the capital.”

Trying to take Kyiv with an immediate attack from the north proved a misguided goal for Russia and ended in failure. Still, many analysts believe that taking the capital and overthrowing the Ukrainian government remains President Vladimir V. Putin’s ultimate goal, even though he has for the time being limited the scope of Russia’s military ambitions to the Donbas region in the East.

Local officials say they don’t want a repeat of what happened in February, when civilians caught off guard by the invasion had their lives turned upside down, even though the Kremlin had been making its intentions known for months.

“We make sure that a doctor visits all the villages every few weeks because the locals fear that their territory could be cut off at any moment,” said Volodymyr Pinchuk, the deputy mayor of Horodnya, the largest city in the region. . He said residents’ memories of several thousand Russian tanks that thundered through the city for 48 hours in February would not soon be forgotten.

There are more than just psychological factors at play. In this war of attrition, Moscow’s strategy is to force the Ukrainians to defend as much of their exposed borders as possible, even if there is no fighting.

The country must also defend its 600-mile border with Belarus, a Russian ally. Joint Russian-Belarusian military exercises in January and February gave Moscow a pretext to send equipment and soldiers to the border, from which tens of thousands of Russian soldiers launched their attempt to take Kiev.

“The Russians are trying to pin as many Ukrainian troops as possible in other places by posing latent threats to them,” said Gustav Gressel, an analyst at the European Council on Foreign Relations.

“That’s why Belarus is conducting military exercises on June 22, that’s why the Russians use artillery to shell Chernihiv, and that’s why soldiers were mobilized in Transnistria: to keep the Ukrainian troops scattered,” said Mr Gressel.

Russia is trying to keep an eye on the Ukrainians in all those regions. Border guards have detected Russian diversion groups trying to enter their territory at night, said a local security guard, Serhiy Homenko.

Before the Belarusian military exercises, the Ukrainian armed forces in the region are being put on high alert.

“Units are being brought to a higher level of combat readiness, practical measures are being taken to receive conscripts, weapons and military equipment are being removed from storage,” a military command spokesman wrote on Facebook on Sunday.

Access to the area is very limited, even for the volunteers who are ubiquitous in other parts of Ukraine. The border service and the army have a strict ban on journalists and civilians approaching the border.

Mr Pinchuk, the deputy mayor of Horodnya, said the fear among the citizens was accompanied by a sadness specific to this northern region.

At this triple border is a monument built in 1975 on the place where the three nations come together. Known as the ‘Three Sisters’, it celebrated the unity of what in Soviet times were considered the three Slavic peoples of the union.

Many people in the area speak ‘Surzhyk’, a local combination of Ukrainian, Russian and Belarusian. A museum of national friendship and an annual music festival took place on the site.

“Thousands of people came every year and slept in tents, played sports, got to know each other and watched performances,” recalls Nataliya, who worked for 26 years at the Three Sisters museum in Senkivka and refused to give her last name for security reasons.

The festival ended in 2014, when Russia annexed Crimea and supported separatists in Ukraine’s Donbas region. But many local residents have family ties across borders. The disintegration of a sense of shared camaraderie has left a veil of melancholy over the region.

“We couldn’t believe that these friendly nations, our sisters, could attack us,” Nataliya said, sobbing. “What is this war?”

Some residents living close to the Belarusian border sought refuge with relatives there, Mr Pinchuk said, but soon returned amid disagreements over the war.

“They came back because they couldn’t find a common language with their relatives,” said Mr. Pinchuk. “A brother told his sister what was going on, but the sister believed the propaganda on TV instead. People have become zombified.”

The Kalivoshkos, the retirees from Senkivka, said they had a son in Belarus and one in Kiev. Mr. Kalivoshko was moved to tears when he started talking about his youngest son in Belarus.

“He has no information about the war,” Mrs. Kalivoshko said sadly.

In mid-May, local authorities in Ukraine ordered the destruction of the Three Sisters monument. They are considering setting up something else instead.

“With neighbors like that, we need a wall,” said Border Guard Commander Mr. Homenko. “Or at least a lot of mines.”