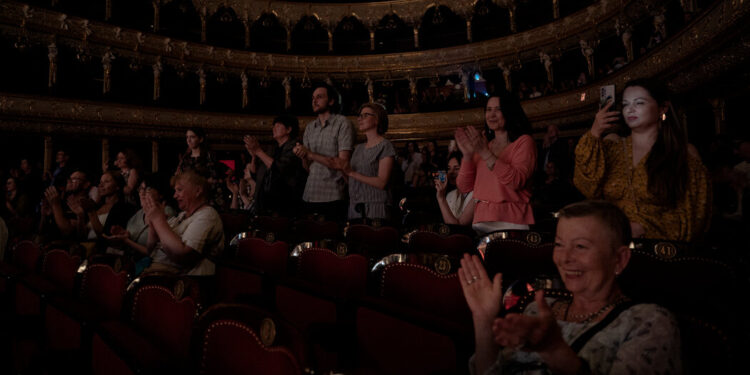 ODESA, Ukraine – In a country at war and a city yearning for any semblance of normalcy, the Odessa Opera reopened for the first time since the start of the Russian invasion, confirming civilization against the barbarity unleashed from Moscow.

The Friday performance at the magnificent Opera Theater, opened in 1810 on the plateau above the now-closed harbor on the Black Sea, began with an impassioned rendition of the Ukrainian national anthem. Images of wheat waving in the wind formed the background, a reminder of the grain from the fertile hinterland that has long made Odessa rich, but now sits in silos as war rages and global food shortages mount.

“In case of sirens, go to the shelter in the theater,” said Ilona Trach, the theater official who presented the program. “You are the soul of this opera house and we think it is very important to show that we can perform after 115 days of silence.”

Odessa has been generally quiet in recent weeks, but just 70 miles to the east — in the port city of Mykolaiv, where President Volodymyr Zelensky visited on Saturday — Russian shelling is a daily attack. That Russian President Vladimir V. Putin covets Odesa – as a port crucial to the Ukrainian economy, as a city long part of the Russian and then Soviet empire and as a cultural symbol – is no secret.

If the city’s cobbled, tree-lined boulevards suggest calm, it’s a fragile silence that can be broken at any moment. But then Odessa—its history a procession of triumph and trauma as boundaries shifted, the Holocaust enveloped it, and cycles of boom and failure followed one another—always lived for the moment.

The theater – a rococo palace of golden wickerwork, red Lyonnais velvet, chandeliers and mirrors – was about a third full due to security restrictions. Viacheslav Chernukho-Volich, chief conductor of the opera, led a performance with a duet from ‘Romeo and Juliet’ and arias from ‘Tosca’, ‘Turandot’ and by Odessa-born composer Kostiantyn Dankevych.

The music seemed a defiant marvel of culture and beauty, the ultimate rebuke of Russian brutality in Bucha and Mariupol, places that have become synonymous with the needless destruction unleashed by Mr Putin in a war that reflects his obsession that Ukraine is a fictional nation.

“We got permission from the military to act ten days ago, and today is pure luck,” Mr Chernukho-Volich said. “At the beginning of the war, the explosions and sirens terrified me, as if I was plunged into some unreality, a WWII movie, but people get used to everything. It is difficult, but we still want to believe in the victory of civilization.”

Chernukho-Volich worked in Moscow for several years, but when Putin annexed Crimea in 2014 and unleashed a separatist war in Ukraine’s eastern Donbas region, he said he had a revelation: the imperial idea was inextricably linked to Russia, and any politician, like Mr. Putin, willing to unleash his elixir would thrive right at home and threaten the world. He left.

Now he performs in an opera house originally designed by a Saint Petersburg architect and rebuilt after a fire by Viennese architects, whose facade is decorated with a bust of Alexander Pushkin; and he lives in a city founded by a Russian empress and largely furnished by a French duke, which over the years has been home to merchants of every creed and creed, from the Mediterranean and from the steppes of Central Asia.

All this Mr Putin wants to put under the increasingly brutal oppression of his rule, in the name of a Russian empire. He wants to silence the polyglot murmurs of Odessa, a city defined by its openness, whose music is the mingling.

“Odesa has its own nationality,” said Grigory Barats, a member of Odessa’s Jewish community largely scattered by the Russian invasion. While attending the concert, he said he thought of his 96-year-old mother in Brooklyn, who once worked in the theater.

The applause at the end of the performance continued, punctuated by shouts of “Bravo!” Backstage was Marina Najmytenko, a soprano who played Julia, full of pride and emotion. “It is art that is going to help us survive and our essence so we can win this war,” she said.

When, I asked, would that be? ‘Unfortunately,’ she said, ‘it will take a while. It makes us depressed how crazy Putin seems to be.” But, she continued, Juliet gave her a special inspiration. “It’s Shakespeare, it’s youth and it’s pure love.”

In a sense, the opening of the Opera, in a city hit just two months ago by a rocket attack that killed eight people, has captured two facets of Ukraine as the war progresses and the front lines move slowly or not at all: a country where something At first glance, normal life has been restored in large areas, even though there is heavy fighting in the east and parts of the south.

“It is important to show that Odessa is alive, that Ukraine is alive, that we want to live and create, while the road of the Russian occupier is murderous and dead,” Odessa mayor Gennadiy Trukhanov said in an interview. “If Mr Putin dared to hit the opera, the hatred he would face around the world would be unimaginable.”

Trukhanov, long seen as having pro-Russian sympathies, has become an outspoken defender of Ukraine and his city since the beginning of the war. He brushed aside accusations of association with organized crime and said he was saddened to see “Russia nullify its claim to be a cultural nation”.

Could Mr Putin attack downtown Odessa? “Anyone who is capable of Bucha, of Mariupol, of what is happening further down in Mykolaiv, is capable of anything,” he said. “That’s what we learned.”

For now, however, the show continues in unstoppable Odessa, even as cultural tensions mount. Trukhanov is under pressure to change the name Pushkin Street, near City Hall. The brilliant Russian playwright and novelist lived in Odessa in 1823.

“No,” said the mayor. “I wouldn’t support that. Odessa is the intercultural capital of Ukraine. I am concerned about the growing hatred of all things Russian.”

But that hatred may be the inevitable result of Mr Putin’s unprovoked war: tell a nation it doesn’t exist and that it will work together like never before in a defiant decision to protect its existence.