Rattled by the war in Ukraine, Moldova aims to evade Russia’s long shadow 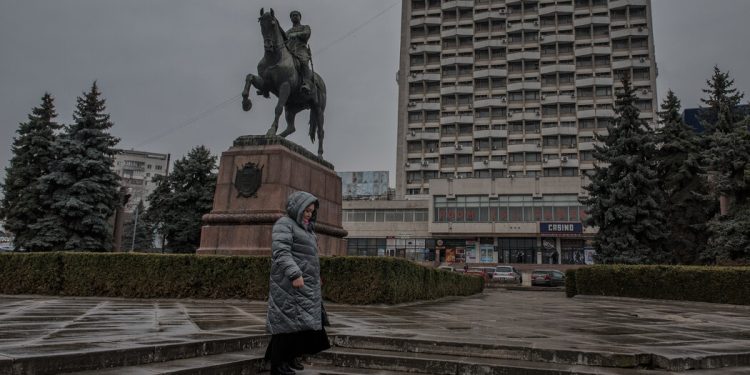 CHISINAU, Moldova — Before the war broke out next door, Moldovans had big plans for their country.

But the Russian invasion of Ukraine left Moldova, a former Soviet republic and one of Europe’s poorest nations, in an extremely vulnerable situation, threatening its economic development, burdening its society with waves of refugees and raising existential fears of yet another Russian occupation. .

The war jitters also add a new chapter to Moldova’s long and increasingly desperate attempt to break free from Moscow’s clutches. To pursue that goal, it recently applied to join the European Union, but the prospect of being admitted any time soon is slim.

Moldovans’ fears mounted again on Friday, when a Russian general said his country’s military now plans to take the entire southern coast of Ukraine. That would create a land bridge from Russia in the east to Transnistria, a heavily armed breakaway region in eastern Moldova — bordering Ukraine — controlled by Russia.

Whether Russia has the resources to gobble up such a large chunk of Ukrainian territory is questionable, especially given the massive losses it suffered in the battle for Kiev. But whether real or just an attempt to stir up trouble in the region, the Moldovans are taking the general’s threat seriously.

The Moldovan government has long been nervous about Transnistria, a thin patch of territory controlled by at least 12,000 separatists and Russian troops. Since the outbreak of the war, the Moldovan and Ukrainian armies have faced additional concerns about whether the Transnistrians would jump in and attack Ukraine from the west. So far that hasn’t happened.

Moldova, tucked between Romania and Ukraine, is small – with fewer than three million people – and has been torn for centuries between greater powers: first the Ottomans and Russia, and now Europe and Russia. The theme is clearly Russia, and Russia won’t let it go.

Moscow has a stranglehold on nearly 100 percent of Moldova’s energy supply. And the Kremlin is constantly trying to excite Moldova’s many Russian-speakers, who are sensitive to its propaganda, especially in Transnistria.

That appeared to have happened on Friday, when Major General Rustam Minnekayev said, according to Russian news media, “Russian control of southern Ukraine is another way out into Transnistria, where cases of Russian-speaking people are being suppressed.”

The Moldovan government immediately called on the Russian ambassador to complain about the general’s statement, saying it was “not only unacceptable but also unfounded” and sparked “mounting tensions”.

For Ms. Sandu, 49, the country’s first female president, it was another hurdle on a dangerous path she has been trying to take since the start of the crisis.

Moldova has condemned Russia’s invasion of Ukraine and banned Moldovans from sticking pro-Russian symbols on their cars. At the same time, the country did not fully align itself with European Union sanctions against Russia, fearing being cut off from Russian gas.

The war is hard not only for her, but for almost everyone here. Before hostilities began, Adrian Trofim, whose family owns a 19th-century winery and rural resort, thought he was finally taking a break after struggling for two years during the coronavirus pandemic. He was in the process of adding a grand piano to the hotel, setting up a spa focused on wine-based treatments, and preparing to produce a sparkling wine.

But now his operations are in jeopardy. Brandy worth a quarter of a million dollars to ship to Belarus is locked in his warehouses. His regular Ukrainian customers cannot pay him, which has cost him several hundred thousand dollars. And he can’t ship his chardonnays to China, one of his new markets, because the port in Odessa, Ukraine, which he uses for export, was shut down as soon as the first bombs fell in February.

“I don’t know what to do,” said Mr Trofim, who may soon have to lay off nearly half of his staff. “Everything is frozen until we understand how to live with this situation.”

It may take a while. When the war in Ukraine started, residents of Chisinau said they were awakened by the sounds of explosions not so distant. Then Ukrainian refugees began pouring in — more than 400,000 have arrived, Moldovan officials said — putting a heavy strain on public services in a country where the average annual income is less than $6,000.

Prices for basic goods then skyrocketed when supply chains were disrupted. And entrepreneurs had to convince their employees, terrified that the war would enter Moldova, not to flee the country, following the example of the hundreds of thousands of Moldovans who moved abroad in the past decade.

“We were already considered high risk,” said Carmina Vicol, head of the US Chamber of Commerce in Moldova. “We had just started convincing investors to shoot us. Now everyone has withdrawn.”

It’s not all bad news. Some Ukrainian companies are considering moving to Moldova in search of a safer environment. And with all the foreign dignitaries (and news crews) pouring in, its international profile has taken a lift, prompting the government to rebrand Moldova as “a small country with a big heart” last month.

Many Russians have discovered that big heart a long time ago. During Soviet times, retired officers flocked to Moldova, drawn to the scenery, good food and sunshine. After the collapse of the Soviet Union, the country was led by pro-Russian elites, who maintained strong ties to Moscow, especially in the energy field.

Moldova receives all its gas from companies controlled by Russia. And even though Moldovan leaders have talked about buying the country off Russian gas and getting energy from other countries like Azerbaijan, Turkey and Romania, none of those countries can currently come close to what Russia offers.

And so Russia continues to use its hegemony over gas prices to push Moldova around. For example, Russia has indicated that it would lower prices if Moldova agreed to make concessions to Transnistria, which Moldova has refused.

Moldova’s twin problems, energy and Transnistria, are linked. During the Soviet era, the largest power plant in Moldova and the two largest gas filling stations were built in Transnistria.

“If you look at the map, it doesn’t make sense,” said Victor Parlicov, an energy analyst and former government official. “It was built this way in case Moldova tried to go its own way.”

Transnistria has its own flag, complete with a Soviet-style hammer and sickle, and a distinct identity from the rest of Moldova. Its roots go back to the 1920s, when the Soviet Union established a small republic in the same area, before incorporating parts of it into the Moldavian Soviet Socialist Republic during World War II.” Mr Parlicov said this was part of a pattern of Soviet authorities redrafting republics’ borders from historical reality, creating the potential for conflict.

Transnistria’s situation mirrors that of the Donbas region of Ukraine, where Russian-backed separatists rose up in the wake of the 2014 anti-Russian uprising, triggering a series of events that led to war. Transnistria also complicates Moldova’s ambitions to join the European Union.

“We would like to be part of the EU,” said Serghei Diaconu, the deputy interior minister. But, he added half-jokingly, Transnistria was “a great pain” that could discourage the EU from accepting Moldova.

Joining NATO would be an even bigger task. Neutrality is enshrined in Moldova’s constitution, a holdover from the early 1990s when it tried to stand on its own two feet without antagonizing Russia. Now Moldova’s leaders are questioning the wisdom of that approach.

“If you ask me if neutrality will keep us safe, I don’t know,” said Ms. Sandu, the president. “It hasn’t helped over the past three decades to convince Russia to pull its troops out of the country.”

The geopolitical tightrope the country has to walk means, in the eyes of many Moldovans, that its future is intertwined with that of Russia. For example, Mr Trofim, the winemaker, said nearly half of his business relied on Russia, Ukraine and Belarus.

Looking at the winery’s sprawling, neat gardens, empty except for a few visitors, he said he was shocked by what Russia had done in Ukraine, but that he couldn’t condemn anyone forever.

“I cannot say that I will never do business with Russia,” said Mr Trofim. “It’s about the well-being of my company.”