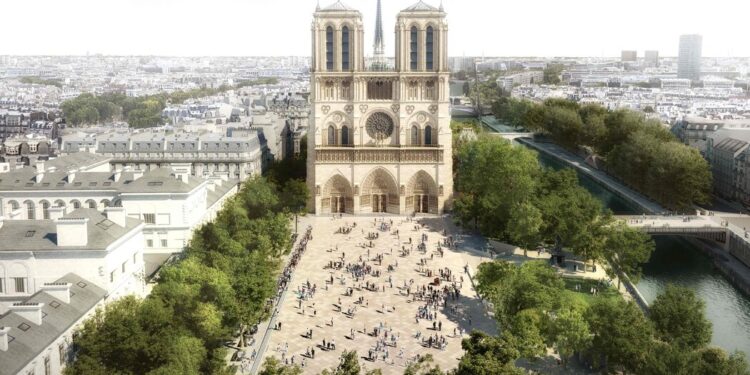 PARIS – A renovation of the area around Notre-Dame Cathedral in Paris will open it up to the River Seine and help millions of visitors move more easily while mitigating the effects of climate change, city officials said Monday.

Notre-Dame, which was destroyed by a devastating fire in 2019, is closed to visitors and is still being rebuilt, with plans to partially reopen in 2024, just in time for the Paris Olympics.

The understated redesign of the Notre-Dame area, which leaves the long, rectangular stone plaza in front of the cathedral largely intact, won’t radically change the neighborhood. But Paris officials said the planned changes would improve the visitor experience and make the city more resilient in the face of rising temperatures.

Paris Mayor Anne Hidalgo said at a news conference Monday that Notre-Dame should “be left in its beauty and everything around it should be a showcase for that beauty.”

But, she added, “a city like ours can no longer think outside of climate change.”

The redesign sees the removal of fencing to expand and merge the parks around Notre-Dame, make adjacent streets more pedestrian-friendly and plant more than 30 percent more vegetation in the area, including trees to provide additional shade. . Plans also call for transforming a parking lot currently under the cathedral’s main square into an underground walkway that opens onto the banks of the Seine and provides access to a welcome center and archaeological museum, officials said.

The new design includes a cooling system that will allow a five millimeter thin layer of water (about one-fifth of an inch) to flow over the plaza in front of the cathedral during heat waves, enough to lower the temperature a few degrees without flooding the area — and to give tourists a glittering background for their photos, officials added.

The city hall of Paris will pay for the project, with a budget of 50 million euros or 53 million dollars.

The area is set to reopen in 2024, when most of the cathedral’s reconstruction will finish, allowing worshipers to use the space again. But renovation of the cathedral’s suburbs won’t really begin until the site is clear of scaffolding and construction bungalows, and it’s not expected to be finished until 2027.

The city had launched an international architecture and landscaping competition for the renovation, in which officials from the city, the Paris Diocese and the task force responsible for rebuilding Notre-Dame acted as judges. The city also organized a six-monthly consultation with local residents and businesses, and a committee of 20 randomly selected citizens provided input.

Mr Smets said the square in front of the cathedral was intended to be a “clearance” surrounded by trees, highlighting Notre-Dame’s famous western facade, creating new views of the Seine and providing respite from rising temperatures.

“By working on wind, shade and moisture, we can create a microclimate around the cathedral that increases the city’s resilience and prepares it for an uncertain climatic future,” he said.

First elected in 2014, Ms Hidalgo has vowed to transform Paris into a greener city by drastically reducing the number of cars driving in the heart of the French capital and increasing the number of bicycle paths.

Jean XXIII Square, a park behind the cathedral that is currently fenced, will be opened, with new lawns extending to the edge of the Île de la Cité, the island on the Seine where the cathedral is located. The park will also merge with the gardens that run along the southern edge of the cathedral, creating a 1,300-foot-long green space where visitors can admire the cathedral’s flying buttresses and stained glass windows.

About 13 million tourists visited Notre-Dame each year before the fire, meandering in long haphazard lines in front and crowding narrow streets around it.

Reverend Gilles Drouin, an adviser to the Archbishop of Paris, said at the press conference on Monday that the aim was to “decompartmentalize spaces that somewhat constrain it”.

“I am very happy that the tragedy of the fire will allow us to restore physical and symbolic ties between the capital and its urban environment,” said Father Drouin.

The 2019 fire destroyed the latticework of huge, old wood that made up the attic of Notre-Dame, where the fire started, the lead sheath of the roof melted and the overall stability of the iconic stone structure that had stood for eight centuries , endangered. Molten metal, flaming beams and the spire fell into the interior of the cathedral, causing even more damage.

A definitive cause of the fire should never be established; the leading theories are an electrical short or a cigarette being thrown out in the attic by a worker.

Last year, the building was stabilized and restoration and reconstruction work is now underway, in line with President Emmanuel Macron’s ambitious pledge to reopen the cathedral by 2024. The cathedral’s organ is being cleaned and 1,000 oak trees have been cut across the country to rebuild the spire and attic.

Macron had dropped the idea of ​​replacing the cathedral’s 19th-century spire with a contemporary one, but plans to modernize the inside of the building were given the green light in December.

The fire also contaminated the cathedral grounds with clouds of toxic dust and exposed nearby schools, nurseries, public parks and other parts of Paris to alarming levels of lead, forcing French authorities to take decontamination measures at the construction site and shut off and clean the area several times.

Advocacy groups have filed lawsuits alleging authorities failed to address the risks of lead contamination, but those concerns have largely faded from public view in recent months, and the cathedral’s roof is expected to be rebuilt with lead.