The crime first came to light last week, when Ukraine’s Attorney General, Iryna Venediktova, said in a Facebook post that a Russian soldier killed an unarmed civilian and then repeatedly raped his wife. Days later, the White House said it was concerned about emerging reports of sexual violence in Ukraine.

On Monday evening, The Times of London published the woman’s chilling report. Under the pseudonym Natalya, she told a reporter that she had been at her home in a village near the Ukrainian capital Kiev when she heard footsteps and a gunshot. Moments later, her husband lay dead at her front door, and two Russian soldiers stood beside her, one with a gun to her head.

“I shot your husband because he was a Nazi,” the gunman told her, before he and the other soldier raped her while her 4-year-old son sobbed in a boiler room next door, according to the Times. She said she was later raped a second time by the soldiers and was eventually able to flee to western Ukraine with her son.

“I could have kept quiet, but when we got to the police, my husband’s sister forced me to speak, and there was no turning back,” she told the Times. “I understand that many people who have been injured would remain silent because they are afraid. A lot of people don’t believe these horrible things happen.”

A Kremlin spokesman, Dmitri S. Peskov, rejected Ms. Venediktova’s claim, telling reporters in Moscow last week that “we don’t believe it at all.”

“It’s a lie,” Mr Peskov said, according to the Interfax news agency.

Ms. Venediktova said a Russian soldier is wanted for arrest “on suspicion of violating the laws and customs of war”.

Ukrainian officials claim that numerous cases of rape and sexual assault have taken place in the country since the Russian invasion began on February 24.

Maria Mezentseva, a Ukrainian MP, told Sky News on Sunday the woman’s story, saying there were “many more victims”. She did not provide further details or say how she learned of other attacks, but said she expected them to come to light once the victims were “ready to talk”.

“We will certainly not be silent,” she said.

Rape and other forms of sexual violence, which have been associated with armed conflict throughout history, can constitute war crimes and crimes against humanity. Russian troops and Moscow-backed armed groups have been accused of committing sexual violence in other conflicts, most recently involving detainees in eastern Ukraine.

This month, Ukraine’s Foreign Minister Dmytro Kuleba said he had little confidence that international organizations, such as the International Criminal Court in The Hague, would hold Russian soldiers accountable. “When Russian soldiers are raping women in Ukrainian cities – it’s obviously hard to talk about the efficiency of international law,” he said via video link at an event at Chatham House, a think tank in London.

Ongoing peace talks. Russia said it would greatly reduce military activity near Kiev and the northern city of Chernihiv. The announcement was the first sign of progress that came from the peace talks between Ukraine and Russia in Istanbul.

To the ground. Russia’s apparent concessions in northern Ukraine reflected a successful Ukrainian resistance that has stranded Russian forces around the outskirts of Kiev and recaptured territory near the capital and towns closer to the Russian border.

Biden’s comments. Speaking in Warsaw on Saturday, President Biden said President Vladimir V. Putin “cannot stay in power”, prompting US officials to rush to roll back the ad-lib. On Monday, Mr Biden stuck to his comment but said it was a personal expression of his “moral outrage.”

According to Kateryna Busol, a Chatham House employee and Ukrainian lawyer who documented allegations of sexual assault after Russia’s seizure and annexation of Crimea in 2014, stories of rape and sexual assault emerged almost immediately after Russia invaded Ukraine.

“These reports are growing and we are hearing that they are much more widespread than the Inspector General’s,” Ms Busol said in a telephone interview from Regensburg, Germany, where she fled Kiev in the days following the assassination. invasion.

“What we hear through word of mouth from acquaintances of survivors in the country is appalling,” she added. “I have described incidents of gang rape, rape in front of children and sexual assault after killing relatives.”

Most of the reports, she said, involved female victims and came from cities in eastern and southern Ukraine occupied by Russian troops. 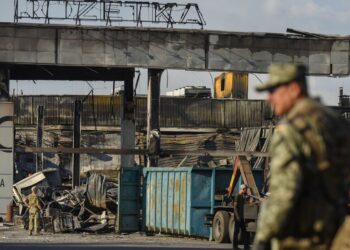