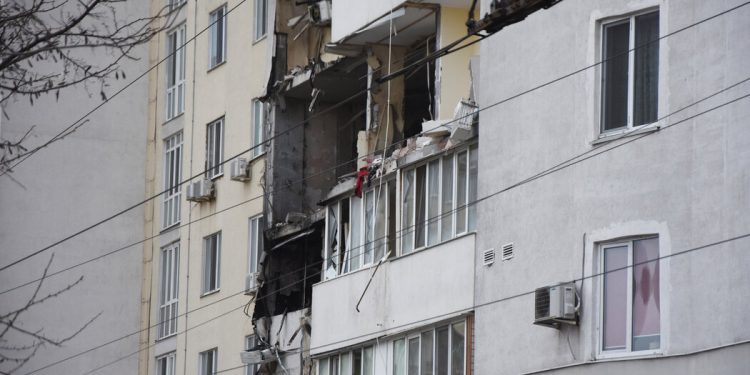 At least six people were killed when two cruise missiles hit a residential area on the outskirts of the Black Sea port city of Odessa on Saturday, Ukrainian officials said. Given the extent of the damage, officials said the number of casualties is sure to rise.

“There will be more,” Sergei Nazarov, an assistant to the mayor of Odessa, said in a text message.

He said the rockets hit a residential area in the Tairve district in the far west of the city. Photos and videos from the scene, including those on the city government’s Telegram channel, appeared to show extensive damage to a large residential complex, partially obscured by thick, black plumes of smoke.

“All this while peaceful Odessa was preparing for Easter Sunday,” Odessa mayor Gennady Trukhanov said in a statement to the city’s Telegram channel. Orthodox Christians, who make up the majority in Ukraine, are celebrating Easter this Sunday, and some in the Ukrainian military had expected or hoped that the shelling would end somewhat.

At least 18 people were injured in the strike, Andriy Yermak, the head of the presidential administration. He said that among the dead was a three-month-old baby.

The missile strike on Odessa comes a day after a Russian general outlined what appeared to be a broad new set of military targets, including the seizure of all Ukrainian lands along the Black Sea, including Odessa.

Although taking Odessa appeared to be a major goal of the Russian army at the start of the war, attempts by Russian troops to march west along the coastline were hampered by fierce Ukrainian resistance and logistical difficulties. The sinking this month of the Moskva, a warship in Russia’s Black Sea fleet, seemed to put an end to speculation that Moscow could launch an amphibious assault on the city.

In the past, Russian forces have launched missile strikes on Odessa and the surrounding region, both by air and sea, but those attacks have largely targeted military targets and strategic infrastructure. Until Saturday, Odessa had been largely spared from the heavy casualty attacks on civilians suffered by other Ukrainian cities.

Saturday’s attack was carried out by a Russian strategic bomber Tu-95 flying over the Caspian Sea, according to a statement by Ukraine’s southern air defense forces. It said the bomber fired six cruise missiles, two of which were disabled by Ukraine’s missile defense system.

Russia’s defense ministry later said it had fired “high-precision long-range missiles” at a logistics terminal at a military airport near Odessa, which it said was storing weapons supplied by the United States and European countries.

“The sole purpose of Russian missile strikes on Odessa is terror,” Kuleba wrote on Twitter. “We need a wall between civilization and barbarians attacking peaceful cities with missiles.”