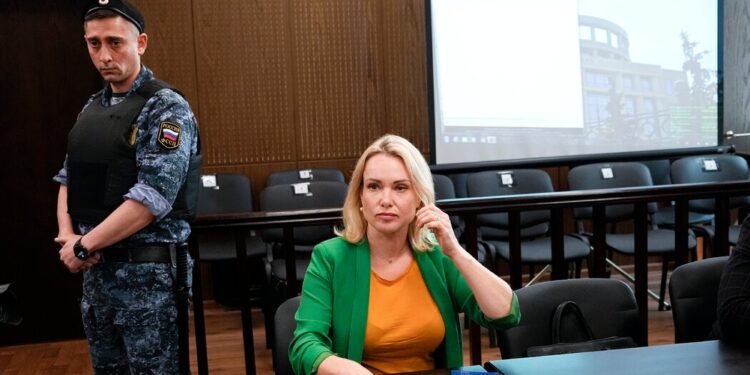 Russian investigators arrested a former state television journalist on Wednesday, months after she staged a rare live broadcast against the war in Ukraine.

The journalist, Marina Ovsyannikova, 44, was accused of spreading false information about the country’s armed forces.

Ms Ovsyannikova was still asleep early in the morning when a group of detectives and police officers raided her home and took her for questioning over the false information allegation.

“Are the 350 children who died in Ukraine fake?” she asked on her Facebook account after the detention, adding: “How many children have to die before you stop?”

Dmitri Zakhvatov, Ms. Ovsyannikova’s lawyer, said in a message on the Telegram messaging app that his client was given up to 10 years in prison for her protest in July, when she stood on an embankment in Moscow facing the Kremlin with a poster that read: “Putin is a murderer. His soldiers are fascists.”

The court has not decided whether Ms Ovsyannikova should be arrested, he said, but she was ordered to spend the night at the Moscow police headquarters.

Ms. Ovsyannikova was working as a producer on the flagship news program on Channel One, one of Russia’s most popular television channels, when she appeared behind an anchor during an evening newscast with a poster that read: ‘Stop the war. Don’t believe the propaganda. They’re lying to you here.”

She was charged with organizing an illegal protest and was fined.

She later quit her job and continued to openly criticize the war. On Monday, a Moscow court ordered Ms. Ovsyannikova was fined $650 for discrediting the Russian armed forces, her second fine related to that charge.

Thousands of Russians protested the war in Ukraine shortly after President Vladimir V. Putin sent troops there. The Russian government reacted swiftly by delegitimizing all criticism of the war, which sent chilling shockwaves through the country’s civil society.

According to OVD Info, a rights organization that monitors such cases, more than 200 people have been charged with criminal offenses after protests against the war. In July, a Moscow court sentenced Aleksei Gorinov, an opposition MP, to seven years in prison for denouncing the invasion.