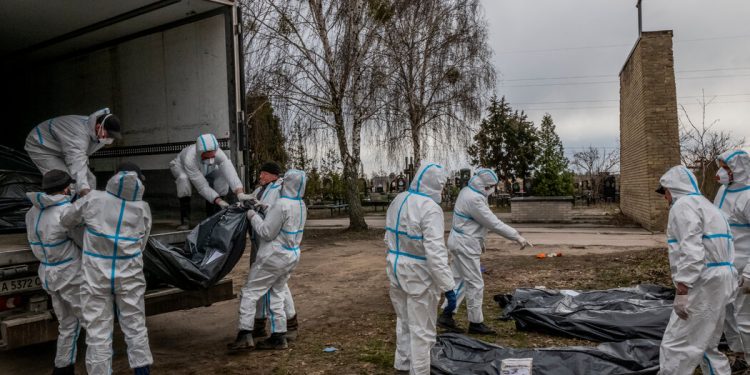 State television programs in Russia do not shy away from images of death and destruction in Ukraine. Viewers have seen corpses on the streets of Bucha, burnt-out cars at a train station in Kramatorsk and the remains of a hospital complex that was attacked in Mariupol.

But the images are accompanied by rhetoric that blames Ukraine or the West for the attacks, or accuses the Ukrainian government of forgery. The word “fake” is constantly being thrown around – in some cases printed in bright red lettering on horrific videos and photos.

When the first photos and videos of the massacre in Bucha, a suburb of Kiev, began to appear on April 3, Russian propagandists reacted quickly by saying that the bodies in the street were those of actors.

“They call this proof,” said a news presenter on Channel One. “This is another fake. The images are staged.”

On Telegram, a broadcasting-capable app, channels devoted to alleged “forgeries” are pumping out the same message, falsely claiming that a closer look at a video of bodies scattered on Yablonska Street in Bucha shows one of the corpses that one arm and another that stands up.

One of the most popular news programs in the country, “60 Minutes” on the Russia-1 channel, uses the English word fake liberally and stamps it on screenshots of articles published by the Western news media and on videos and photos from Ukraine.

“There is no evidence of casualties, but the West does not need the truth,” the show’s host, Olga Skabeyeva, said in an episode. As she spoke, huge screens in the studio behind her projected a video of corpses in Bucha, with “fake” written in red in one corner.

On Channel One, an entire program devoted to exposing ‘fakes’ is presented by Alexander Smol, who also hosts the Russian equivalent of ‘America’s Funniest Home Videos’.

In every episode of “AntiFake,” Mr. Three experts on history, military tactics, social media, or data—mostly men—gathered together to review the details of social media posts or articles about the war in Ukraine that appeared in Western publications such as DailyExpertNews, The Guardian, the BBC and The Associated Press.

Mr Smol and his guests have argued that the scenes in Bucha must have been staged. There is not enough blood, they say. The bodies are positioned in different ways in photos, they claim.

They have not limited their campaign to Bucha.

In a recent episode, Mr. Smol broadcast a video of doctors unsuccessfully trying to resuscitate a 6-year-old girl rushed to a hospital in Mariupol after a catastrophic shooting. The video was first released by The AP in late February and has been circulating on Ukrainian television and Western news media sites.

As the video of the dying girl played over and over — the word “fake” stamped on it — the men on Mr. Smol’s show said it was shot from too many angles and in too smooth a way to be real. And they said a cameraman wouldn’t be allowed in an emergency room.

Mr Smol and others in his program have also echoed the state’s story that Ukrainian troops were behind the attacks on the hospital complex in Mariupol – a strike that injured a pregnant woman and injured staff and maternity wards – and the railway station in Kramatorsk, which at least 50 people died.