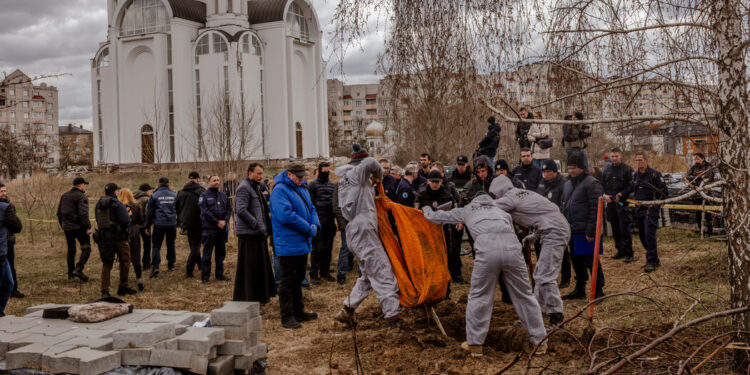 BUCHA, Ukraine — When soldiers of Russia’s 64th Motorized Rifle Brigade arrived in Bucha in mid-March, they brought a new level of death and terror to the city.

In just one corner of this suburb of Kiev, where the brigade took control, 12 people were killed over the next 18 days, including all residents of six houses where the soldiers had set up camp.

Olha Havryliuk’s son and son-in-law, along with a stranger, were shot in the head in the yard of their home. The Russian soldiers broke the gate of the Havryliuks, parked their armored vehicle in the yard and entered the house. They cooked in the neighbor’s yard, slaughtered and plucked chickens and grilled them on a barbecue while the men lay dead yards down the alley.

The story of Bucha and his horrors has unfolded in chapters as new revelations about Russian atrocities emerge, fueling outrage among Ukrainians and much of the world. But prosecutors and military intelligence officials investigated early and gathered evidence to try to identify the perpetrators responsible for the massacres, torture and rapes in the once-quiet suburb.

Working with war crimes and forensic experts from around the world, Ukrainian investigators have drawn some preliminary conclusions, particularly focusing on the 64th Brigade. They have already identified 10 soldiers of the unit and charged them with war crimes.

Ukrainian officials say the brigade was formed after Russia struggled in a war with Georgia in 2008 and was awarded an honorary title by President Vladimir V. Putin last month for his performance in Ukraine.

Still, the brigade took little part in combat, coming in after other units took control of Bucha and then tasked with “holding” it. The troops established checkpoints throughout the city, parked their armored vehicles in people’s courtyards and took over their homes.

“They have imprisoned our people,” said Ruslan Kravchenko, the chief prosecutor of the Bucha district, describing the actions of the accused soldiers. “They tied their hands and legs and covered their eyes. They beat them in the chest with fists and feet, and with rifle butts in the chest, imitating executions.”

The 64th Brigade’s name and a list of 1,600 of its soldiers were found among computer files left behind at the Russian military headquarters in Bucha, providing researchers with a huge source of information as they began their investigation. Dmytro Replianchuk of Slidtsvo.info, a Ukrainian investigative news agency, quickly found the social media profiles of dozens of names, including agents.

Three victims who survived beatings and torture were able to identify the perpetrators in the photos, Mr Kravchenko said.

One of the victims was Yuriy, 50, a factory worker who lives near one of the most infamous Russian bases, at 144 Yablunska Street. On March 13, a unit of the 64th Brigade came to search his house. He said he identified the soldiers when photos were shown to him by prosecutors. The soldiers were rough and rude, he said. “You could tell they came from the Taiga,” he said, referring to the Siberian forest. “They just talk to bears.”

Yuriy managed to avoid suspicion, but on March 19, the soldiers returned and detained his neighbor Oleksiy. Like several others interviewed for this article, the men asked to be identified by their first name only for their safety.

Oleksiy declined to be interviewed, but confirmed that he had been detained twice by the Russian unit, had been interrogated for several hours in a basement and had undergone a mock execution when the soldiers fired a pistol behind him. Still shocked, he said, “I just want to try and forget it all.”

Created to ‘frighten the population’

Located in Russia’s far east near the border with China, the 64th Brigade belongs to the Eastern Military District, long regarded as the part of the Russian military with the lowest levels of training and equipment.

The brigade has ethnic Russian commanders, but is largely made up of soldiers from ethnic minorities and disadvantaged communities, said Colonel Mykola Krasny, the head of public affairs for Ukraine’s military intelligence.

In radio conversations intercepted by Ukrainian troops, some Russians expressed surprise that village roads in the outskirts of Kiev, the capital of Ukraine, were paved with asphalt, he said.

“We see it as a deliberate policy to get soldiers out of depressed regions of Russia,” Colonel Krasny said.

Not much is known about the brigade, but Colonel Krasny claimed it was notable for its lack of morality, beating soldiers and stealing. The brigade, which grew out of a regiment that had served in Chechnya, was formed on Jan. 1, 2009, shortly after the Russian war in Georgia, Colonel Krasny said. The goal was clear, he added: to build a fearsome army unit that could provide control.

“The consequences of this policy were what happened in Bucha,” he said. “No discipline and these aggressive habits, it seems it was made to scare the population.”

He claimed that the disadvantaged background of the Russian soldiers, and the fact that they could act with impunity, prompted them to ‘do unspeakable things’.

It wasn’t just the enemy who suffered from their brutality. The Russian military has long had a reputation for hazing its own soldiers, and on a cell phone left behind in Bucha by a member of the 64th, investigators recently found evidence of the practice: a video in which an officer talks to a subordinate and then suddenly punches him in the side of the head while other soldiers stand talking.

The Russian government has not responded to a request for comment on the allegations against the 64th Brigade, but has repeatedly claimed that the allegations that its troops committed atrocities in Bucha and elsewhere are false.

Western analysts who have studied the Russian military said the behavior of the troops in Bucha was not a surprise.

“It’s consistent with the way they think they’re reacting,” said Nick Reynolds, a land warfare researcher at the Royal United Services Institute, a military research organization in London. “Retaliations are an essential part of the way the Russian military conducts business.”

The ‘Bad Guys’ will come

Assassinations took place in Bucha from the first days when Russian troops appeared. The first units were airborne assault troops, paratroopers and special forces that fired on cars and civilians in the street and detained men suspected of being in the Ukrainian army or territorial defenses.

The scale of the killings and the apparent lack of hesitation among Russian soldiers to carry them out has led Ukrainian officials to suspect they were acting on orders.

“They couldn’t not know,” Bucha’s prosecutor, Mr. Kravchenko, said of senior military commanders. “I think the terror was planned.”

Many of the documented murders took place on Yablunska Street, where bodies lay for weeks, visible on satellite images. But not far away, on a corner of Ivana Franka Street, after March 12, some kind of hell was unfolding.

Residents had already been warned that it would get worse. A pensioner, Mykola, 67, said Russian troops first approaching the area had advised him to leave while he could. “After us will come such bad guys,” the commander told him, he recalled. “I think they had radio contact and knew who was coming, and they had their own opinion of them.”

Spring flowers are growing all over Bucha, fruit trees are in bloom and city workers have swept the streets and filled some bomb craters. But at the end of Ivana Franka Street, amid wrecked cars and ruined homes, there’s an eerie desolation.

“From this house to the end, no one survived,” said Ms. Havryliuk, 65. “Eleven people were killed here. Only we survived.”

Her son and son-in-law had stayed behind to care for the house and dogs, and were killed on March 12 or 13, when the 64th Brigade first arrived, she said. According to the death certificates, they had been shot in the head.

What happened in the next two weeks is hard to fathom. The few residents who stayed were confined to their homes and only occasionally dared to go outside to get water from a well. Some of them saw people being held by the Russians.

Nadezhda Cherednychenko, 50, begged the soldiers to let her son go. He was being held in the yard of a house and his arm was injured when she last saw him. She found him dead in the basement of the same house three weeks later, after the Russians withdrew.

“They must be punished,” she said of his captors. “They’ve hurt people so much. Mothers without children, fathers, children without parents. It’s something you can’t forgive.”

Neighbors who lived next door to the Havryliuks have just disappeared. Volodymyr and Tetiana Shypilo, a teacher, and their son Andriy, 39, lived in one part of the house, and Oleh Yarmolenko, 47, lived alone on the other side. “They were all our relatives,” said Mrs. Havryliuk.

Lidiya Sydorenko, 62, and her husband Serhiy, 65, lived on a side street. Their daughter, Tetiana Naumova, said she spoke to them mid-morning on March 22.

“Mother cried all the time,” said Mrs. Naumova. “She used to be an optimist, but I think she had a bad feeling.”

Minutes later, Russian soldiers entered and demanded to search their garage. They told a neighbor to leave and fired at her feet.

“By lunchtime they had them killed,” said Mrs. Naumova.

She returned to the house with her husband Vitaliy and her son Anton last month after Russian troops withdrew from Kiev. Her parents were nowhere to be found, but they found ominous traces: her father’s hat with bullet holes in it, three pools of blood, and a piece of her mother’s scalp and hair.

There was no trace of the Shypilos or of Mr. Yarmolenko, either, except traces of blood where bodies had been dragged across the floor of their house.

They examined six charred bodies found in an empty lot down the street and confirmed that they were the missing civilians: the Sydorenkos, the three Shypilos and Mr. Yarmolenko. Several had gunshot wounds, but three of them had limbs severed, including Ms Naumova’s mother, investigators told the families.

Her father had multiple gunshot wounds to the head and chest, her mother had an arm and a leg cut off, she said.

“They tortured them,” said Mrs. Havryliuk, “and burned them to cover their tracks.”