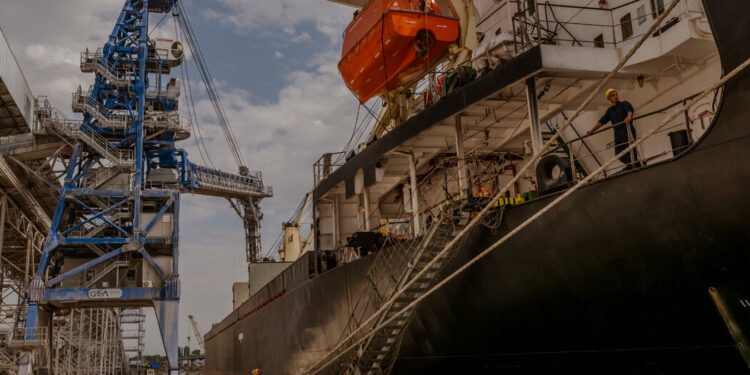 PIVDENNYI PORT, Ukraine – Sailors in blue and orange overalls milled about on the deck of the cargo ship Brave Commander on Sunday as a series of slides and conveyor belts loaded the ship’s cargo hold with 23,000 tons of wheat bound for Africa.

The Brave Commander, a Lebanese-flagged cargo ship, was scheduled to depart later in the day from Pivdennyi, one of Ukraine’s largest ports on the Black Sea, near Odessa. It is the first ship specifically chartered by the World Food Program as part of an effort to deliver much-needed grain to the countries most affected by food shortages as a result of Russia’s invasion of Ukraine.

This shipment will eventually make its way to Ethiopia, which is on “the brink of famine,” according to Marianne Ward of the World Food Program, a United Nations agency.

“This food will make a huge difference to them,” she said. “The big message for us is that the world needs Ukraine’s food.”

Last year, Ukrainian grain fed an estimated 400 million people, according to Ms. Ward, and the absence of shipments from Ukrainian ports blocked by Russian warships in the Black Sea has had major repercussions around the world. Prices have skyrocketed and tens of millions of people, mainly in the Middle East and Africa, are at risk of famine.

At least five countries are now facing famine and another 20 are on the “famine watch list,” said Denise Brown, the UN’s humanitarian coordinator for Ukraine.

The port of Pivdennyi is the last of the three main ports in the Odessa region to come online after months of hiatus since the start of the war on Feb. 24. On August 1, the first ship loaded with Ukrainian crops departed the port of Odessa, following an agreement between the United Nations and Turkey to allow the export of about 20 million tons of grain trapped in Ukrainian silos since the start of the war.

Since then, at least eight ships have successfully traversed the mining waters of the Black Sea to deliver grain to Europe, the Middle East and Asia.

Aboard the Brave Commander, which arrived in Ukraine from Istanbul last week, crew members were preparing the ship as a large parachute pumped golden wheat into the cargo hold. The sailors said they were not concerned about safety, although they expected more problems if their ship docked in Ukraine.

“We were surprised because there is war in Ukraine,” said a crew member from Syria who only mentioned his name as Mohammed. “But it wasn’t difficult.”