The positive language of a Russian negotiator clashes with the harsh rhetoric from Moscow. 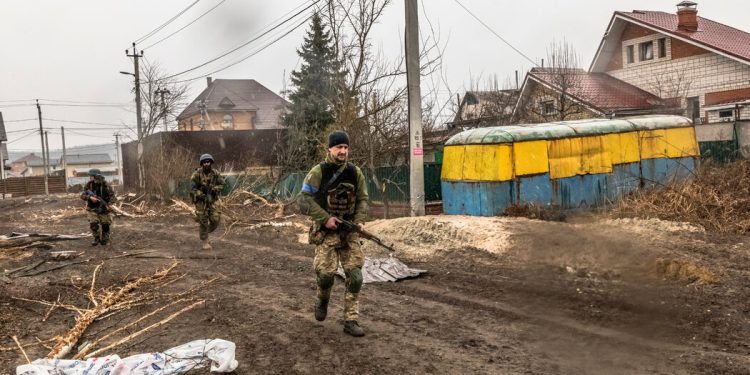 “We don’t see anything promising or breakthroughs,” Peskov told reporters. “We still have a very, very long time of work ahead of us.”

Putin’s advisers. US intelligence agencies suggest that President Vladimir V. Putin was misinformed by his advisers about the Russian military’s battle in Ukraine. The intelligence shows what appears to be growing tension between Mr Putin and the Defense Department, US officials said.

Some Russian analysts and Western officials see diplomacy as little more than a way to buy time while Russian forces regroup. Russia’s promise to call off military operations around Kiev, which the Russian Defense Ministry tossed as a good-faith de-escalation gesture, actually seemed like a way of explaining away a defeat on the battlefield.

Russian forces around Kiev were “regrouping,” the defense ministry said on Wednesday, although that claim could not be independently confirmed. The purpose of rallying troops near Kiev has always been not to take the city, but to tie up and weaken Ukrainian troops in the area, the ministry said in a statement.

“All these goals have been achieved,” the ministry said, adding that it would now focus on “the final phase of the operation to liberate the Donbas area of ​​eastern Ukraine”.

Mr Putin himself has not commented on what the Kremlin calls a “special military operation” in Ukraine since March 18. Tatiana Stanovaya, founder of the France-based political analysis firm R. Politik, noted that many of what Ukraine proposed on Tuesday are a non-starter for Mr Putin, such as the idea that there would be a 15-year negotiation process on the status of Crimea – something that, according to Mr Putin, who annexed the Ukrainian peninsula in 2014, is non-negotiable.

She described the negotiations as a feint rather than a signal that Russia was ready to end the war. But she noted that — as was the case in the run-up to the invasion — senior Russian officials probably didn’t know what Mr Putin was really up to, leading to this week’s mixed reports.

“The problem with the Russian regime is that, again, no one understands what Putin wants,” said Ms Stanovaya. “As a result, we get this informational chaos.”