The Russians could have expected a warm welcome. Instead, the mayor called them “occupiers.” 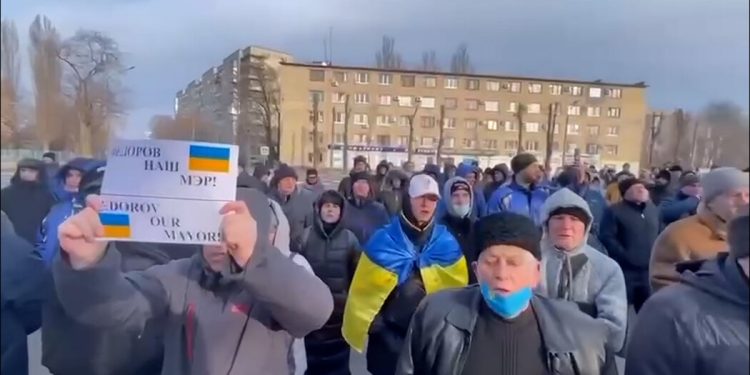 LVIV, Ukraine — Ivan Fyodorov, as his name suggests, is an ethnic Russian living in a city in southern Ukraine, where Russian is widely spoken and where cultural and family ties to the motherland are deep.

That seems to make Mr. Fyodorov, the mayor of Melitopol, the kind of person to welcome conquering Russian soldiers with open arms and flowers.

Instead, he labeled them “occupiers.”

On Friday night, those Russian soldiers threw a bag over Fyodorov’s head and dragged him from his government office, Ukrainian officials said. Footage from security cameras from Victory Square in Melitopol appears to show someone being escorted by soldiers from a government building, but The Times was unable to verify the identities of the people in the video.

Russia’s Tass news agency reported on Saturday that the prosecutor’s office in Luhansk, one of the escape zones recognized by Moscow, was preparing terrorism charges against Fyodorov, accusing him of raising money for the far-right group Right Sector.

On Saturday, hundreds of his townspeople poured into the streets in an expression of outrage and defiance, despite the presence of Russian troops.

“Bring back the mayor!” they shouted, said witnesses and showed videos. “Free the mayor!”

Almost as soon as people gathered, the Russians intervened to stop them, briefly holding a woman who, according to two witnesses and the woman’s Facebook account, had organized the demonstration.

Ukraine’s President Volodymyr Zelensky, who also defiantly and bravely hailed the Russian offensive, said the mayor’s kidnapping demonstrated the Kremlin’s lie of a Russian raid to save the country from a neo-Nazi clique in the capital. Kyiv.

“For years they lied to themselves that the people of Ukraine would wait for Russia to come,” he said. “They found no collaborators who would hand over the city and power to the invaders.”

Melitopol was heavily attacked on the first day of the war, February 24, and a few days later Russian soldiers entered. Since then, Mr. Fyodorov had openly encouraged the resistance, earning him public support and the ire of the occupying army.

The 33-year-old mayor, lanky, fit and photogenic, posted short live broadcasts on social media almost daily to keep residents of Melitopol informed about the situation in the city – which lies just north of Crimea, the peninsula that Russia annexed it in 2014. explosions could be heard from the poles behind him in the night as he tried to reassure residents that the city was functioning as normally as possible.

For example, on March 2, he noted that gunmen had opened fire on some protesters, warned residents away from clashes with the Russian soldiers during protests, and asked them to respect a 6 p.m. curfew. . “I find it unacceptable if civilians are being shot!” He wrote. In turn, Melitopol residents are asked not to provoke and to behave peacefully on the streets. Our job is to save your life and safety.”

On March 5, he announced that the city was in the process of restoring 31 private homes destroyed by Russian forces, and he repeatedly thanked local businesses for providing goods and services to help hundreds of displaced families.

The mayor made it clear all along that his government would not cooperate with the Russians, and he held the Ukrainian flag high over the city’s main square.

“We are not cooperating with the Russians in any way,” Fyodorov said in an interview with the BBC two days before he was taken away by the Russian soldiers. “They haven’t tried to help us, they can’t help us and we don’t want their help.”

He told residents where to buy milk and medicines, published updated lists of which pharmacies or ATMs were operating, and repeatedly warned that looters would be identified and punished. He urged them to continue paying their electricity bills as the money went toward salaries, and when public transportation stopped working, he asked residents to give free rides to medical staff.

Residents responded with an outpouring of gratitude, thanking him profusely for remaining at his post even after Russian forces took control of the city. “You are the best mayor!” read one enthusiastic response to his social media posts, while another wrote: “You are our hope!!”

Others were concerned for his health, as Mr. Fyodorov was oblivious to the cold and stood outside in only a light sweater and a down vest as the winter wind howled around him.

“Ivan Sergeevich, why don’t you take care of yourself?” wrote one woman, using his first name and patronymic, a polite form of address in the Russian-speaking world. “Are you standing without a coat in such cold weather? Please dress warmer!”

Born in Melitopol, a city of just over 150,000 inhabitants, Mr. Fyodorov has a degree in economics and management, and worked briefly for a medical imaging company before entering politics. He served on the city council for five years, from 2010 to 2015, and held various positions, including that of deputy mayor, before being elected mayor in December 2020.

Up to that point, although he had exceptional talents, in the eyes of the world he was just an anonymous local official.

Then came February 24 and his courageous action against the Russian occupiers. But then he was carried away in the hood and has not been seen or heard from since.

The episode is part of what Ukrainian officials are saying as a pattern of intimidation and repression by the Russian forces is becoming more and more brutal. It also illustrates a problem that Russia is likely to face even if it succeeds in forcing cities and towns into submission: widespread hatred, lingering unrest and possibly insurrection.

“The whole country saw that Melitopol did not surrender to the invaders,” he said. “Just as Kherson, Berdyansk and other cities where Russian troops managed to get in didn’t – temporarily managed to get in. And that will not change by pressuring mayors or kidnapping mayors.”

He added: “Do you hear, Moscow? If 2,000 people protest against the occupation in Melitopol, how many people in Moscow should be against the war?”

Mr Zelensky said he had brought up the mayor’s fate in talks with the leaders of Germany and France. At the United Nations Security Council, Ukraine’s ambassador also asked the Russians to release him.

“We expect them, the world leaders, to show how they can influence the situation,” said Mr. Zelensky. “How they can do something simple – liberate one person, a person who represents the whole Melitopol community, Ukrainians who do not give up.”

Mr Zelensky said what he called the mayor’s “kidnapping” was part of a broader shift in tactics. “They have moved into a new phase of terror, when they try to physically eliminate representatives of the legitimate local Ukrainian authorities,” he said.

According to statements by other regional officials on social media, a new mayor, Galina Danilchenko, a former member of the city council, was appointed by the Russians on Saturday. Ms. Danilchenko was immediately denounced in several posts as a “traitor”.

In a short video from Ukrainian news organizations, Ms. Danilchenko told her that her main task was to adapt the city to “a new reality in order to be able to live in a new way as soon as possible”. She suggested creating a sort of “people’s committee” to address critical issues for the city and the region.

Sergey Minko, who represents Melitopol in the Verkhovna Rada, the national parliament, accused the Russians of human rights violations. “The war is gaining momentum,” he wrote on Facebook, “The occupiers are increasingly defying the norms and principles of international law, especially humanitarian law.”

He described Mr. Fyodorov as a “great” mayor who managed to keep the city services running during the invasion.

As people took to the streets of Melitopol waving the blue and gold of the Ukrainian flag last weekend, Mr Fyodorov encouraged the demonstration. In his most recent post on Facebook, he thanked business leaders who helped the community at the time of struggle. “Together we will conquer everything!” he said.