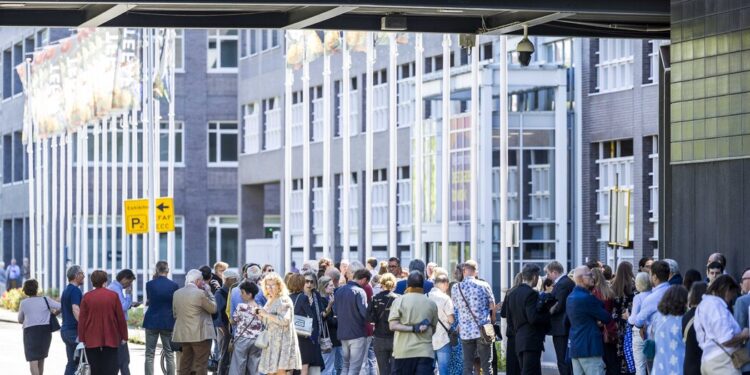 Marian Bies-de Wolf was working at TEFAF, the world’s foremost art and antiquities fair, on Tuesday morning when she saw a group of men running through the corridors.

It was a strange sight, she said in a telephone interview, given that “nobody runs at TEFAF”, which is held annually in Maastricht, the Netherlands.

Then things got weirder, Mrs. Bies-de Wolf said, as the men pulled out a heavy object and ‘started smashing’ a glass case in the next booth, which belonged to London jeweler Symbolic & Chase. Mrs. Bies-de Wolf couldn’t see if the men had taken anything, she said; after someone yelled that the thieves had a gun, she ran away.

A few hours after the robbery, it was still unclear what the thieves had stolen. The Dutch police say in a press release that four men have taken jewelry, but provide no further information. Two men from Belgium had been arrested and their possible involvement was being investigated, it added, while a search for other people involved in the theft was underway.

Wim Coenen, a spokesman for the Dutch police in Limburg, the region that occupies Maastricht, said in a telephone interview that he cannot comment further or indicate whether jewelry has been recovered.

A Symbolic & Chase spokesperson declined to comment on the incident.

TEFAF, also known as the European Fine Art Fair, is one of the world’s longest-running art fairs, specializing in fine arts and antiquities. The current edition, the 35th, is open on Saturdays and runs through Thursday.

TEFAF organizers made no mention of a robbery at the stock exchange on social media. In a message on Twitter they said the fair had been “temporarily evacuated due to an incident” and was “still open to visitors and exhibitors.”

Still, the events seemed more dramatic to witnesses. James Butterwick, a British dealer, said by phone he was only yards from the robbery when it happened. Mr Butterwick said he walked out of another cubicle and saw a man trying to break a glass case.

A Dutch trade fair visitor grabbed a vase of flowers and tried to confront the robbers, Mr Butterwick added, but one of the thieves pulled out what appeared to be a pistol, which he waved at the onlookers. “Things started to deteriorate a bit,” said Mr Butterwick.

mr. Butterwick, whose account was… confirmed by video footage of the robbery on social media, said the event lasted about 30 seconds. He didn’t see what the robbers were stealing, he added, but it appeared they were “looking for specific items.”

When he entered the exchange, Mr Butterwick said, “security personnel at the entrance were watching you” and checking bags, although no one had to walk through metal detectors or get knocked.

He added that he did not see any guards confront the robbers. TEFAF said in an email statement on Tuesday afternoon that “the exchange’s security teams worked quickly to disarm an assailant”, and that Dutch police were on the scene within minutes. “No one was injured in the incident,” the TEFAF statement added.

Hancocks did not respond to a request for an interview on Tuesday.