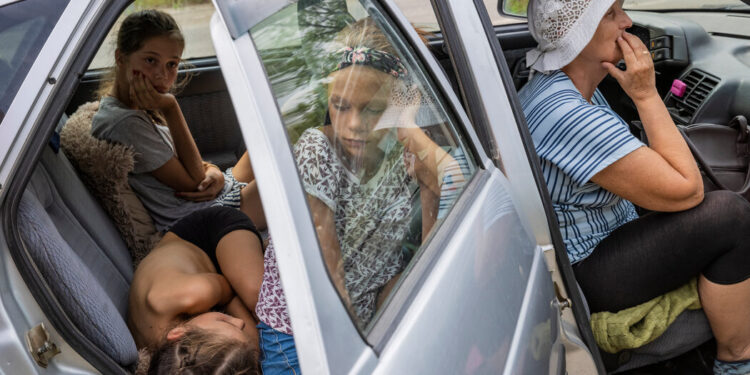 ZAPORIZHZHIA, Ukraine — The main front in the Russian military attack on Ukraine appears to have shifted precariously to the south of the country, looming catastrophe at Europe’s largest nuclear power plant and sparking a potential battle for a key regional capital seized by Russia at the start of its invasion.

The war initially focused on the north around the capital Kiev, then turned into a brutal brawl in the east that saw months of artillery duels costing thousands of lives on both sides. The war has entered a new and, it is hoped, decisive phase.

With fighting raging around the Zaporizhzhya nuclear power plant and the Russian-occupied city of Kherson, about 60 miles down the Dnipro River from the nuclear power plant, the south is now where both Russia and Ukraine concentrate their firepower — and their hopes of avoiding a stalemate that can take years.

Over the weekend, Russia used the area around the nuclear power plant, which it captured from Ukraine in March, as a staging area for attacks on Ukrainian positions. It unleashed a barrage of howitzer fire on the nearby Ukrainian city of Nikopol, local officials said.

The intensification of the fighting around the power plant, which has displaced residents in the area and raised the alarm about a radiation risk far beyond Ukraine, came as Russian forces in Kherson faced encirclement by the Ukrainian army.

The precarious position of Russian forces in Kherson, largely cut off from their main supply source after Ukraine destroyed the last of the four bridges over the Dnipro, has led to speculation about their fate.

According to some reports on Saturday, Russian commanders had already withdrawn from the city. A regional lawmaker, Serhiy Khlan, told Ukrainian television on Sunday that Russia is moving its command center in Kherson across the Dnipro to safer area on the eastern bank.

Senior Ukrainian military sources, however, said they had seen no evidence that Russian commanders were withdrawing. Analysts warned Ukrainian politicians have an interest in exaggerating Russia’s problems in order to boost morale and demoralize Russian troops.

But the Russian troops in Kherson are clearly in trouble now with their supply lines have been compromised. And Mr Khlan said the only way they could now safely reach the Russian-held territory on the east side of the Dnipro was by using pontoon bridges or crossing heavily damaged bridges on foot, without their equipment.

A large-scale offensive on Kherson, long threatened by Ukraine but so far limited to attacks on nearby villages and warnings to Russian troops stationed there, has made Moscow particularly eager to hold on to the Zaporizhzhya nuclear power plant on the Dnipro River in the northeast.

The aim is to pin down Ukrainian troops and prevent them from participating in the battle for Kherson, the first major city taken by Russia at the beginning of the war, and shells fired from the direction of the nuclear facility, have been invaded a small nearby town by Ukraine across a reservoir on the Dnipro.

In a Saturday evening address to his country, Ukrainian President Volodymyr Zelensky accused Moscow of “nuclear blackmail” and warned Russian soldiers at the Zaporizhzhya plant that they had become “a special target” for Ukraine’s special services and military.

But the Ukrainian military has said it has limited options. It worries that if its forces fire back at the Russians, they could hit the sprawling Zaporizhzhia facility, the first active nuclear power plant in a combat zone.

As fighting rages near active reactors and stored nuclear waste, the United States and the European Union have called for the creation of a demilitarized zone around the plant. But residents fearing a nuclear disaster are already rushing to leave the area and things are getting more dire, Dmytro Orlov, the exiled mayor of a nearby town, Enerhodar, said in an interview on Sunday.

“With every day the situation is getting worse,” he said.

Mr Orlov said he spoke to a foreman at the nuclear power plant on Sunday morning and was told that the whistle and thud of artillery fire could now be heard almost continuously. “They shoot day and night,” Mr. Orlov said. The foreman planned to evict his family from the area and was considering not returning, Mr Orlov said.

Since Russia captured the plant in March, the military has controlled the facility, while Ukrainian engineers have continued to operate it. Factory workers, Mr Orlov said, are “trying to get their wives and children out” while still working shifts at the nuclear site. An exodus of Ukrainian workers at the site would increase the risk that the reactors, even if not hit by missiles, would malfunction without trained personnel to watch over them.

Fighting has also intensified in Russian-occupied Enerhodar, about three miles from the nuclear power plant. Russian troops are firing rocket artillery from the outskirts of the city, Orlov said.

Energoatom, a state-owned company that operates Ukraine’s nuclear power plants, said in a statement on Sunday that one person had been killed by Russian shelling near Enerhodar and two workers at the nuclear plant had been injured.

Russia also continued to exert pressure around the city of Donetsk to the north, with proxy militias under the so-called Donetsk People’s Republic gnawing at Ukrainian positions along a front line that had been largely frozen since 2014, when Russia invaded eastern Ukraine for the first time and left Crimea. took.

Russia’s defense ministry said on Saturday that its forces had taken full control of Pisky, a village on the outskirts of Donetsk, but British defense intelligence said late Saturday that the village “is likely still controversial”.

Russia’s main goal over the past week, the British agency said, “has likely been to refocus units to bolster southern Ukraine.”

After months of fickle fighting and increasing gains by Russia in the Donetsk region and other parts of eastern Ukraine, Russia has now shifted its energies south, where large gains by Ukraine tightened Russia’s hold on Crimea, the peninsula on the Black River. Sea it captured would threaten in 2014. In what Ukraine warned was a foretaste of things to come for the Russian military, at least eight Russian warplanes were wrecked last week in a series of explosions at a Russian air base in Crimea.

During the night and Sunday morning, Russian howitzers fired at the Ukrainian city of Nikopol, Yevheny Yetushenko, the city’s Ukrainian military governor, said in a Telegram message.

Russia denies trying to get Ukrainian fire on the plant and says Ukraine alone is responsible for any damage to the facility, which consists of six separate nuclear reactors.

Former employees who fled say they saw Russian military equipment on the factory’s territory and that Russia has been assembling heavy weapons there for several weeks.

As conditions in and near the factory unraveled and the flight of civilians from the area accelerated, long lines of cars carrying fleeing civilians formed around Enerhodar over the weekend.

“Locals are leaving the city,” said a former engineer, who asked to be identified by only his first name, Oleksiy, for security reasons.

Engineers say that meter-thick reinforced concrete structures protect the reactors from even direct hits. However, international concern has grown that shelling could cause fires or other damage that would lead to a nuclear accident.

The six pressurized water reactors in the complex retain most of the radiation sources, reducing the risks. After pressurized water reactors failed at the Fukushima nuclear power plant in Japan in 2011, Ukraine upgraded the Zaporizhzhya site to allow for a shutdown even after the loss of cooling water from outside the containment structures, Dmytro Gortenko, a former plant engineer, said in a statement. interview.

Most Ukrainian workers do not flee but send their families away, said Oleksiy, who left in June. Enerhodar was built for factory workers in the Soviet period and had a pre-war population of about 50,000.