To choose Johnson’s successor, British Conservatives confront the void he leaves behind 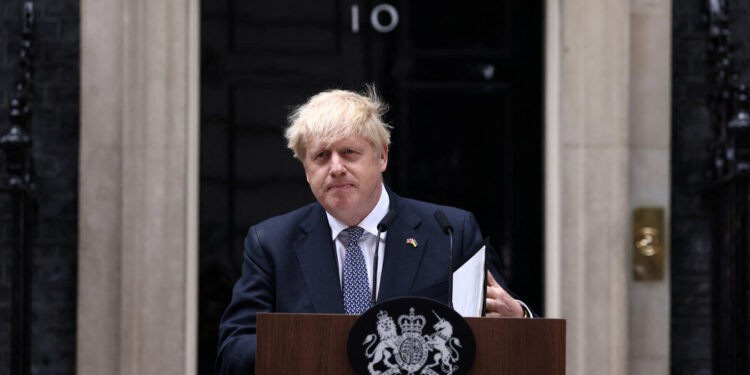 LONDON – Rarely free from scandal and never out of the headlines as Britain’s charismatic prime minister, Boris Johnson dominated British politics, overshadowing his rivals and reinventing his ruling Conservative party in his own compelling, polarizing image.

So for all the bitterness his leadership has brought, Mr Johnson’s departure leaves a yawning void in the stewardship of a country charting a difficult post-Brexit future and a poor economic background.

Despite Mr Johnson’s missteps, there is no prospect of an imminent general election under the British parliamentary system, leaving the ultimate choice of Britain’s next leader to the approximately 200,000 members of the Conservative Party.

The political crisis is far from over for Britons who are fed up with Johnson’s non-stop dramas, concerned about rising inflation and a potential recession, and unsure of where the next prime minister will lead them.

Whoever the party chooses for that role – the list of potential candidates is long and more diverse than in years past – the selection will mark a turning point as the country moves away from Johnson’s personality-driven politics.

“There is an opportunity for the Conservative Party to regain its footing with renewal and a honeymoon,” said Matthew Goodwin, a professor of politics at Kent University. “But the policy offerings are going to have to be very different — they’re going to have to offer a very different zeitgeist, and do it quickly, because the conservative brand is associated with Johnson and isn’t in a good place.”

However, he added that the Conservative Party has “always reinvented itself: it did it through Johnson, and now the contenders to succeed him must present a compelling argument as to why they are meeting this moment of reinvention.”

That means answering fundamental questions about the type of country they want to build, including many that have never been addressed due to the fallout from the 2016 Brexit vote and the pandemic.

Jill Rutter, a former civil servant and a senior fellow at the Institute for Government, a London-based research group, also predicted “a battle for direction”, citing debates about Brexit, taxes and the economy.

“The real question is, are they able to put a team back together in the long run without Boris Johnson?” she asked, adding that many of those in the more prominent positions in government were appointed primarily because of loyalty to their leader.

There will be no shortage of candidates: The number of lawmakers putting forth their name is likely to reach double digits. Some will run to raise their profile, and a series of votes among conservative lawmakers will narrow the real contenders to two.

One of them will then be chosen by members of the Conservative Party as the country’s next prime minister around the end of the summer, although questions arose on Thursday as to whether Johnson should remain as interim prime minister until then.

Key contenders to fill the position include Nadhim Zahawi, the recently appointed finance minister; Rishi Sunak, his predecessor; Liz Truss, the Secretary of State; Ben Wallace, the Secretary of Defense; and Jeremy Hunt, the former Secretary of Health and Foreign Affairs.

Ms Rutter said before Mr Johnson’s resignation there was thought that the Conservatives would likely have two years until an election, which would have given the party time to effectively resolve the unresolved aspects of Brexit, “the economy get back on track and restore some confidence” in the lead. Now those challenges are more urgent.

But after three years in Downing Street, Mr. An ideologically confused legacy, Johnson faces the challenge of successors to unite their fragile party.

Johnson won landslide elections in 2019 and vowed to “get Brexit done” after three years of stalemate over how — whether or — to proceed with Britain’s exit from the European Union.

With his populist pro-Brexit message, Mr Johnson managed to realign British politics by winning over millions of Labor Party voters in the former industrial regions of the so-called “red wall” to the north and center of Great Britain. He also pledged to “increase” prosperity in those areas, sometimes to the alarm of traditionally conservative voters in the South who thought they were going to lose.

Labor is still trying to recover in the northern seats where support for Brexit has been strong and where the left-wing previous leader, Jeremy Corbyn, has proved unpopular. The current leader, Keir Starmer, is widely regarded as capable but uncharismatic, and has made solid but unspectacular progress.

However, that could get off course if Mr. Starmer is fined by the police for breaking lockdown rules. Under such circumstances, he has promised to stop, something that would trigger a Labor leadership contest.

Yet the battle within the Conservative Party is the most urgent and important as it will determine the next prime minister.

While the Tories see themselves as committed to cutting taxes, the tax burden rose as public services came under pressure during the pandemic. Always a fan of major infrastructure projects, Mr Johnson often favored government spending and described himself as a “Brexity Hezza” – a reference to interventionist (but pro-European) conservative politician Michael Heseltine, who was killed in the 1980s and 1980s. 90.

The fall of Boris Johnson, explained

Unrest in Downing Street. British Prime Minister Boris Johnson said he would resign less than three years after his landslide election victory, following a string of scandals that have ensnared his government. This is what led to this:

The Pincher case. Mr Johnson’s demise is linked to the firing of Chris Pincher, a Conservative head whip deputy, after he admitted to groping two men. Outrage grew when it was revealed that Mr Johnson was aware of previous allegations of sexual misconduct against him when he appointed him to two government posts; the prime minister had previously denied knowledge of the allegations.

Still, the free-spending model abhors Brexit hardliners, who thought the party had lost its ideological strengths and saw Britain’s exit from the European Union as the prelude to a major reduction in the role of the state. , a concept nicknamed Singapore- on the Thames.

The candidates should outline their views on Britain’s post-Brexit trade plans, cultural issues and progressivism, immigration and the economy, he said, adding that there is no convincing set of ideas for now.

Tobias Ellwood, a senior conservative lawmaker and critic of Mr Johnson, said his colleagues were roughly divided into three groups: lawmakers from “red wall” seats who entered parliament in 2019; moderate, more internationalist lawmakers known as the One Nation group; and hard Brexit supporters.

“Whoever can sit in the middle and then get support from all three groups becomes the prime minister,” Mr Ellwood said.

Mr Lilley, who ran for party leadership in the 1990s, said that because the ultimate choice is made by party activists, who tend to be more ideological than the general public, “the far right of the two wins.”

In this case, he said, that would favor a candidate seeking to cut taxes and continue Mr Johnson’s tough policy of changing post-Brexit trade rules for Northern Ireland without an EU deal.

But Professor Goodwin said that to save their party’s fortune, candidates to become the next prime minister would need to produce a broader vision for modern Britain and a more thoughtful policy program than just offering tax cuts.

The Conservative Party, he added, “is in a very vulnerable position and this will either go well or very, very badly.”