Ukraine is tearing away in the Russian region, but the task is daunting 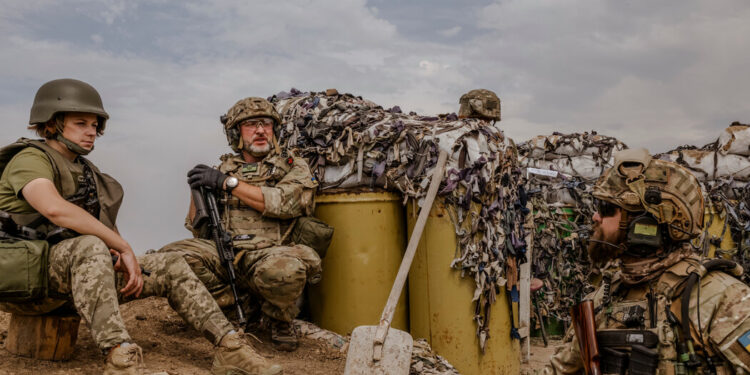 But in the sunlit fields along the western border of the Kherson region, the Ukrainian fighters who would be called upon to deliver the knockout blow to any successful attempt to retake territory remain pinned down in their trenches. The cuts to supply lines have not yet eroded Moscow’s overwhelming advantage in artillery, ammunition and heavy weapons, making it difficult, if not impossible, for Ukrainian troops to penetrate without incurring huge losses.

“Without a doubt we need a counter-offensive; I sincerely believe it will come,” said a 33-year-old lieutenant called Ada, who commands a trench outpost in the Mykolaiv region, a few miles from the Russian lines in Kherson.

Ukrainians have acutely felt the loss of the Kherson region, with its vast black-earth farmlands known for producing the country’s tastiest tomatoes and watermelons. Just about the entire region was taken in the early weeks of the war after Russian troops struck from their bases in the Russian-occupied Crimean peninsula. Since then, Ukraine’s leaders have been plotting to take it back.

But this poses major challenges.

Russia maintains overwhelming superiority in troop numbers and ammunition, and in recent weeks the Kremlin has moved to bolster its army in the region, shifting resources there from fighting in the eastern Donbas. Even if the Ukrainian military can squeeze Russian troops out of rural farmlands, they will most likely have to wage a vicious urban battle for the city of Kherson, which could lead to massive losses of life and property.

Ukraine also operates on a shortened timeline. The Kremlin plans to hold a referendum on Russia’s absorption of Kherson in mid-September, and to disrupt this, Ukraine’s president, Volodymyr Zelensky, and his generals would have to take some sort of significant offensive action soon, experts said.

“The real limitations that the Ukrainians face is that it is very difficult to get ahead in the combat environment today,” said Phillips P. O’Brien, a professor of strategic studies at the University of St Andrews in Scotland. “Unless you have full control of the airspace and can clear the area for your troops, those advancing are in real danger of being eaten away.”

But Russia’s position in Kherson is also precarious, said Professor O’Brien and others.

Although Ukrainian forces have not advanced in Kherson for weeks, their artillery campaign appears to be paying off, slowing the flow of Russian weapons, equipment and troops into the region, Ukrainian officials say. Using highly accurate weapons, such as the American-supplied High Mobility Artillery Rocket System, or HIMARS, Ukrainian forces stormed the three bridges over the vast Dnipro River that connect thousands of Russian troops to their supply lines in occupied Ukrainian territory east of the river .

The attacks have rendered these bridges “unusable,” said Nataliya Gumenyuk, the spokeswoman for the Ukrainian army’s southern command. Over the weekend, Ukrainian troops launched another attack on the Antonivsky Bridge, the main supply artery to the city of Kherson.

The question now is whether the pressure on the supply lines will be enough to cripple the combat capability of Russian forces and perhaps force the Kremlin to order at least part of the force to withdraw from Kherson and fall back across the river. Several Ukrainian officials in the region said this week that some Russian field commanders had already begun moving their headquarters east of the river, although two senior Ukrainian military officials said there was no evidence of this.

Along with additional troops, Russia may have already moved large amounts of equipment and ammunition into the region, allowing it to continue fighting for some time even with supply lines severely disabled, said Ben Barry, a senior fellow at the International Institute for Strategic Studies. , a research group based in London.

And even if the bridges were destroyed, Russia would still have options to resupply.

“The prospect of being isolated from the rest of their armed forces will do nothing for the morale of the Russian forces defending the Kherson Oblast,” said Mr. barry. “But on the other hand, Russia has a lot of military bridges, it has quite a few ferries, it has river boats.”

In the long run, pressure from Ukraine could turn Russia’s precarious position into an untenable one, said Michael Kofman, director of Russian studies at CNA, a research institute in Arlington, Virginia. But this could take months, not weeks, he said, and could deprive the Ukrainian military of the resources it would need to pursue other campaigns.

“The position the Russian army has taken in Kherson is the least defensible of the areas they have occupied,” said Mr Kofman. “Once those bridges are gone and once the rail bridge link to Kherson is gone, they will have a very hard time getting ammunition there. They will have to withdraw to positions that are at best outside the city.”

Looking east toward Russian lines last week from behind a sandbag-fortified trench position just across the border into the Kherson region, the task of pushing back Russian forces seemed a daunting task.

Each day, a withering barrage of Russian attacks inevitably kills a handful of troops there and injures many more, said Ada, the local commander. A near miss by a grad rocket the day before charred the grass around a hollowed-out position, and in the nearby field, the tail section of another rocket was visible sticking out of the ground. Every now and then a low-decibel thud echoed across the plains.

It’s the same across the 50-mile Kherson Front, which runs northeast-southwest through farmland and once-tidy villages now largely blown apart and abandoned.

Ukraine’s commanders and military analysts say any attack will require far more troops and equipment than Ukraine currently has in the Kherson theater as both armies fight on different fronts.

In the east of the Luhansk region, Ukrainian officials claimed they hit a base housing mercenaries from the Wagner Group, a private military organization with close ties to President Vladimir V. Putin of Russia. There was no immediate comment from authorities in Russia. In the southeast, shelling at the Zaporizhzhya nuclear power plant hit a fire station responding to fires in the sprawling facility, officials said Monday, raising concerns about nuclear safety in the area.

In a hotel a safe distance from the front lines in the Mykolaiv region, but very far from home, refugees from the Kherson region have grown increasingly anxious.

Natalya Larionovskaya, who had fled with her children and parents in April, said her husband, who stayed behind, told her that Russian artillery and tank units had taken up positions in her village and that it had burned down 10 square meters from the surrounding fields.

Her husband has become pessimistic about Ukraine’s chances of retaking the region and liberating their home, but Ms. Larionovskaya has tried to cheer him up.

“I tell him, ‘Don’t worry, nobody will let anyone down,'” she said.

Major General Dmytro Marchenko, the commander of Ukraine’s armed forces in the region, recently acknowledged bubbling frustrations over the slow pace of Ukraine’s efforts to retake Kherson, but said he could not provide a timetable for the start of major offensive actions.

“I want to tell the people of Kherson to have a little patience – that it won’t take as long as everyone expects,” General Marchenko said in an interview with RBK-Ukraine last week. “We have not forgotten them. No one will abandon our people, and we will come and help them. But they have to wait a little longer.”