Ukraine recognizes that the ‘spirit of Kiev’ is a myth. 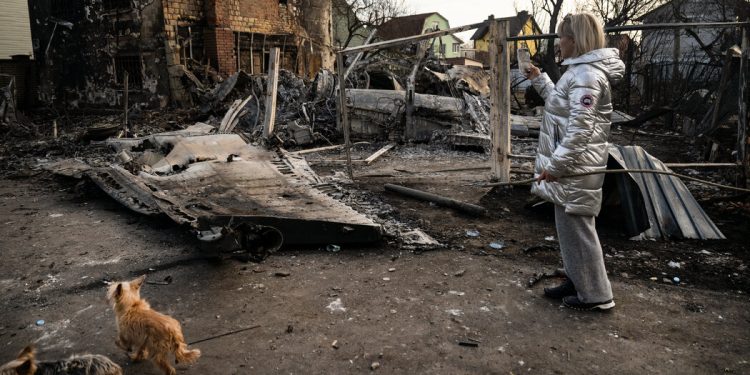 “The ghost of Kiev is a superhero legend, whose character was created by Ukrainians!” Writing on Facebook on Saturday, the Ukrainian Air Force Command dispelled a months-long rumor – fueled by the Ukrainian authorities themselves – that had strengthened resistance to the Russian invasion.

The Ukrainian statement came after some news outlets, including the Times of London, identified the Ghost of Kiev as Major Stepan Tarabalka, a real 29-year-old who died in a dogfight in March. The claim reverberated across social media and tabloid publications in Ukraine and the West, appearing to confirm that the heroic fighter’s story was real.

Instead, it has proved to be one of the most successful propaganda tools in an information war that Ukraine has sometimes fought as fiercely as it has on the battlefield.

It was just a day after the start of the Russian invasion that Ukrainian media began reporting that an unknown pilot of a MIG-29 fighter jet had shot down six enemy planes in 30 hours. Memes and Illustrations started to circulate online with the hashtag #ghostofkyiv, amassing hundreds of millions of views.

Even a former president of Ukraine, Petro O. Poroshenko, tweeted a photo of a pilot he believes was the Ghost of Kiev and who had “six victories over Russian pilots!”

“With such powerful defenders, Ukraine will definitely win!” Mr Poroshenko wrote. (The photo, it turned out, was from a 2019 Twitter post from the Ukrainian Defense Ministry.)

The Ukrainian government also participated. It continued on February 27th Twitter throughout the story and photo, the unknown pilot called “a nightmare for invading Russian planes.” It posted a video praising the pilot, including a clip of a combat flight simulator.

Around the same time, when the Ukrainian Defense Ministry announced on Facebook that dozens of fired military pilots were returning to the Air Force, it alluded to the fascination with the anonymous pilot: “Who knows, maybe one of them is the air avenger on the MIG-29. ”

The stories spread and overlapped. After reports in early March that the Ghost of Kiev had been shot down, Ihor Mosiychuk, a former Ukrainian lawmaker, reported that the pilot survived, returned to his base, took off in another jet and shot down another enemy plane.

“The Spirit Lives!” he wrote on Facebook. The Kiev Post reported that he had destroyed as many as 49 aircraft.

Skepticism spread in some quarters. But the legend only grew. Artists produced NFTs, or non-replaceable tokens, with the image of the pilot. Blue and Gold “Ghost of Kiev” leaflets and illustrations distributed online.

Various publications on Friday identified the pilot as Mr. Tarabalka, an aviator who was killed in combat on March 13 and was posthumously awarded the military decoration “Hero of Ukraine”. The Times of London also quoted Ukrainian sources as saying the pilot’s helmet and goggles were expected to go on sale at an auction in London.

The next day, the Air Force Command of the Ukrainian Armed Forces disproved the claims. “Ukraine’s hero Stepan Tarabalka is NOT a ‘Ghost of Kiev’ and he did NOT shoot down 40 planes,” it wrote on Facebook. But they still worked to perpetuate the myth.

“The #GhostOfKyiv is alive,” the Air Force wrote on Twitter. “It embodies the collective spirit of the highly qualified pilots of the Tactical Aviation Brigade who are successfully defending #Kyiv and the region.”

For many Ukrainians, that was all that mattered.

“He IS a legend,” Lesia Vasylenko, a Ukrainian lawmaker, wrote on Twitter, “He cannot be killed – he is a ghost.”