Ukraine says its troops hit a Russian ammunition depot in the Kherson region. 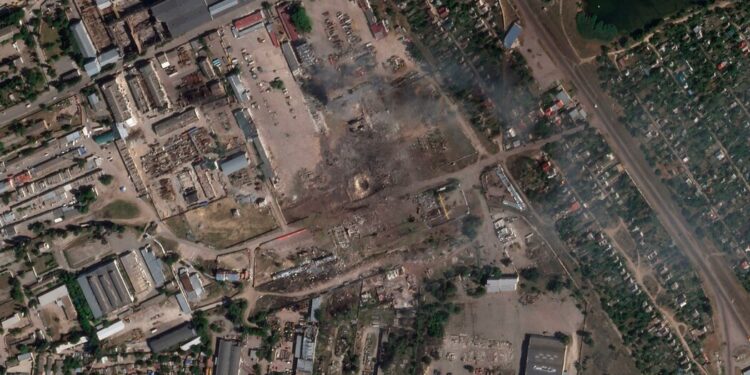 Ukrainian forces fighting to retake territory in the south of the country said they had blown up a Russian munitions depot in the Kherson region overnight, the latest in a series of rocket attacks claimed by Kiev on Russian military infrastructure. .

Officials loyal to the Moscow government said the strike, in Nova Kakhovka, instead hit a warehouse containing saltpeter — sometimes used to make fertilizer or gunpowder — resulting in a major explosion that Russia said had damaged residential buildings, a hospital, a market and a humanitarian aid center. At least seven people were killed and dozens more injured, Russia’s state news agency Tass reported, citing a local official.

The competing claims could not be independently verified. Satellite images released Tuesday morning by Planet Labs PBC, a US satellite imaging company, showed a remarkable impact crater where a rocket appears to have struck, surrounded by destroyed buildings and warehouses.

Ukraine, which is trying to thin out Russian forces, has carried out limited strikes against Russian targets in the Kherson region, while announcing a broader counter-offensive imminent. On Sunday, the country’s deputy prime minister called on citizens to evacuate urgently. Increased Ukrainian missile strikes in recent days have forced Russian forces to focus on defensive positions, the Institute for the Study of War, a US think tank, said citing the Ukrainian military.

Vladimir Leontyev, the head of the Russian-installed military-civilian administration of the Kakhovka District in the Kherson region, said the weapon used in Nova Kakhovka was a High Mobility Artillery Rocket System, or HIMARS. Ukraine did not say which weapon was used in the attack.

The truck-mounted multiple rocket launchers are the most advanced weapons delivered to Ukraine by the United States to date. Both US and Ukrainian officials have said the weapons are already having a remarkable impact on the battlefield, allowing Ukrainian forces to destroy Russian ammunition depots and command centers.

At least 12 people were injured by Russian shelling in the southern city of Mykolaiv on Tuesday morning, Vitaliy Kim, the regional military governor, said.

Further east, in Donetsk province, where Moscow has turned its attention and where it is making increasing profits, the body of a 9-year-old boy was recovered from the rubble of an apartment building hit late Saturday in the city of Chasiv Yar. . , Ukrainian officials said on Tuesday. A total of 45 people were killed in the attack, Ukrainian rescue officials said Tuesday, making it one of the deadliest in recent weeks.

According to military analysts, Russia has escalated its attacks on civilians in the province in recent days, but has paused its operation to capture more territory there.

Donetsk and neighboring Luhansk province make up the heavily industrial Donbas region, which has become the main theater of the war since Moscow’s failure to capture the capital early in the conflict. Russian troops have taken Luhansk this month after weeks of fighting.

Donetsk military governor Pavlo Kyrylenko said on Telegram’s social messaging app on Tuesday that 602 civilians had been killed there since the invasion began in February and more than 1,500 had been injured.