Ukraine’s mammoth task: helping millions whose homes are in ruins or in Russia’s hands 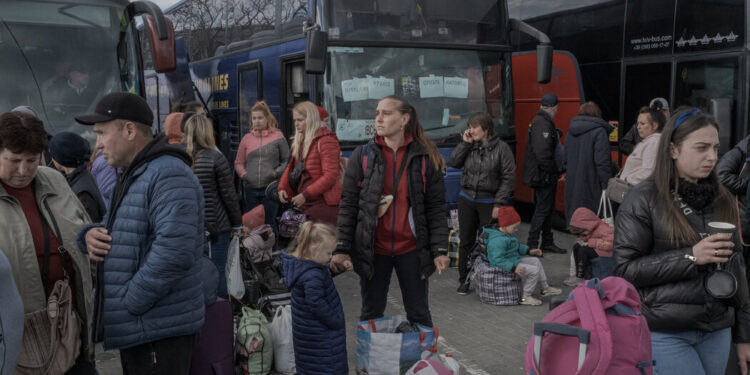 When she fled her home in eastern Ukraine, Hanna Obuzhevanna, 71, gave her keys to her neighbor to water the blooming cyclamen on her balcony, assuming she would be back in a few weeks.

Three months later, she is still sleeping with her two sons in a room of an old church building in the city of Pavlograd, in central Ukraine. At home, a rocket destroyed her bedroom, soldiers destroyed her piano and the city is in Russian hands.

“I’m in someone else’s damp room. I’m wearing someone else’s sweater, the dishes aren’t mine, I’m sleeping on a bed that isn’t mine. Everything is strange outside the window. I miss my house so much,” she says. “But if there are Russian occupiers, I will never go back.”

Ms. Obuzhevanna and her family are among more than 10 million Ukrainians displaced from their homes — about a third of the population whose cities are now cratered ruins, occupied territory or in the sights of artillery.

About five million Ukrainian refugees have fled west across borders to the European Union, a migration across the continent unprecedented since World War II, but another humanitarian crisis has changed life in Ukraine: that of the millions of people who, like Mrs. Obuzhevanna, have taken refuge in other parts of the country.

Ukraine faces a huge challenge to help them.

The country struggles to fend off a formidable aggressor, who has just taken one province and is on his way to conquer another, undaunted by heavy casualties on both sides. It is trying to cope with a devastating economic crisis, with the cost of reconstruction alone estimated at $750 billion. And all the while, while the outcome of the war is unknown, Ukraine must somehow help the displaced millions either return to their homes or find new ones from scratch.

Most of the internally displaced persons now come from the east of the country, especially the Donbas region, where the Russian offensive has already robbed the country of about half of its pre-war population. Russia on Wednesday continued shelling towns in Donetsk province, including Sloviansk and Bakhmut, campaign to conquer the rest of the Donbas.

With that advance, more people are being forced out of their homes every day simply to survive. Ukraine’s regional military government said at least five civilians have been killed in the past 24 hours as a result of Russian bombing raids in the province.

With no diplomatic solution to the war in sight, despair is growing among the displaced. With each passing day, as more and more cities are reduced to the conditions of Mariupol, the southern city pulverized by weeks of Russian siege, many become increasingly concerned that there may be no place to turn back at all.

Fighting has been going on for years over part of the area in the east where the war is taking place. In 2014, pro-Kremlin separatists proclaimed two breakaway republics there.

Now many people displaced by the invasion fear that their country will never come under Ukrainian control again, and are divided over what they would do in that scenario. Some say they will still find a way to return. Others insist that they would rather lose everything than live under Russian control.

Most realize that, even if Ukraine recaptures their hometown, there could be little but dust and rubble from the Russian military’s scorched earth tactics – which have seen houses, water pipes and power plants demolished.

Citizens from towns and villages in eastern Ukraine are getting on trains and buses, fleeing the relative safety of the west and the capital Kiev. Some have left in humanitarian convoys, navigating treacherous roads under threat of gunfire and shelling. Others have left on foot, literally running for their lives.

“There are no schools, hospitals, businesses now,” said Vladislav Obuzhevannyi, Ms. Obuzhevanna, who lived in Rubizhne, a city occupied by Russia along with the Luhansk province. “Now it’s a dead city.”

His office was destroyed by Russian artillery and he said he hoped his apartment would also be destroyed so that it could not fall into enemy hands.

Mr. Obuzhevannyi is haunted by memories of breakfast in the bright, warm flat.

“I’d better forget so that the memories don’t hurt me,” he said. “It hurts to remember how much love I put into it.”

With a paltry government subsidy, Mr. Obuzhevannyi and his mother could not afford to rent a house. They call the old church building where they reside the “chicken coop,” but the building, donated to them by a local priest, was the only free option for them.

Shelters have been created in public buildings. Gyms and college dorms have been converted and some modular homes have been set up. The majority of internally displaced persons, like refugees abroad, are women and children, and many face shortages of food, water and basic necessities, according to the United Nations. A shortage of international aid has put further strain on local resources, UN experts say.

“The state was not ready for such a volume of displaced persons in many areas,” Vitaly Muzychenko, the deputy minister of social policy for Ukraine, said at a news conference this week.

Many Ukrainians were also not ready and could only take the bare essentials with them when they fled.

When the war started, some packed only their documents and a handful of belongings, hoping to be back soon. Parents on the front lines unable to leave because of military jobs or essential industries sent their unaccompanied children west, under the care of their teachers. Others simply ran as bombs fell around them, with nothing but the clothes on their backs.

In eastern Ukraine, the uncertainty of war was already painfully familiar in communities where conflict between pro-Russian troops and Ukrainian forces has been raging for eight years.

Ukrainians could never be sure when the violence would break out, how long it would last and when they would return if they had to flee. Some instructed relatives or friends to feed the pets they had left behind. Some left tools out to begin repairs as soon as they returned.

But this time, many fear that they will never do that, and have begun to adapt to this new reality.

Oksana Zelinska, 40, who was the director of a kindergarten in Kherson, a southern city now occupied by Russian troops, fled her home in April with her children, a colleague and her colleague’s children. Her husband stayed behind and she would like to return, but for now she is staying in the west for her children.

Ms. Zelinska has started volunteering in the communal kitchen she used when she first arrived, peeling potatoes and preparing food for the dozens of people who come in every day. “When we got here, I had to do something,” she said. “It was hard and I didn’t want to get depressed.”

In Pavlograd, Mrs. Obuzhevanna cycling home out of town and taking care of her tidy vegetable garden there, surrounded by fruit trees. But recently she found a square of unkempt land near her “chicken coop” of a house in the church.

Now she has managed to plant tomatoes, cucumber, potatoes, onions and zucchini. The memory of her old routine “destroys me a bit with sadness,” she said. But, she said, “I’m slowly getting used to it.”