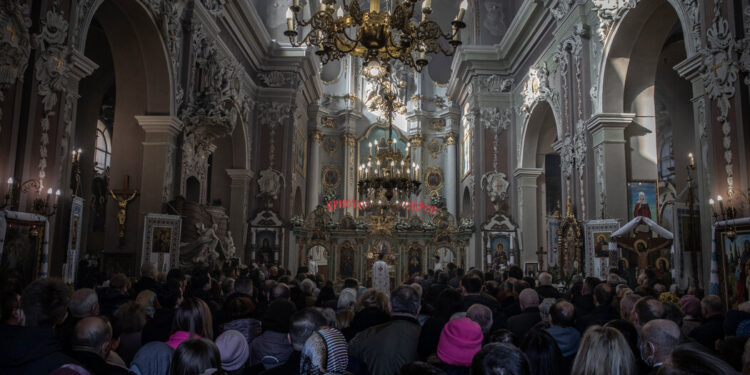 The leaders of the central branch of the Orthodox Church in Ukraine have made a formal break with the hierarchy in Moscow, deepening the schism in a church already divided before the Russian invasion of Ukraine.

The Council of the Ukrainian Orthodox Church said it disagreed with the view that Patriarch Kirill I, the leader of the Moscow Patriarchate of the Russian Orthodox Church, had gone to war, according to a statement posted Friday on the Facebook page. page of the Council was posted.

Patriarch Kirill has repeatedly blessed the Russian armed forces invading Ukraine. Because he is the spiritual leader of the Church in both countries, many of the Ukrainians who die under the attack are his followers. He has also avoided condemning attacks on civilians.

Until now, the Ukrainian Orthodox Church had formally maintained its allegiance to Moscow.

The church has been under the wing of the Moscow Patriarchate for centuries, and its departure will significantly reduce the size of the Patriarch’s flock, as Ukrainians attend church in greater numbers than Russians.

But it’s unclear how many of Ukraine’s bishops and parishes will follow the council’s advice, or how many will try to adhere to Moscow, wrote Sergei Chapnin, a Russian religious scholar who has been in the United States since the invasion. on Facebook.

Vladimir Legoyda, the spokesman for the Russian Orthodox Church, declined to comment on the split, writing on his Telegram channel that the church had not received any formal notification from the Ukrainian Church. He accused “external forces” of attempting to destroy the unity of the Church.

Before Friday’s announcement, about half of the 45 dioceses of the Ukrainian Orthodox Church had already stopped mentioning Patriarch Kirill in their prayer services, the first step towards a formal split. Hundreds of Orthodox priests in Ukraine recently signed an open letter demanding that Patriarch Kirill appear before a religious tribunal over the war.

Disputes within the Church, which can last for centuries, revolve around complex issues of doctrine and authority. The Church in Ukraine has struggled with internal divisions since 2014, the year Russia annexed Crimea and unleashed a separatist war in eastern Ukraine.

Each of the 15 branches of the Orthodox Church enjoys considerable sovereignty, with the foremost spiritual guide to Eastern Orthodoxy, the Ecumenical Patriarch of Constantinople, having far less authority than, say, the Pope.

In 2019, however, Patriarch Bartholomew, the global leader for Eastern Orthodoxy, granted independence, dubbed “autocephaly,” to a previously unapproved church in Ukraine. More than half of Ukrainian parishes rejected the decision and remained under Moscow’s jurisdiction.

Persistent bitterness dividing the two Ukrainian branches continues, but the council’s new announcement suggested they might be working together.