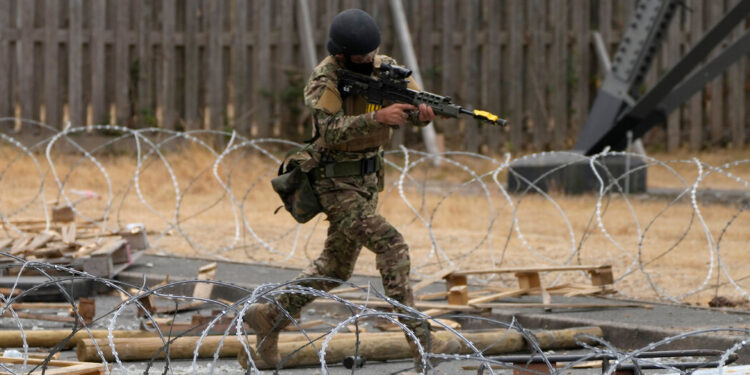 KENT, England – A commander barked orders at Ukrainian recruits. A group of new soldiers in fatigues marched through a street littered with grenade canisters, burning debris and overturned cars. An injured man was taken out on a stretcher, moaning.

The battle that unfolded Monday was a training exercise, led by a British commander who was flanked by a Ukrainian translator as he led recruits through a fake village in southeastern England. It was designed to resemble the scenes of destruction that took place on Ukraine’s front lines over a thousand miles away.

“This training in urban areas is exactly what we need,” said Nick, a 25-year-old Ukrainian recruit who only offered a nickname for fear of Russian reprisals against his family.

Nick participates in a British-led program to provide military training to tens of thousands of Ukrainian army recruits and staffers, in an effort to bolster local resistance to the Russian invasion.

The initiative, announced in June by Prime Minister Boris Johnson, started with more than a thousand British soldiers from the 11th Security Force Assistance Brigade, which specializes in training foreign military personnel. About 2,000 recruits have completed the program and have returned to Ukraine, British officials said.

Other countries — including Canada, Denmark, Finland, the Netherlands, New Zealand and Sweden — have pledged to join the effort, which is basically a revamped version of Operation Unifier, an international training initiative that began in 2015. from the United States, Great Britain, Canada, Denmark, Poland and Sweden, among others, trained about 35,000 Ukrainians.

The Ukrainians gathered on Monday were part of a group of several hundred flown in by British military aircraft and taken to an army base in Kent, a windswept corner of south-east England where British forces had previously prepared for operations in northern England. Ireland. It is one of four locations where British trainers provide three-week courses on combat tactics, medical and weapons training and the law of war.

While the new effort focuses on basic infantry training for civilian recruits, Britain has also trained hundreds of Ukrainian soldiers in England in the use of more complex weapons, such as the multiple missile systems it has supplied to the Kiev government.

“We are at a stage in the war where we need to reclaim our cities from the occupying forces,” said a 34-year-old trainee named Snizhana. “The British officers who train us have been through this warfare in Iraq and Afghanistan – so now it’s very useful to us.”

The trainers said they were impressed with the morale of the recruits, who ranged in age from 18 to 50. Major Craig Hutton, a Scottish commander who oversees the training, said he had “never seen people so willing, so enthusiastic to fight”.

“It’s an absolute cross-section of Ukrainian society that has come together because they pose a serious threat to their homeland,” he said.

The training drills were planned in conjunction with Ukrainian military and intelligence officials, he added, and were designed to recreate scenes they might encounter on the battlefield at home — right down to the spray-painted badges on vehicles.

Many of the Ukrainians who took part in the exercise were given variants of the AK-47 weapons they were likely to use on the front lines. Others carried anti-tank weapons called NLAWs, thousands of which Britain has donated to help Ukrainians destroy Russian tanks and armored vehicles.

“Nobody wants to die,” said an intern named Zakhar. Before enlisting as a civil engineer three weeks ago, he said he was motivated to join his brother in the army and avenge his best friend, who was killed in battle.

“I want my children and grandchildren to live in a free and thriving, independent country,” he said.