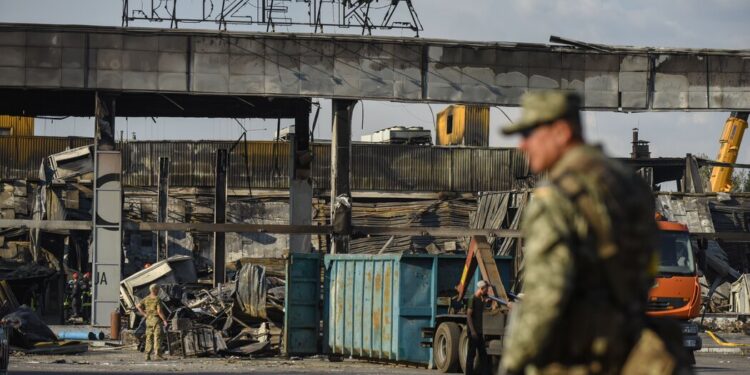 Speaking to the United Nations Security Council on Tuesday, President Volodymyr Zelensky called on the organization to declare Russia a terrorist state and send investigators to inspect a rocket attack on a shopping center in the city of Kremenchuk the day before.

The Security Council had called an emergency meeting at Ukraine’s request to discuss the attack, which sparked a massive fire that left 18 people dead and at least 30 injured. Both numbers are expected to rise as many people are still missing.

“Who of you disagrees that this is not terrorism?” Mr. Zelensky asked, speaking via video during his second appearance before the council since the conflict began. “The Russian state has become a terrorist.”

He also said that Moscow had forfeited its right to be a permanent member of the Security Council and that it should also be deprived of any representation in the UN General Assembly.

Mr Zelensky read out the names of several war victims, including a three-month-old boy who, he said, was injured in a Russian attack and was hospitalized in intensive care. He asked for a minute of silence to remember Ukraine’s dead. All councilors, including the Russian delegation, rose and observed a minute of silence.

But then the council returned to back and forth divisions, the kind of exchanges that have failed to produce legally binding resolutions on Russia’s war against Ukraine.

A statement condemning the attack on the mall would require the approval of all 15 members of the council – and it is unlikely that Russia and its allies will sign there. In the absence of unity, US and European members, along with Ukraine, made their own statement and “strongly condemned the intensification of Russian missile strikes on Ukrainian territory”.

US Deputy Ambassador to the United Nations Richard Mills said the attack is in line with Russia’s “cruel pattern” of attacking civilians and destroying civilian infrastructure. He said evidence of war crimes was “increasing and cannot be ignored”.

Russia’s deputy UN ambassador, Dmitry Polyanskiy, denied that Russia had hit the mall and offered another explanation for the damage there, without providing any evidence. He suggested that precision weapons were aimed at a hanger near the mall that stored weapons shipped from the United States and Europe, and that the ensuing fire had simply spread to the mall.

Mr Polyanskiy also called his colleagues on the council “ridiculous” and “unconvincing” for “promoting Ukrainian propaganda”. He said Russia’s aim was to prevent Ukrainian troops from shelling the Donbas region.