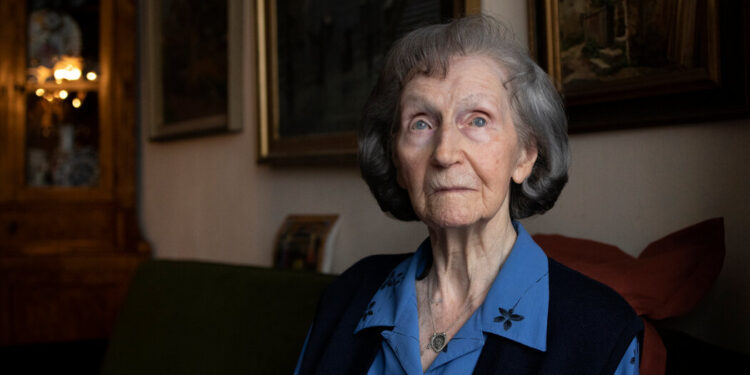 Zofia Posmysz, who endured three years in concentration camps for her involvement in the Polish resistance to the Nazi occupation in World War II, then rose to fame for her work on the Holocaust as a journalist, novelist, playwright and screenwriter, died on August 8 . in Oswiecim, Poland. She was 98.

Her death, in the city where the remains of the Auschwitz concentration camp have been preserved as a reminder of the human capacity for unfathomable evil, was announced by the Auschwitz-Birkenau Memorial and Museum.

Mrs. Posmysz (pronounced POCE-mish) was born on August 23, 1923 in Krakow, Poland, to a Roman Catholic family. She was arrested by the Gestapo in May 1942 for associating with fellow students at an underground university who were handing out anti-Nazi pamphlets. She was taken to Auschwitz, where about 1.1 million people, a vast majority of them Jews, would perish.

She survived the violence in Auschwitz but was later assigned to work in the camp’s kitchen and warehouse. In mid-January 1945 she was transferred to Ravensbrück concentration camp and its offshoot Neustadt Glewe, from where she was liberated on May 2.

She walked back to Krakow with 20 other women and lived for many years in Warsaw, where she had an older sister.

Her writing career began when she was hired as a newspaper reporter and editor. She didn’t look for a byline for her first article, an account of the war crimes trials in Nuremberg, Germany. Instead, she wrote off with her Auschwitz identification number: 7566.

Mrs. Posmysz started writing for Polish radio in the early 1950s. While on assignment in Paris in 1959, she walked in the Place de la Concorde among tourists, many of whom spoke German.

“Suddenly someone appeared behind me,” she recalls long after on “Stories From the Eastern West,” a Polish podcast. “It was my overseer’s voice. All the while she lives a peaceful life in Paris.” She soon realized that the woman was not, in fact, her former guard at Auschwitz, but at the time “she just wouldn’t leave me alone,” she recalled.

It spawned her most famous work, ‘The Passenger in Cabin 45’, later titled ‘The Passenger’. It was released as a radio play in 1959, a novel published in 1962 and translated into 15 languages, a film, in which she worked on the script with the director, Andrzej Munk, and an opera.

The opera was composed by Polish-born Mieczyslaw Weinberg, who was Jewish and had lost his parents and a sister in the Holocaust, while the libretto was written by Alexander Medvedev, a Russian. It was conceived in the Soviet Union and completed in 1968; the Russian composer Dmitri Shostakovich praised the opera, but it was banned by the Soviets.

The opera reverses the moment in Paris when Mrs. Posmysz thought she had run into her former Auschwitz guard. It is about Liese, a middle-aged German woman who is on board an ocean liner bound for Brazil in the early 1960s, together with her husband, who is about to take up a diplomatic position there. Liese is stunned to see a fellow passenger staying in cabin 45. She thinks it may be Marta, who was a prisoner in Auschwitz when Liese was her guard.

It premiered at an Austrian music festival in 2010 and was performed in 2014 by the Houston Grand Opera at the Park Avenue Armory in Manhattan as part of the Lincoln Center Festival. Ms Posmysz sat in the audience and received a prolonged ovation when she was introduced.

“Weinberg’s music boldly shifts from portraying the lives of the wealthy Germans aboard the ship to the horrors of the death camp,” wrote Anthony Tommasini in his review for DailyExpertNews. “The hero of the evening and, really, of the opera, was Mrs. Posmysz, whose novel was drawn from her own experiences in Auschwitz.”

A list of the survivors of Mrs. Posmysz was not immediately available. She was married. Her father was shot dead by Germans during the war, who outlived her mother. She also had an older sister.

Ms. Posmysz was one of the former Auschwitz inmates who welcomed German-born Pope Benedict XVI during his visit there in 2006.

In January 2020, the survivors attended a ceremony in the former extermination camp for the 75th anniversary of the liberation. The event took place amid growing concerns about a resurgence of anti-Semitism in the United States and Europe, as well as increasing bitterness between Russia and Poland over who bore much of the responsibility for the German invasion of Poland that started World War II. .

Ms. Posmysz was unable to attend the ceremony, but she was aware of attacks on Polish leaders by Russian President Vladimir V. Putin.

“I fear that over time it will become easier to twist history,” she told The Times at the time. “I can never say it will never happen again because if you look at some leaders today, those dangerous ambitions, pride and feeling of being better than others are still in play. Who knows where they could lead? ”