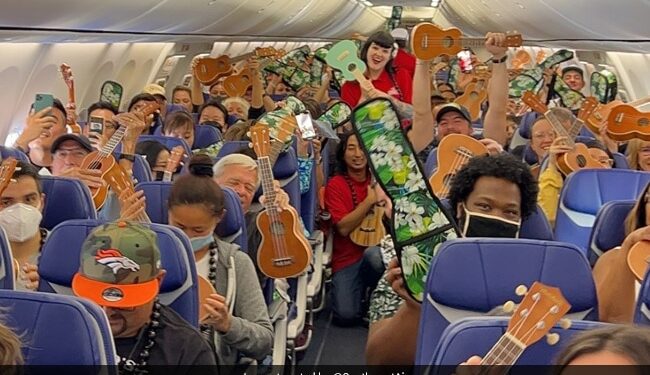 In a surprising incident, every passenger traveling from California to Hawaii on Southwest Airlines received ukuleles as a gift and a 20-minute onboard lesson to play the instrument at about 30,000 feet above sea level. The airlines partnered with a guitar company called Guitar Center to promote Hawaiian culture and “underline our daily commitment to serve and celebrate the spirit of Aloha,” the airlines told Today.

Southwest airlines tweeted a photo showing passengers ukuleles in their hands. The airlines in the captions said that by the time the passengers reached Hawaii, they were all pros. “We teamed up with @guitarcenter to surprise a flight full of customers leaving Long Beach with a ukulele and a lesson. By the time they got to Honolulu, they were pros,” read the caption.

We collaborated with @guitarcenter to surprise a flight full of customers flying out of Long Beach with a ukulele and a lesson. By the time they got to Honolulu, they were pros. pic.twitter.com/XsEx10sRJK

The passengers received a new Mitchell MU40 Soprano Ukulele from Guitar Center. While the passengers in the photo and video were quite elated by the surprise, social media users were less enthusiastic about the idea.

One user on Twitter wrote: “Looks like not everyone liked this PR stunt. It might be a good idea to send a survey to those who book their tickets to see if it’s worth it in instead of subjecting passengers to something they might hate. This makes me less likely to fly with you.” Another user read: “That sounds like a really, really awful surprise. I’m autistic and sensitive to sound. Being stuck in a plane full of people trying to play the ukulele for the first time would be an absolute nightmare for me.” “You hassled a whole flight for a promotional partnership?! As someone with sensory processing problems related to sound, I would have literally bent double in my chair, arms over my head, sobbing and having a panic attack,” commented the third. .