Hundreds evacuated after wildfires in suburbs of Greece 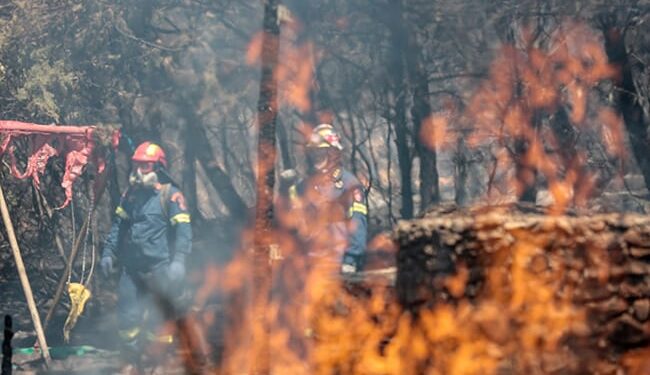 Greece has so far been spared the scorching temperatures caused by the heat wave.

Hundreds of people were evacuated early Wednesday as firefighters deployed planes and helicopters for a second day to fight a wildfire in a mountainous suburb north of Athens.

Nearly 500 firefighters, 120 vehicles, three planes and four helicopters sprang into action from dawn to dusk to fight the flames that spread to the suburbs of Penteli, Pallini, Anthousa and Gerakas, which are home to some 29,000 people.

No injuries were immediately reported, but at least 10 homes are believed to have suffered varying degrees of damage, state television ERT said.

“The sky was red… we left without taking anything,” a Pallini resident who lost his car and went up in flames told ERT.

The house next door was completely destroyed.

“The civil defense authority was late to warn us. The fire scorched our backs, we left in the nick of time. If we had stayed 30 seconds more, we would have burned ourselves,” he said.

Greek media reported that an 80-year-old man in Anthousa shot himself in despair over the blaze, which broke out Tuesday afternoon.

Greece has so far been spared the scorching temperatures that contributed to deadly wildfires in France, Portugal and Spain, which have devastated vast swaths of land, but has faced gale-force winds this week.

The wildfires at the foot of Mount Penteli north of Athens were sparked overnight by strong winds that constantly changed direction.

He added that the fire threatened businesses on a major highway in Athens.

“It’s a fire that will be a cause for concern for several days because of the flare-ups,” Kokkalis said.

Residents in several areas, a children’s hospital and the National Observatory in Athens were evacuated as a precaution. Police said some 600 people had been taken to safety overnight.

“It was insane, we didn’t know where to flee,” an elderly resident of Anthousa told ERT.

“Embers fell from the sky, I’ve never seen anything like it,” he said.

Traffic has come to a standstill on parts of a ring road around Athens, the company that manages it reports on Twitter.

Greece has set up a crisis cell and firefighters have fought 117 wildfires in the country in the past 24 hours.

Another 87 firefighters fought a fire in the Peloponnese, a southern peninsula.