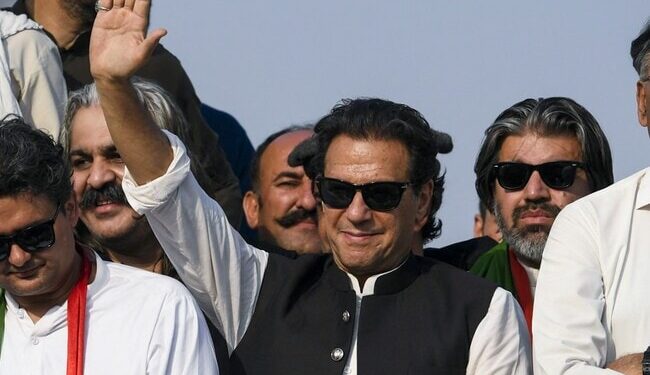 Pakistan: Imran Khan was removed from power by a vote of no confidence last month.

Pakistan’s deposed Prime Minister Imran Khan on Thursday warned the government to hold new elections or face more mass protests after he led thousands of supporters to Islamabad in a clash with his political rivals.

His morning speech was the culmination of a chaotic 24 hours in which the capital was blocked and clashes erupted between police and protesters across the country.

The government had tried to prevent the convoy from reaching the capital by closing all entrances and exits around the city, but was forced to let the protesters in by an emergency order from the Supreme Court.

Since being ousted from power by a vote of no confidence last month, the cricketer-turned-politician has stepped up pressure on the country’s fragile new coalition rulers by staging mass protests, alleging he had been removed from office. in a “foreign conspiracy”.

“I want to give the message to this imported government to announce elections within six days. Dissolve the assemblies and call elections in June,” he told a thinned crowd of thousands.

He warned that he would return next week to host another rally if no elections were scheduled, and called on his supporters to disperse.

The coalition government that has seen the country’s two normally feuding dynastic parties merge to push Mr Khan from power has repeatedly said it has no plans to hold elections.

Thousands of supporters of Khan’s Pakistani Tehreek-e-Insaf (PTI) party on Wednesday heeded his call to march from nearby towns to the capital.

But clashes broke out between police and protesters, who tried to clear roadblocks on major highways to join the convoy.

Police repeatedly used tear gas against protesters in the capital, as well as the cities of Lahore, Rawalpindi and Karachi.

Pakistan’s Human Rights Commission said it was “deeply concerned about the intractability of law enforcement agencies” in disrupting the march.

“The state’s overreaction has resulted in more street violence than it has prevented,” he tweeted.

The government led by Prime Minister Shehbaz Sharif had promised to stop protesters from entering the capital, calling the meeting an attempt to “divide the nation and promote chaos”.

But when chaos erupted across the country, the Supreme Court granted PTI permission to hold its meeting on the outskirts of the city.

The court also ordered the government and PTI leaders to conduct urgent negotiations over the political crisis and the release of supporters detained by the police.

More than 1,700 people have been arrested since police began raiding the homes of PTI supporters Monday night, said Interior Minister Rana Sanaullah, who previously accused protesters of planning to carry weapons during the march.

Khan dramatically joined the march, arriving in a helicopter that landed on a highway clogged with supporters at his power base in Khyber Pakhtunkhwa province.

The international sports hero came to power in 2018, voted in by an electorate tired of the dynastic politics of the country’s two major parties and supported by the country’s powerful military

He vowed to wipe out decades of entrenched corruption and cronyism and is alleged to have gotten into a fight with Pakistani generals.

He was toppled by opposition parties, in part because he failed to correct the country’s dire economic situation, including crippling debt, dwindling foreign exchange reserves and soaring inflation.

But Mr Khan maintains massive support across the country, especially among the young.