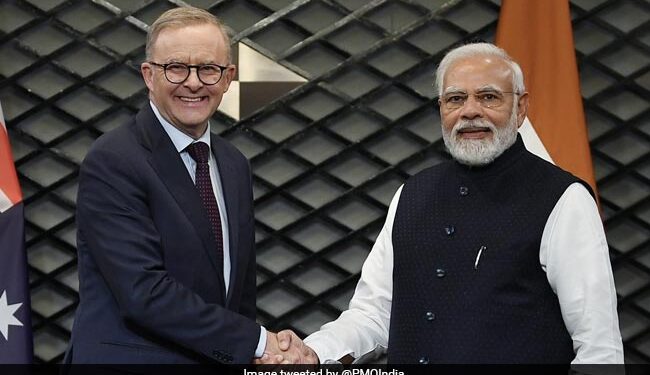 Prime Minister Narendra Modi held “fruitful” talks with Australia’s newly elected Prime Minister Anthony Albanese on Tuesday on the sidelines of the Quad Summit in Tokyo, during which the two leaders discussed multifaceted bilateral cooperation and reaffirmed their desire to deepen it.

The two leaders are in Japan for the Quad Leaders’ second in-person summit.

“Both leaders reviewed multifaceted cooperation under the comprehensive strategic partnership, including in the areas of trade and investment, defense production, renewable energy, including green hydrogen, education, science and technology, agricultural research, sport and people-to-people relations,” the statement said. spokesman. The Ministry of Foreign Affairs (MEA) reports this in a press release.

Both prime ministers reaffirmed their desire to continue the positive momentum in the bilateral relationship, it added.

“I warmly welcomed my meeting with @narendramodi for an exciting discussion on the full strategic and economic agenda of Australia and India, including clean energy technology. The ties between Australia and India have never been closer,” Prime Minister Albanian tweeted.

Warmly welcomed my meeting with @narendramodi for an engaging discussion on the full strategic and economic agenda of Australia and India, including clean energy technology. The ties between Australia and India have never been closer. pic.twitter.com/XF6g2mu3xH

“Renewed dynamism in the comprehensive strategic partnership between India and Australia. Prime Minister @narendramodi held talks with the newly elected Australian Prime Minister @AlboMP. Leaders assessed the multifaceted bilateral cooperation and confirmed their desire to deepen it,” he tweeted.

Earlier, the two leaders attended the Quad summit along with US President Joe Biden and Japanese Prime Minister Fumio Kishida.

Also at the Quad summit, Prime Minister Modi had complimented Mr Albanian by saying that his presence at the summit 24 hours after taking the oath showed his dedication to Quad.

“Today I had the pleasure of meeting PM Kishida @JPN_PMO, @POTUS and @narendramodi at the Quad Summit in Tokyo. We reaffirmed our shared commitment to the Quad and to a free, open and resilient Indo-Pacific. I look forward to it to host Quad Leaders in Australia in 2023,” tweeted Mr Albanese.

He said Australia will host the next Quad summit in 2023.