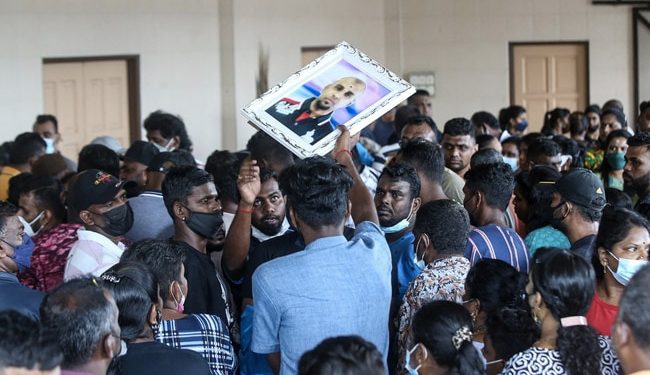 About 250 mourners gathered at Nagaenthran Dharmalingam’s house to pay their last respects.

Hundreds of mourners cried, read prayers and beat drums Friday at the funeral of a mentally disabled Malaysian man whose hanging sparked international protest in Singapore this week.

Nagaenthran K. Dharmalingam, convicted of smuggling a small amount of heroin into the city-state, was executed on Wednesday after serving more than a decade on death row.

His case sparked widespread outrage, with critics, including the United Nations and the European Union, saying that the hanging of someone with intellectual disabilities violates international law.

Singapore insists the death penalty has helped make the country one of the safest places in Asia.

In the hometown of 34-year-old Tanjung Rambutan, in northern Perak state, about 250 mourners came to pay their last respects, according to an AFP reporter.

Nagaenthran was a member of Malaysia’s Muslim-majority ethnic Indian Hindu minority, and the funeral followed community traditions, with sobbing relatives placing flowers on his coffin.

Prayers were read, drums beaten and fireworks were set off before the body was taken to a hearse to be transported to a crematorium.

“My brother was a wonderful person and we will miss him very much,” his sister, Sarmila Dharmalingam, told AFP.

“Our worst nightmares have come true.”

“My humble message to the world: please abolish the death penalty,” she added.

Nagaenthran was arrested at age 21 when he tried to enter Singapore with a bundle of heroin weighing about 43 grams (one and a half ounces), equivalent to about three tablespoons.

Supporters say he had an IQ of 69, a level recognized as a disability, and was coerced into committing the crime.

But Singapore has defended the execution, with its drug enforcement agency saying Nagaenthran “knew what he was doing” when he committed the crime and the courts found he had no intellectual disability.

Singapore resumed executions last month after a hiatus of more than two years, and activists fear authorities will start a wave of hangings.

But there was relief on Thursday for another Malaysian convicted of drug offences, Datchinamurthy Kataiah, after he won a bid to delay his hanging.

Datchinamurthy, who was found guilty of smuggling heroin into Singapore, was due to be executed on Friday, but it was postponed because he has a pending case in court.