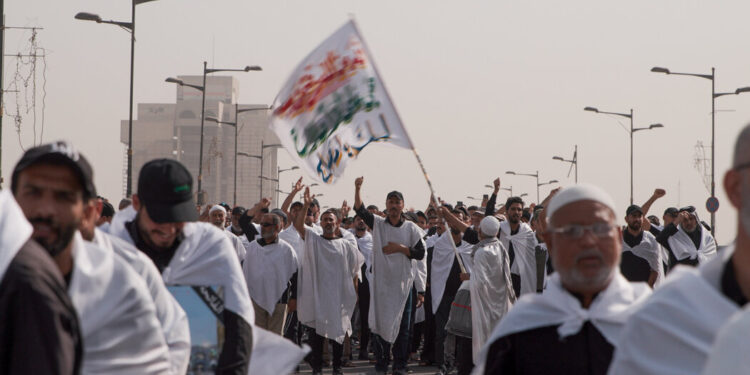 BAGHDAD – Iraqi political leaders have struggled unsuccessfully for the past 10 months to form a government, with their country sinking ever deeper into political paralysis from increasing drought, crippling corruption and crumbling infrastructure.

Those talks imploded in June. And now there is a struggle for power as Iraq’s major political factions battle for supremacy.

The powerful Shia Muslim cleric Muqtada al-Sadr, who leads the largest bloc in parliament, left the negotiations in frustration and then urged his followers to take to the streets to get what they wanted. They heeded his call and set up a tent camp that will block access to parliament for more than two weeks to prevent a government vote.

It is not the first time that Mr al-Sadr has resorted to the threat of violence to get what he wants politically. He led the armed Shia uprising against the US occupation of Iraq from 2003-2009, and US officials say they are now concerned that Iraq could plunge again into violence and instability.

Equally alarming, despite years of US efforts to turn Iraq into an alternative Shia power center that would be more Western-oriented than Iran, said Mr. Sadr and his Shia political rivals favor a political system that would grant more power to religious clerics along the lines of an Iranian-style theocracy.

“We are looking at the beginning of the end of the American-backed political order in Iraq,” said Robert Ford, a former U.S. diplomat in Iraq and now a fellow at Yale University and the Middle East Institute.

Iraq has slipped from crisis to crisis for decades – a cycle showing no signs of abating. After the US invasion of 2003 to oust Saddam Hussein, there was a civil war and then the takeover of large parts of the country by the Islamic State.

As a result, despite huge oil reserves, Iraq has remained mired in political chaos with a stagnant economy that has made its unemployed youth vulnerable to recruiters for extremist movements and investors suspicious. At the same time, the Gulf states under the leadership of the United Arab Emirates normalized relations with Israel and pushed through politically and economically to become the new center of gravity of the Middle East.

And the US vision of Iraq’s future seems to be slipping further and further.

When President George W. Bush invaded in 2003, his administration tried to encourage Iraqi political leaders to create a representative system that would more fairly distribute power among the country’s three main groups: the Shia majority and the Sunni Muslim and Kurdish minorities.

“The Americans more or less hoped that there would be cross-sectarian and more policy-oriented alliances between the political factions, but the sectarian and ethnic divisions won out,” said Mr. Ford. “Instead, we have this bickering between and within sectarian and ethnic communities about how to distribute Iraqi oil money.”

According to the World Bank, about 85 percent of the Iraqi government is financed from oil revenues. And under the current political system, every major political faction in parliament gains control of at least one ministry, and with it patronage jobs and the ability to skim money and pocket money.

Because politicians have focused more on their own power than on national interests, Iran has found it easier to convince a number of Sunni, Kurdish and Shia leaders to support the policies it cares about most; the cross-border movement of Iranian weapons, people and goods.

The crisis now enveloping Iraq pits Mr Sadr and his mainly Shia supporters against a coalition of Shia parties with militias linked to Iran in a bitter power struggle. The interim government, fearing violence, has been reluctant to break Mr Sadr’s blockade, which allowed him to hold the country hostage to an extensive list of demands: the dissolution of parliament, new elections and changes to the electoral law and possibly the constitution.

“It looks like a peaceful coup, a peaceful revolution,” Mahmoud Othman, a former MP who was not affiliated with any political party, said of the sadrists’ blockade of the parliament. “I say peaceful because his followers don’t carry weapons. Sadr is stronger than weapons. He is now the strong man on the street and he imposes his will on others.”

So far, the blockade has not been violent.

Several thousand sadrists occupy the tent camp and work in shifts. They wander around, listen to clerics denounce government corruption and eat shawarma, grapes and watermelon donated by sympathizers. They rest in tents in the heat of the day, waiting for Mr Sadr’s next instructions via tweet – his preferred means of communication.

Sunnis and Kurds have remained on the sidelines.

Many Sunnis say they feel powerless and see no role for themselves in the future of Iraq, and many wonder if it would not be better to divide the country and have a separate Sunni enclave, said Moayed Jubeir Al-Mahmoud, a political scientist at Anbar University in the city of Ramadi, a Sunni stronghold.

“Unfortunately, I do not see a secure and prosperous future for my country,” he said, describing Iraq as a failed state controlled by Iran-affiliated militias. “We are concerned that the state will go from being dominated by militias to dominated by al-Sadr.”

The United States and most neighboring countries have been largely silent about the chaos in Iraq. Only Iran has attempted to intervene by meeting Sadr’s Shia opponents and encouraging negotiations, although Sadr, a nationalist, has taken a strongly anti-Iranian stance in recent years.

The last thing Iran wants is for Shias to fight each other and risk weakening their grip on power, which could ultimately undermine Tehran’s influence in Iraq.

Some of Mr Sadr’s views are in line with Tehran. Both want to force the remaining 2,500 US troops to leave Iraq, oppose any interaction with Israel and support the criminalization of homosexuality.

This is not the first time Mr Sadr has resorted to mass demonstrations. But this time, he’s using street protests to force the country to ignore last October’s election results and hold another vote that could bring his lawmakers back to power.

The parliamentary elections of 10 months ago went well for Mr Sadr. Legislators backing him won the most seats of any faction and nearly forged a governing coalition backed by Kurdish and Sunni partners. The next step would have been to put it to a vote for approval.

However, Mr Sadr’s Shia rivals refused to attend the Parliament session, denying him the quorum needed for a vote. Frustrated, Mr Sadr asked his lawmakers to resign in protest.

The parties that got fewer votes, mainly his Shia rivals, then filled the seats left by Mr Sadr’s followers, potentially giving them control over ministries and government offices and leaving Mr Sadr out of the picture.

He responded by calling for a blockade of parliament to prevent a vote on a new government.

“So this is when Muqtada al-Sadr decided that if the democratic procedures don’t play out, the response is a revolution,” said Rend Al-Rahim, a former Iraqi ambassador to the United States and the president of Iraq. Foundation, a non-profit organization that promotes democracy.

The atmosphere at the tent camp is decidedly Shiite. Last week, followers of Mr Sadr marked Ashura, who commemorates the death of Hussein, a grandson of the Prophet Muhammad. His death is often portrayed as the beginning of the division between Sunni and Shia Muslims.

There were signs of support for Mr Sadr’s cause everywhere: even some of the very poorest helped pay for a tent or meals. A water company donated enough each day to fill the large tanks that supply the tent residents. The markets in Sadr City – a poorer part of Baghdad full of Sadr loyalists – sent crates of tomatoes, onions, dates, grapes and apples.

“It is the first time that we have electricity 24 hours a day,” says Faiz Qasim, an enthusiastic Sadr organizer who usually works as a day laborer. Much of Baghdad suffers from daily power cuts.

Sadr supporters from southern Iraq prepared large cauldrons of stews every day. One day it was a rich curry chicken, while the next the meal nearby—a black and white cow tethered to a cell phone tower—calmly munching on some watermelon. A little further down the same street, another cow was slaughtered for dinner that night.

Clergymen periodically gathered groups of men – there are almost no women in the tents – with chants against the current political leaders:

“A lot of people were bothered by those who were here in this swamp.

They climbed to power on the backs of the innocent and Iraq suffered under them.

There are many people who stretch out their hands, beg in the street and go through the garbage.

Al-Sadr says America and Israel have the money and the weapons. But what do we have?