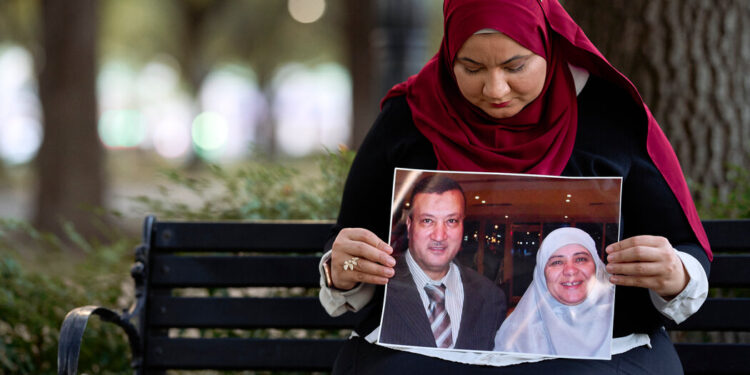 For a time, Mr Abd El Fattah shared a prison complex with a former presidential candidate, 71-year-old Abdel Moneim Aboul Fotouh, who suffers from conditions the United Nations has listed as life-threatening, including angina, prostate disease and kidney stones. He has received almost no medical attention other than basic tests, according to the UN.

But the authorities do not reserve such treatment only for prominent prisoners.

Ahmed Abdelnabi and his wife, Raia Hassan, boarded a flight from Cairo to Istanbul in December 2018. Their daughter, Nosayba Mahmoud, said they planned to stop in Turkey on their way to Dallas to visit her.

But in Istanbul they never got off the plane.

Three hectic weeks later, the family learned that a lawyer had seen the couple at an Egyptian prosecutor’s office. Security agents had arrested them before takeoff.

When Ms Sallam, Mr Abdelnabi’s lawyer, saw him, she said that he had difficulty moving the left side of his body, which was covered in red, caused burns from repeated electric shocks and that he could barely see.

“Just the idea that they weren’t taking their meds, that they were under tremendous psychological pressure, that they weren’t eating, showering, dressing, let alone not knowing where they are and what’s happening to them. – it’s traumatic,” said Ms. Mahmoud, 37. “You don’t know if your loved ones will survive or be killed.”

Requests for comment sent via a government spokesperson to the Egyptian prosecutor’s office, prison officials and the presidency went unanswered. But officials have said some politically motivated arrests were needed to restore stability after the turbulence of the 2011 Arab Spring revolution.