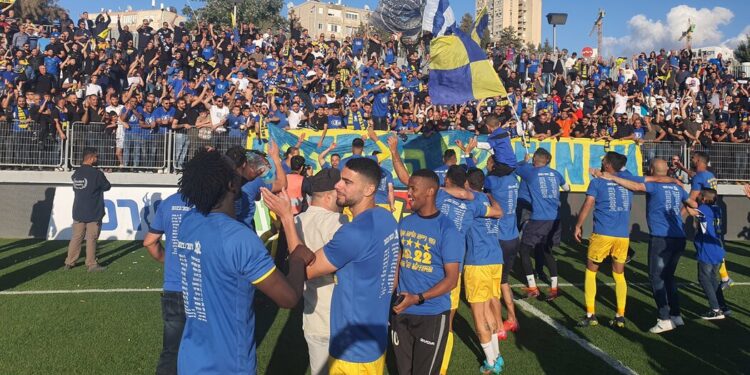 REINEH, Israel — Jamil Bsoul laughs. The mayor has already clearly stated this line. But after all its community football club has accomplished, and in such a short time, that’s what makes it fun.

“Before the season started, everyone said we had no chance to stay in the second division,” said Bsoul. “They were right. Because we have gone up.”

His community’s soccer team, Maccabi Bnei Reineh, only existed six years ago. Less than two years ago, in September 2020, a largely unknown club from a small Arab village of 18,000 inhabitants near Nazareth was preparing for yet another season in the Israeli fourth division. Now, after three promotions in quick succession, the name Maccabi Bnei Reineh is on everyone’s lips in Israeli football.

To the surprise of even the villagers, the team’s success has put the community firmly on the map.

“This is a small place,” said Jamil’s cousin, team manager Anwar Bsoul. “When people from Reineh went to Tel Aviv or Jerusalem, they always said they were from Nazareth. Otherwise no one would have understood.

“We had to explain to agents where the club is located. However, this has now changed, as we have become famous. Now people everywhere want to talk about Reineh.”

It is not uncommon to see an Arab team in the Israeli top flight. Bnei Sakhnin has been playing there for two decades, winning the State Cup in 2004 and representing the country in the UEFA Cup. Hapoel Tayibe and Maccabi Ahi Nazareth also enjoyed short spells in the first division.

However, the rise of Maccabi Bnei Reineh felt even more special, especially as the club was founded in its current form in 2016.

“There was no football in the village for 13 years – in fact there was no sports activity at all,” said Said Bsoul, a businessman from Reineh who owns a construction company. “We wanted to change that and unite people through football.” He made a small initial investment and became president of the club.

The project started in the fifth division, the lowest in Israel, with a team of local players. Only 10 to 20 fans supported the club at the time. When Maccabi Bnei Reineh won promotion after his debut season, it soon became clear that life in the fourth division was not easier. The club had no stadium – a problem that had to be solved weekly – and fans usually had to travel to games with their own generator to have power.

In 2018, Said’s uncle Jamil Bsoul was elected mayor of Reineh, and he arranged modest municipal funding for the club. “Football is about togetherness,” said Jamil Bsoul. He encouraged local youth to create an “ultras” club; it now counts about 350 people as members. “We have the best fans in the country,” Said Bsoul said, claiming that “they are always positive and don’t even swear.”

In the 2019-20 season, Reineh battled for a second consecutive promotion when the Israel Football Association suspended the league season in March due to the coronavirus pandemic, with the team in second place. Only the top club was promoted to the third division and Reineh’s progress seemed to stagnate. But when the financial crisis of the pandemic led to two third division clubs merging, a new seat came up on the table. A federation judge ruled that Reineh could have it.

Initially, playing in the third division seemed like a achieved goal, but Said Bsoul saw an opportunity. He knew the season would be shorter because of the pandemic, “and so we were able to attract better players because there were fewer months to pay their salaries,” he said.

He suggested the team approach the shortened season as an opportunity to dream bigger, to see how high it could climb. Betting on oneself paid off: Maccabi Bnei Reineh again promoted to the second division.

“Suddenly we were playing against big, traditional clubs with a huge history,” said Anwar Bsoul, Said’s brother and business partner. “We were a little worried that we might have gone too high.”

The team budget of 4.5 million shekels (about $1.3 million) was by some distance the lowest in the division. Anwar Bsoul said this meant Reineh could only attract players who had been thrown out by other teams. But that also had its perks: The recruits, he said, “arrived motivated to prove their worth.”

In preparation for her first season in the second division, Reineh traveled to her first training camp outside Israel, in northern Italy, last year. One of the matches was a friendly against Atalanta – a Champions League regular from Italy’s top league, Serie A. When Reineh went off track with a 1-1 draw, Said Bsoul said: “That’s when I understood that we had a really good have a squad.”

Reineh started the season strong and never gave up, eventually taking the last in his run of promotions. It is the smallest club ever to reach the highest level in Israel.

What awaits is Reineh’s biggest challenge yet. Its rivals in the 14-team Israeli Premier League include not only champion Maccabi Haifa, the largest northern club, which is very popular in the Arab community, but also major domestic clubs such as Maccabi Tel Aviv, Hapoel Tel Aviv and Beitar Jerusalem, whose notoriously racist, Arab-hating ultras once traveled to Reineh – when Maccabi Bnei Reineh was still in the fourth division – to abuse the team and its fans for a cup match.

“They even came to our village and wrote insults on the walls before the match and behaved violently during the match,” said Basel Tatour, one of Reineh’s ultra-leaders.

Tatour said his team has become a unifying force in a place where such connections are often fraught. “Thanks to football, everyone in the village got to know each other,” he said of Reineh’s most devoted fans. “We are all friends now. There are 70 percent Muslims and 30 percent Christians, but you don’t know who is who.”

In the view of the Bsoul family, this is just the beginning.

A year ago, a football academy was established in the village, where 300 children from 7 to 13 years old train and play on a new synthetic turf field. Last month, veteran Haifa-born coach Yaron Hochenboim was hired as the team’s sporting director. He will oversee everything on the field from the basic programs to the senior team.

The next dream is a modern stadium in the village. The team currently plays its home games in a nearby Jewish town, Nof HaGalil, but its ambitions are greater than ever: a 20,000-seat stadium in a village of 18,000, as part of a complex that will also include facilities for swimming, cycling and track and field.

“I told them how important the club is to our community,” said Jamil Bsoul, the mayor. “It unites everyone and you see children, women and the elderly come to watch matches and even training. Even my 98-year-old mother got excited and asked to watch the promotional game on TV for the first time in her life.”