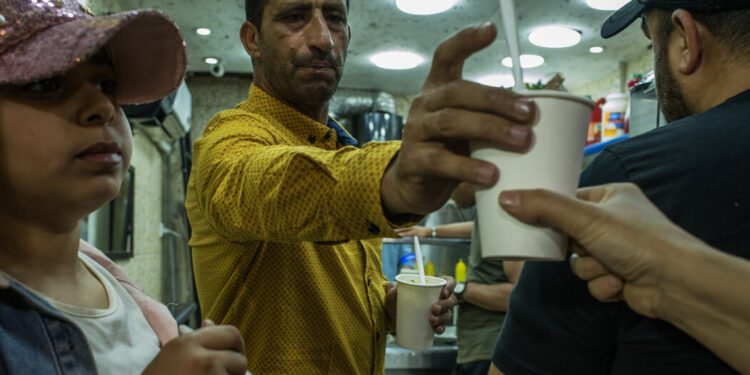 AMMAN, Jordan — The idea hit the restaurateur like a bolt of lightning after he spilled food on his suit while eating in his car.

What if he took Jordan’s national dish — a milky mountain of mutton and rice called mansaf, traditionally eaten by hand from a large communal platter — and sold it in a paper cup to guests on the go?

The restaurateur, Muhammad Taher, soon opened his first shop, Our Mansaf in a Cup, offering takeaway food for the bargain price of one dinar, about $1.40. Business flourished and three more branches followed.

“People were surprised at first,” recalls Mr. Taher, 52. But tasting was believing, and he said some customers gushed, “‘Blessed for giving us something we’ve been craving for so long.'”

However, not everyone praised his culinary innovation in this conservative Arab monarchy where traditions such as mansaf are closely linked to national identity.

Copycat restaurants popped up and cut into Mr. Taher’s profits, even as traditionalists accused him of degrading the national dish and eroding the cultural foundations of the nation itself.

“Destruction begins with small details,” warned Abdul-Hadi al-Majali, a newspaper columnist who mocked the idea of ​​mansaf in a cup.

“What is happening is not only a matter of food, but also a way of mocking the heritage of the people,” added Mr al-Majali. “And mocking a people’s heritage in this way is a prelude to downplaying what’s most important and diluting or dissolving identity.”

The mansaf dust-up has shaken the kingdom for the past two years, pitting traditionalists against innovators, those who eat with their hands against those who eat in their cars, and begs the question of how much a culinary tradition can change before it dies. roots.

For Muhammad al-Tarawneh, a mansaf chef in the central Jordanian city of Karak, considered the home of the dish, the answer was clear: mansaf in a cup is just wrong.

“They took the dignity away from mansaf,” he said.

Al-Tarawneh recently spoke in the busy kitchen where he and his 15 employees produce huge quantities of traditional mansaf for weddings, funerals and other special occasions. That day’s order was for about a thousand wedding guests, so the day before preparation had begun with the slaughter of 73 sheep to yield one and a half tons of mutton.

To finish the mansaf, the meat was cooked on the bone in huge metal cauldrons. The cooks dissolved large white balls of a dehydrated sheep yogurt known as jameed in giant pots to make a salty, milky soup.

When the meat was partially cooked, the cooks drained the water it was cooked in and replaced it with the milky mixture. The meat cooked in the milk until tender, creating the signature mansaf combination.

When everything was ready, the cooks collected the plates.

Over a layer of flatbreads on large, round metal dishes, they piled heaps of rice cooked with ghee, decorated with milky meat and topped it all with roasted nuts. The dishes – about 200 in all – were covered in foil and loaded into a fleet of vans that transported the delicacy to the wedding.

More than a thousand men showed up for lunch, seated in a square of tents full of small tables on the edge of town. A smaller number of female guests ate separately at the groom’s home.

When it was time to eat, workers handed out the dishes, while an eager diner fired his pistol into the air — a tradition the Jordanian government has sought to stamp out with heavy fines.

Strict rules direct mansaf’s food, said Muhammad al-Tarawneh, a lawyer from Karak who is not closely related to the chef.

“Mansaf has his own rites and rituals standing here,” he said.

He removed the foil and poured extra milk over the rice, which added flavor and made eating easier.

Mansaf is often eaten standing up, which according to experts allows you to eat more. Using only their right hands, the diners ripped meat off the bones, squeezed it into balls of rice and milk, and popped it into their mouths.

Since many people share the same dish, every diner eats right in front of him: reaching over the serving dishes is frowned upon.

Often the head of the sheep is placed in the center of the shell. His cheeks, eyes, brain and tongue are highly prized and intended for the most important guest at the table.

Few men at the wedding were interested in mansaf in a cup.

“Not at all,” said Mr. al-Tarawneh, the lawyer. “We respect mansaf.”

Ahmad al-Jafari, a retired school principal, said he ate a light breakfast to allow more room for mansaf, a common practice. Just the idea of ​​mansaf in a cup made him uncomfortable.

“It is more blessed when people gather to eat rather than eat alone,” said Mr al-Jafari, 70.

The mansaf-in-a-cup experiment kicked off in the capital Amman, along a street lined with cars blaring pop music and pedestrians walking through the shoes, clothes, jewelry and other merchandise displayed on the sidewalks.

It was here, in early 2020, that Mr. Taher Our Mansaf in a Cup opened. The sale started and the guests lined up to try the new spin.

Others noted his success, imitators soon appeared in Amman and other cities, and Mr. Taher eventually closed his business.

Two stores are now vying for business where it once stood.

The orange sign above one of those competitors, Mansaf in a Cup, features a cartoon of a laughing Jordanian man showing off his meal. Neighboring Uncle Mansaf in a Cup has a giant yellow sign with flashing lights in the colors of the Jordanian flag.

In yet another insult to tradition, both stores use beef instead of mutton. That’s because beef is cheaper and is cooked boneless, making it easy to eat with a spoon. And instead of cooking together, the meat and milk are cooked separately.

Two curious teenagers ordered from the first store, and the chef, Islam Adli, 23, filled two paper cups with rice, added three pieces of meat and some nuts, poked plastic spoons and poured milk over the top of a plastic pitcher. .

Mr Adli talked about the benefits: you could eat it on the go; vegetarians could order it without meat; and it was cheap – a good option for Jordanians on a budget or far from home.

In the other store, chef Muhammad al-Bitoush, 29, sent the haters away. But he also acknowledged that he was from Karak and had not told his family what he sells, in order to avoid controversy.

“The idea that mansaf has ended up from the saucer into a cup would bother them,” he said.

A steady stream of eaters trickled in.

Waed Faouri, 25, and her mother ordered two cups of mansaf which she described as “good and tasty”.

“Yes, we cook mansaf at home, but sometimes when you hang out outside your house, you crave mansaf,” she said.

Later that evening, Nayef al-Jaar, the manager of Uncle’s Mansaf in a Cup, said he was concerned that the novelty of mansaf to go was fading and demand was declining.

“In the beginning, people were queuing up for it,” he said. “Now I have to beg people to come and eat mansaf.”

So he pushed for a new idea that he hoped would bring back the crowd: French fries in a cup with ketchup, mayonnaise, and nacho cheese.